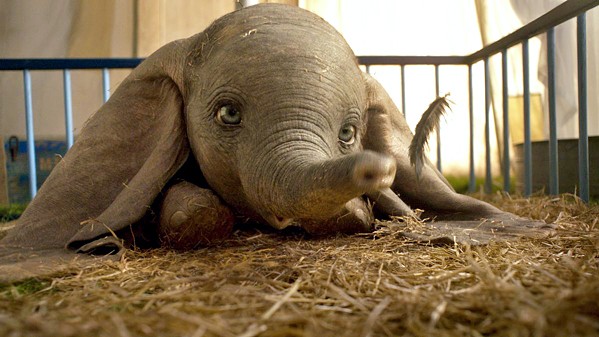 Caleb Darn you, Dumbo, trying to tug on my heartstrings when all I want to do is nitpick about your imperfections (the movie's, not the elephant's!). It's hard to hold back tears when the song "Baby Mine" starts playing, as baby Dumbo extends his trunk to reach the barred window of his mother's cage. The separation of the titular elephant and his mother is at the heart of both the 1941 animated original and this live-action remake from appropriate director Tim Burton (Edward Scissorhands, Big Fish, Alice in Wonderland). Unlike the original, however, this story centers on brand-new human characters rather than anthropomorphized animals. So don't expect to see anything on all fours talking, contrary to other recent Disney remakes like The Jungle Book and the upcoming Lion King. Timothy Q. Mouse still makes a fun cameo appearance, but his role as Dumbo's friend and protector gets transferred over to two human children, Milly (Parker) and her brother, Joe (Hobbins). The siblings try to convince their father, circus worker Holt Farrier (Farrell), that Dumbo has the ability to fly. Of course, he scoffs at the fantastical notion, but can we really blame him? He is a dad in a Disney movie, after all. And as every good Disney parent knows, the first rule of parenting is: Never believe your children, especially when it comes to the supernatural. Second rule: Apologize to them later for not believing after the big "I told ya so" moment.

Karen Aside from the two kids and their father, there are a few other new characters and side stories in the film. If you know Dumbo's story, you know that he's separated from his mother and made into the circus's main act. There are a couple of twists with this version of the story that I don't want to give away, but they involve Keaton as V.A. Vandevere, the owner of an over-the-top amusement park. His role in the grand scheme of things is to have Dumbo for his own main circus act with his girlfriend (or trophy wife?), Colette (Green). Dumbo is just the kind of character that Burton works with in all his films, a lovable misfit. We've seen this protagonist multiple times, but it feels like a new story because we're so captivated by the worlds that Burton creates. But unlike Burton's previous otherworldly and surreal masterpieces, Dumbo falls very flat for me. While it's visually captivating, the story—or maybe the writing—just didn't cut it for me. I was also very surprised that Burton could make such a sensitive and moving film dreary. 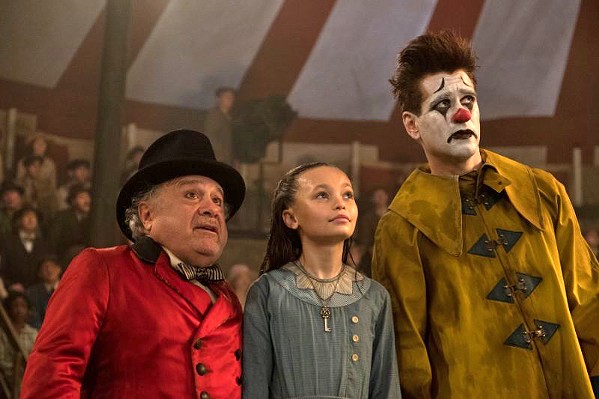 Caleb I think it's definitely the script's fault. Vandevere is especially poorly written. His motive for keeping Dumbo away from his mom is so counterproductive to his actual goal, it's purely plot driven and quite infuriating. Having said that, hiring one of the screenwriters behind three consecutive Transformers movies to adapt a cartoon about a baby elephant was a bold move. I'd love to have seen this CGI version of Dumbo take down some Decepticons. But back to the cast, don't forget about DeVito as Max Medici, the circus's ringmaster. I'm a huge Batman fan, so seeing Burton, Keaton, and DeVito reunite for the first time since 1992's Batman Returns was a consolation prize of sorts. It's a really mixed bag, but I still feel like it's worth seeing on the big screen. There's enough visual majesty to warrant a theater viewing, even with such a thin story. I'll probably check out the Blu-ray, too, when it comes out, just in case there's a deleted scene of Dumbo transforming into a Fiat convertible before duking it out with Megatron and Starscream. Move over Optimus Prime, there's an elephant in the room, and his name is Dumbo.

Karen I think there are too many side stories that might fly over a child's head when they see this movie. First and foremost, you have essentially a little boy ridiculed for looking different (a baby elephant with gigantic ears) and separated from his mother. Then there are the two kids who are dealing with the loss of their mother and a father who came back from war after losing a limb and who isn't the best communicator. Throw in a failing circus and a money mogul, and it's a lot to keep up with, and none of it is cohesive. There's even a small role for Alan Arkin, who, if I'm going to be honest, acts like he wandered into the story and went with it. But then again, when I rewatch movies I enjoyed as a child, I notice a lot of things as an adult, so maybe this is one of those movies for kids. As spectacular as this film may seem and is—again, only visually—I attribute that to longtime Burton collaborator Colleen Atwood, who worked on the costume design for the film. I think almost everyone has a huge TV screen at home, so if you wait for the DVD to come out, I don't think you're missing much if you skip seeing it in theaters. Δ