Sierra Club leaders are crying foul after two elements in SLO County’s Local Coastal Plan that could prohibit vehicles on a tract at the Oceano Dunes were mysteriously omitted from a staff report that was presented to the Planning Commission in January last year during deliberations about the sale of the property to the state.

The state has leased the land for free from the county for 20 years in exchange for assuming the county’s liability for it. The formal lease expires next month and folks who oppose the use of off-road vehicles at the dunes are jumping at the opportunity to get them off the county property. The Sierra Club argues that off-roading there conflicts with the county’s General Plan and should stop. 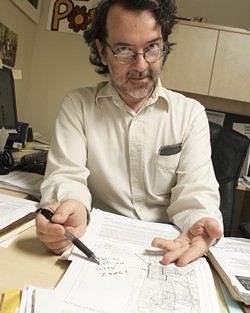 Mysteriously, at least to Sierra Club leaders, both the map and the clause went missing in a county-produced staff report.

The deletions were discovered by the local club chapter while preparing a lawsuit filed on April 14 this year against the county and state to block the use of off-road vehicles on the property.

While Andrew Christie, director of the Santa Lucia chapter of the Sierra Club, thinks the omission was deliberate, Matt Janssen, director of public information with the County Planning Department, called it an “anomaly.”

At issue is the so-called figure four from the Local Coastal Plan. It’s a map that clearly shows a county-owned “buffer area.”

Also missing from the staff report, in a paragraph specifically referencing the county-owned area, is the sentence: “The map of ORV [Off Road Vehicle] use areas indicates a buffer area along these critical interface areas.”

In the county-produced staff report, meant to describe the law that would apply to a potential sale, there isn’t any reference to the map, and neither item was mentioned during the verbal presentation at the Jan. 25, 2007, Planning Commission meeting.

At that meeting, Christie brought the map forward—he wasn’t aware of the missing language at that time—and subsequently the commission determined that current state use of the property was not in conformity with
the plan.

Negotiations to sell the plot have been ongoing.

Now the finger pointing has started, and most of them seem aimed at Janssen.

Janssen called the accusations of wrongdoing “laughable.” He noted that he is a former Sierra Club member, and besides, he said, “What would I have to gain?”

In fact, his response to the debacle is that the missing map itself is not accurate.

The quandary about whether off-roading on the tract is consistent with the plan is complicated by the fact that the Coastal Commission almost simultaneously approved the map, which clearly shows a “buffer,” and approved a permit with the state for the use of off-road vehicles. It would seem then, that the permit was contrary to the Local Coastal Plan. Janssen’s response is that for 20 years, the county has been meaning to revise the map.

“Ever since the Coastal Commission issued a permit allowing use of that area,” Janssen said at the 2007 Planning Commission meeting, “and the fact that we have a certified [Local Coastal Plan] map that shows it’s a buffer area, we’ve been intending to change that map.”

The county land is now in a sort of limbo as complex negotiations continue. But the state, which last offered more than $4 million, is now is in a financial crisis, and thus considered unlikely to sweeten its offer.

After June, the county will begin leasing the land on a month-to month basis for up to two years.