by Kathy Johnston and Ryan Miller

One of the last speakers in the public comment session at the April 17 SLO County Board of Supervisors meeting paraphrased a Shakespearean cliche "To sell or not to sell?" as he added his voice to the scores who spoke before him.

The question involved the possible $4.8 million sale of 584 acres 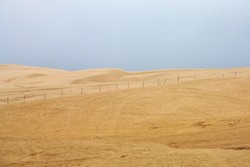 # in the Oceano Dunes State Vehicular Recreation Area and Pismo State Beach Dune Preserve to the State Department of Parks and Recreation.

The answer, however, is still hanging over the heads of everyone who participated in the more than 12-hour meeting. Ultimately, the supervisors agreed with Katcho Achadjian abstaining due to a possible conflict of interest to enter a closed-door session for negotiations. Supervisor Jim Patterson, speaking the day after the meeting, said that the closed session, set for April 24, falls under the auspices of a real-estate negotiation. That meeting will be "to see where we want to go, and perhaps more clearly define our collective opinion," Patterson said.

Throughout the day of the meeting, dozens and dozens of people approached the podium to voice support for or speak against the sale. Many showed pictures or PowerPoint presentations depicting vehicles cruising through sand and water. One photograph showed a dead bird crossed with tire tracks.

Public comment participants ranged from relative newcomers to the area to residents whose history near the dunes goes back decades. They spoke about leasing options, reminisced about years of off-roading, worried about lost revenue if tourism patterns change, cited global warming as a negative side effect of off-road vehicle recreation, questioned the boundaries of land involved in the sale, and emphasized the uncertainty of the future.

The issue of local control came up repeatedly, with several speakers voicing concern that a sale to the state would take the county and nearby communities out of the picture.

One Oceano resident likened the situation to the Russians selling Alaska or the French selling the Louisiana Territory.

"Your names are going to go down in history," she told the board, comparing them to historic governments that sold vast swaths of land. "However, money is not the issue."

She paraphrased Mark Twain to emphasize her concern: "Hold onto the land they're not making no more."

The idea of the issue being a "three-legged stool" also came up, with environmental protection, support for recreation, and the welfare of the community representing the necessary balance.

The first signs of a delayed decision came when Supervisor Patterson noted that the reality is that the board can't please everybody.

"Tonight I think I run the risk of not pleasing anybody," he said before stating that he didn't feel prepared to make a decision.

He proposed a meeting between several key players and agencies involved in the dunes to develop a strategy for addressing the complex issues that have come up over the last two months.

Supervisor Jerry Lenthall said that the appropriate action would be to postpone a decision until they could come back to a closed session with "fresh minds."

Concerns of a time crunch also surfaced during the meeting. Daphne Greene, deputy director of California State Parks OHV Division, emphasized that the state had acted based on the county's interest in a sale and that the timing of a vote is critical.

"Elaborate why we're under the gun here to make a decision when we have 14 months really to sort this out," Patterson said, noting that the county's 25-year lease with the state doesn't expire until June 2008.

"We worked very hard, very hard to secure this funding," Greene said, adding that dollars set aside for at least one phase of the purchase would have to be re-appropriated this June if a sale doesn't go through.

She conceded that a decision at the next board meeting would probably be fine, but voiced concern that further delays could cause the state Department of Finance and the Legislative Analyst's Office to raise a collective eyebrow at the apparent reluctance to accept the offer.

Lenthall said the board would "develop punctilious diligence" to make the decision, and stressed that the "window of opportunity" would be discussed in the closed session as well.

"We are moving forward in a good faith assessment of the offer that's before us," Supervisor Bruce Gibson said.