Dust bust: Even as stakeholders make small advances, air pollution is still a problem on the Nipomo Mesa

Public meetings are hardly strangers to unhappiness, but the feelings of frustration that pervaded the Nov. 12 meeting of the Air Pollution Control District (APCD) Board of Directors were rather exceptional.

What was agendized as a simple informational update on the state of air pollution mitigation efforts at the Oceano Dunes State Vehicular Recreation Area (ODSVRA) turned into a fiery and contentious back-and-forth between aggrieved parties. 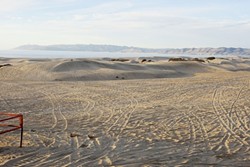 Board members disappointed by mitigation efforts thus far sparred with board members preaching patience. Citizens concerned about poor air quality on the Nipomo Mesa clashed with citizens supportive of off-highway vehicle (OHV) riding and concerned about regulatory overreach. Throughout the roughly 90-minute hearing, nobody seemed to be happy.

At meeting’s end, the well-worn and politically supercharged issue of what to do about harmful dust emanating from the Oceano Dunes (and the OHV activity that exacerbates the effect) continued to follow its historical pattern: one step forward, two steps back.

“The progress here is glacial,” APCD Board Member Joe Costello said at the Nov. 12 meeting. “Let’s melt the glaciers a little bit, folks.”

The big bombshell at the meeting which surprised many attendees—was that State Parks will officially be unable to meet the conditions of the APCD’s controversial “dust rule” by the May 31, 2015, deadline set in 2011.

In part, the rule requires State Parks to meet state air quality standards on the Mesa by that date. Speaking at the meeting, Christopher Conlin—deputy director of State Parks’ OHV Division—cited limited resources and said his staff is aiming for a 15 percent reduction in dust pollution, aiming to stay below the less-stringent federal threshold.

In 2013, air quality exceeded state standards on the Mesa on 95 different days, and it pushed past federal standards twice. Those numbers remained largely unchanged in 2014.

“We would like to see further progress and have State Parks meet the state performance standard, but that doesn’t appear to be possible,” APCD Executive Director Larry Allen said at the Nov. 12 meeting. “We’re as frustrated as the [APCD] board and the public is out there.”

In the wake of the meeting, the spectrum of belief regarding future efforts to minimize air pollution on the Mesa ranges from optimism to cynicism.

“We’re doing more than we’ve ever done on the ground,” Brent Marshall, district superintendent for the ODSVRA, told New Times. “We’ve settled our procedural and legal issues, and we’re building projects on the ground to address the problem.”

Marshall said he’s optimistic about the future of the dust issue, noting that State Parks temporarily installed 15 acres of wind fencing and more than 5,000 hay bales during the March-to-June windy season in 2014 to combat dust pollution, and has plans to do even more during the same season in 2015.

“We’re still finalizing exact plans with the Coastal Commission, but we’re planning on installing 30 acres of wind fencing—so doubled—and it’ll be located in different, more effective positions on the dunes,” Marshall said. “I can definitely sympathize with Mesa folks who are worried about their air, but if doubling our efforts isn’t enough, I don’t know what else we can do.”

Marshall added that State Parks and the APCD are also concurrently working on drafting an environmental impact report for a long-term, more permanent mitigation plan to meet state air quality standards. Though that project is still several years and multiple procedural hurdles from actualization, Marshall said he has high hopes.

“We want to be good upwind partners, and we have to be a benefit to both residents and recreationalists,” Marshall said. “We strive to follow the law and provide an awesome recreation experience.”

For his part, the APCD’s Allen falls more in the middle on the belief spectrum.

“The biggest concern I have is that the public health continues to be placed at significant risk with every single delay,” Allen told New Times. “This is causing significant angst, and I agree and empathize with Joe Costello’s comment on the glacial progress.”

That said, Allen said he and his staff are doing their absolute best with the hand they’ve been dealt. He also pointed to the recent resolution of long-debated legal and procedural issues with State Parks, the more-permanent dust mitigation plan in development, and the founding of a joint science and data team as signs of some (if not ideal) progress.

“We have a lot of pieces in place now that should help us make expeditious progress,” Allen said. “It just took a long time to get here.”

What optimism Allen has regarding this issue is tempered by years of dealing with obtuse bureaucracies and his personal insistence that dust mitigation efforts shouldn’t be diluted.

“[State Parks] always says this is an iterative process—and that’s true—but each increment in the process has to be significant in terms of improving air quality,” Allen said. “We need the plans to be aggressive.”

By striving to stay under the federal threshold for now, Allen and Marshall have both said they are hoping to avoid a federal intervention from the Environmental Protection Agency, which would bring unclear (but ostensibly draconian) air quality protection measures completely divorced from local control.

“EPA consequences are all things that nobody wants on the local level,” Allen said. “The 2015 mitigation measures will have to be much more substantive—we need a clean year.”

However, in the opinion of Arlene Versaw—a Nipomo resident, air quality activist, and founding member of Citizens for Clean Air—an EPA intervention might not be the worst possible outcome.

“Maybe something would actually get done if the EPA came in,” Versaw said. “There’s clearly nothing getting done now.”

Versaw definitively falls on the cynical end of the belief spectrum, and is intensely skeptical and critical of State Parks’ plans to mitigate dust on the dunes.

“What I’ve seen over the years is the collective failure of public agencies—from top to bottom—to protect the public welfare,” Versaw said. “The solutions are there; the only thing that’s lacking is will, particularly on the part of State Parks.”

Versaw’s preferred mitigation solution is to restore vegetation on the “fore-dunes” and rotate the riding area for OHV activity to let additional vegetation grow back on the dunes themselves. She also pointed out that the wind fencing and hay bales haven’t been effective mitigations thus far.

“We hear a lot of platitudes about public health being a priority from State Parks, but actions speak louder than words, and there’s a critical shortage of effective actions here,” Versaw concluded.