Dust off your chickens

The Virginia Barter Theatre opened its doors in 1933 with an unorthodox arrangement; customers could pay 40 cents for their ticket, or the equivalent in produce. Many opted to go the latter route, exchanging hogs, chickens, eggs, milk, butter, and the occasional rattlesnake for comedy and drama. Accordingly, the theater company paid its use rights to playwrights in Virginia hams, except in the case of George Bernard Shaw who was a vegetarian and received his payment in spinach.  Seventy-six years later, audiences in San Luis Obispo will have the opportunity to watch the theater company perform Of Mice and Men at the PAC, on Oct. 25.

As if to emphasize the theater’s resilience, the town’s jail was located beneath Barter’s stage. The space eventually transitioned into a holding cell for dogs with rabies, and finally blossomed into dressing rooms. The Barter Theatre building, originally constructed in 1831 as a church, was eventually appropriated as the town fire hall equipped with a fire alarm on the roof that—until 1994—sounded at all hours of the day and night. When the alarm interrupted a show, actors paused and remained inactive until the alarms concluded and the show resumed.

“We are a theatre of curiosity. And endurance,” states the company’s website.

This is the third time the theater has staged Steinbeck’s first novella, which he wrote in a style that could both be performed as a play or read as a novel. They first mounted the production just over a decade ago, and returned to the production in the spring, citing the obvious economic and social parallels between Lennie and George’s Depression-era  reality and that faced by Americans today. 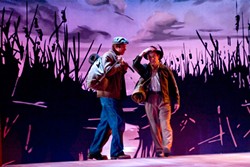 “The American dream seems to ebb and flow with these economic turns,” explained Director of Marketing Peter Yonka. “The journey for George and Lennie is still a journey that a lot of people go through, the desire to make something of their lives, to have something that’s meaningful to them.”

The Barter Theatre has an extensive history of touring, usually to such out-of-the-way venues as a coalmine where workers don’t have the luxury of seeing live theater. But in the past couple of decades they haven’t taken on any extensive tours. The decision to re-launch this tradition with a performance of Of Mice and Men through Steinbeck country was far from coincidental. The performance features a cast of 11 including a retired police dog named Rocky who takes on the role of Candy’s dog, a figure steeped in symbolism and foreshadowing. The Belgian Malinois is well traveled, having received his drug dog training in Europe before being shipped to the United States for work. John Hardy, the actor responsible for the character of George, performed the same role during the company’s first staging of the play more than a decade ago.

While the story is one that everyone has read—usually as mandatory study in high school—director Katy Brown encouraged the troupe to pull back from the tale’s inherent bleakness. Steinbeck was responsible for the tragedy, she reasoned. The characters, in spite of nearly insurmountable obstacles, are always reaching toward a better future. And that’s what Steinbeck’s tale is really about, according to Brown.

Brown’s goal was for the audience to possess “the sensation that this performance they might make it out, they might get their dream.” There are no surprise endings with a tale as classic and worn as Steinbeck’s but that shouldn’t stop an audience from rooting for George and Lennie and the small farm they one day hope to acquire.

The Barter Theatre operates two venues in repertory, meaning that at any given time the hardworking team is juggling four productions in various stages of completion. Work on Of Mice and Men began with rehearsals in late January, and had advanced to performances by the end of February, which wrapped up in April. They remounted the production for the tour in August. Because Brown was unable to travel with her cast, she did as much as she could to beef them up emotionally before their departure. Should any of the actors have questions or uncertainties about their character, Brown wanted them to be armed with a reserve of ideas.

As the play’s title indicates, the best laid plans can still go astray, a concept particularly relevant in times of economic uncertainty and fear. But, Steinbeck seems to console, we’re all in this great big mess together—Crooks, George, Lennie, Candy, Candy’s dog, Curley’s wife. And whether we collectively arrive at our own little farm to spend our lives tending rabbits or wind up with a bullet to the back of the head, there’s some comfort in that.