Construction workers in SLO County should wear respirators and special coveralls to reduce their risk of contracting valley fever on the job, the county Public Health Department is recommending after an outbreak of the potentially
fatal disease at a North County construction site. 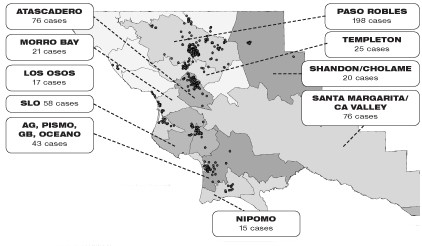 Half of the 14 workers at the site were diagnosed with valley fever, an “extraordinarily high incidence,” according to the department’s epidemiologist Ann McDowell. She gave a presentation about the disease to the SLO County Health Commission May 12.

Workers at the construction site contracted the illness after breathing dusty air kicked up during earthworks last fall. The dust contained spores of the soil-dwelling fungus known as coccidioides that can lodge in the lungs.

Public health officials are remaining tight-lipped about the exact location of the outbreak to protect the confidentiality of the workers, McDowell explained in an interview after the meeting. But the Health Department recently posted on its website a list of recommendations designed to limit exposure to the fungus, known as “cocci” (pronounced koksee). See www.slocounty.ca.gov/health/publichealth/commdisease.htm.

Health Commissioner Pam Heatherington called for the recommendations to be handed out by local planning departments when construction permits are issued, noting that there is little public awareness of the potential problem.

She also suggested that pipeline workers on the Nacimiento Water Project should be informed of the recommendations, since they are digging up soil that may be contaminated with the fungus.

“We know that San Luis Obispo County is an endemic area for cocci,” according to Public Health Officer Dr. Craig McMillan. “Construction workers have been found to be at increased risk of valley fever.”

While 60 percent of infected people show no symptoms, four in ten develop flu-like symptoms that can last a month. “Without proper treatment, valley fever can lead to severe pneumonia, meningitis, and death,” states an information sheet from state Department of Health Services.

“At highest risk for valley fever are farmers, construction workers, military personnel, archaeologists, and others who engage in activities that disturb the soil,” the sheet states.

Those most prone to serious illness include the elderly, pregnant women, people with weak immune systems, Asians, Filipinos, and African Americans. The disease can only be contracted through the air, not from person-to-person contact, according to health officials.

Controlling dust at construction sites is recommended, although McDowell said workers at the site of the North County outbreak had a problem obtaining enough water to wet the soil to reduce the amount of dust in the air.

Other recommended measures for employers include training workers about the symptoms, providing respirators for workers to wear near earth-moving machinery, prohibiting eating and smoking at the worksite, and avoiding construction operations during windy conditions. The county health officer also suggests limiting construction during the autumn to “essential jobs only,” since the risk of cocci infection is higher at that time.

To prevent the spores from being transported
to other areas, public health officials recommend that workers should be provided with coveralls daily, along with showering facilities and boot-washing stations.

McDowell pointed out that the recommendations don’t consider “people a quarter of a mile down the road” from construction sites, and called for more encouragement for firms to control dust.

“The fungus just lives in the soil here. There’s no way to get rid of it; it’s just here. If you’re in a dirty, dusty area in this county, you’re probably at risk. You could be exposed driving through a dusty area,” she told health commissioners.

During the public comment period, Eric Greening suggested that the health officer’s recommendations should be required as a condition of project approvals. He said he’s concerned about construction work now underway on Highway 41 in downtown Atascadero, adding, “I saw dust billowing up.”