Venice Beach’s Dust Bowl Revival revels in a delicious mix of contradictions. Like any hearty musical stew worth its salt, the band has only taken on more complexity and depth of flavor over time.

The ragtag group is both a “jazzy string band” and a “miniature orchestra,” both refreshingly youthful while simultaneously rooted at the heart of American music. It doesn’t really matter what you call Dustbowl Revival, just know you’re in for an uncommon cocktail of bluegrass, gospel, pre-war blues, and hot swing—although you’re bound to experience unexpected snippets and shards of other bygone reverberations, too.

Be warned: Live performances bubble over with tattered flair and uninhabited stage antics that inspire stockings to quiver and spats to tap of their own free will. The carnival wagon is set to roll into SLO Brew this Friday, Jan. 9 (7 p.m.; $12-$14; 21+), so don’t take my word for it.

Just why does this motley crew inspire wallflowers to swing onto the dance floor with abandon? It could be the booze. Or, it could be the mind-blowing instrumentation. This troupe boasts some of the best players this side of the Mississippi, so if intense noodling and sweaty strumming isn’t really your thing, quit reading now. May I recommend a soothing Songs of the Humpback Whale CD?

But seriously, folks—this group’s got gumption. What started as a small string band that meandered up and down the West Coast has matured to include fiddle, mandolin, trombone, clarinet, trumpet, ukulele, drums, tuba, organ, harmonica, washboard, and kazoo (hence, the  mini-orchestra reputation). Oh yeah and don't forget the standup bass crafted from a real-life canoe oar.

Would you expect anything less from a band that has been called so genuine, you can almost taste the PBR and port wine being passed around the front porch during the Great Depression on the bayou (LA Weekly, Best of 2013)?”

Naturally, the smashing show will open with SLO,s resident gypsy jazz troupe, The Tipsy Gypsies, who released their frenetic Kickstarter-funded album,  Little Victories in the summer of 2013 and have continued to bring their heathen, hot-blooded rhythms to venues near and far.

Worried about what to wear to this old fashioned affair? Don’t fret it, dollface. There is no dress code nor do you need to know how to dance the Jitter Bug. If you get into trouble at the door, remember, the password isn’t “bee’s knees.”

Catch Amp Live with Ill-Esha (7:30 p.m.; all ages; $13 presale or $15 at the door), and bring your dancing shoes and Sham Wows (to sop up the sweat that will soon be pouring off your face). This show is not for the weak of heart—or ankles. Get ready for breaks, house, 2 step, dance, electro, mashups, and drum ‘n bass all wrapped up in a dynamic modern soundscape brought to you by the female Vancouver, British Columbia-born artist, songwriter, producer, and DJ.

Being a woman in the male-dominated DJ world hasn’t shaken the artist, and her fierce energy resounds at live shows.

“I have to be better ‘cause people expect me to be worse,” Ill-esha has said, noting that she plans to lead workshops that inspire at-risk youth—young women especially, to pursue the technical arts.

I’ll shake it to that.

Get your mind in the gutter

The Central Coast is the land of farmer’s markets, friendly people, and a bluegrass band on every corner (I thank my lucky stars for this daily). The Guttersnipes—formed by local musicians Kenny Blackwell (mandolin), Doran Michael (guitar), Louie Ortega (guitar), and Ken Hustad (bass), will perform at the Red Barn Community Music Series in Los Osos this Saturday, Jan. 3 (5 p.m. potluck; 6 p.m. show; $15 at the door), showcasing a mix of pop, jazz, blues, and country, Tejano, Brazilian and Celtic sensibilities.

This performance is a mashup of local talent raised from Central Coast soil. Mandolinist and guitarist Kenny Blackwell has been a fixture in the West Coast bluegrass scene since 1978 and is known for his extensive studio work and his membership in the Laurel Canyon Ramblers, a legendary California bluegrass outfit. His background includes collaborations with the likes of Linda Ronstadt, Johnny Rivers and Neil Diamond, and his personal projects include The Mystery Trees, The HayDudes, Little Black Train, and The Demos.

Dorian Michael has been a working guitarist for four decades and, in that time, has played plenty of blues and folk, jazz, and rock and roll. The musician is inspired by a vast variety of experiences, from rockin’ smoky honky-tonks to wowing in theater orchestra pits. His solo “contemporary traditional” music reflects these eclectic interests.

Louie Ortega is known nationally and internationally for his unobtrusive guitar licks and the warm, smooth vocals behind such groups as the Sir Douglas Quintet and the Texas Tornados. Of course, the local star also stands on his own as a singer/songwriter/guitarist. 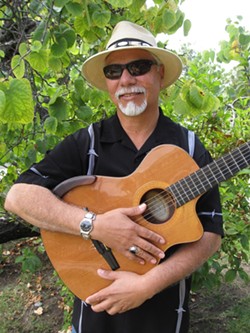 From 1989 to 1996, Ortega toured extensively throughout the U.S and abroad with the Texas Tornados, and his performance and translation of ”Soy de San Luis” on the group’s first album helped secure the band a Grammy in 1990. Ortega also performed with the newly revitalized Sir Douglas Quintet on Elektra Records and has also released two solo CDs, You & I and In My Heart.

If you want to hear some local heavyweights get down on the acoustic side of things, this show is not to be missed! And don’t forget to come early for some down-home potluck action.

Craving some spunky bluegrass sounds sprinkled with influences that harken back to the good old USA to the British Isles? Stringtown Ambassadors will bring their eclectic traveling minstrel show to a clutch of funky Central Coast venues in 2015.

Finally, with influences like the Magnetic Fields and Neutral Milk Hotel, there is no doubt that Los Angeles-based indie folk outfit Campfire Cassettes will blow your ever-loving mind at Linnaea’s this Wednesday, Jan. 7 (7 p.m.). Tune in and drop out with openers Todd N Todd and Simple Parade to round out the night.

Mouth trumpets for all!

OK. There’s “car geeks,” and “wine geeks,” and “original geek geeks,” so why not bestow the title of “harmony geek” onto those who just can’t get enough of a good vocal union? I am coining the phrase right now.

Voice Recognition (a.k.a. Anjalisa Aitken and Gary Garrett) is definitely that kind of geek, showcasing amazing improvised mouth trumpet as well as intertwined vocals that go above and beyond what you’d expect two humans to be able muster.

The duo will be featured at two Songwriters at Play showcases coming up Sunday, Jan. 4, with Miss Shevaughn & Yuma Wray at Sculpterra Winery (1-4 p.m.; no cover; all ages) and Thursday, Jan. 8 at The Shell Café in Pismo Beach (6:30 p.m.; no cover; all ages). Both shows will be also be opened by Craig Dingman of Code Blues. You have exactly two chances to catch this rather interesting lineup, so no excuses!

Back in the day…

And if you’re a fan of the witchy Miss Stevie Nicks, you might want to check out SLO area native Paul Vbarra’s new disc, featuring covers from Nicks’ music dating from1975 to 1979. Yes—this is the very first time a male artist has recorded her catalogue (as far as I can tell) and the unique EP is available on itunes now. The album is called, In the Stillness of Remembering and features hits like “Gold Dust Woman” and “Gypsy.”

We all know you didn’t really get what you wanted for Christmas. This one’s for you!

After much musical fun, Hayley Thomas will be back on regular Flavor duty this week. Send your music news and happenings to Glen Starkey at gstarkey@newtimesslo.com.