Ed. Note: This week’s two art stories come to us from the students of Cal Poly professor Eleanor Helms’ Philosophy 350 class, a course dedicated to aesthetics and the relationship between art and philosophy. Students were assigned to write a critical art review about a public art piece in San Luis Obispo. The following are a selection of some of the best from this past quarter. Enjoy!

Bubblegum Alley is special among SLO attractions in that one cannot deny that it has aesthetic value, but it is hard to see why. When describing the location to others, it is difficult to explain why exactly it is so interesting. Individual pieces of gum can be found everywhere, not the least of which in alleys. Yet there is something in the commitment, the sheer volume of gum in Bubblegum Alley that is hard not to appreciate. It is only by viewing the alley as a whole, both spatially and temporally, can one understand its appeal. For to do this is to see the alley in its proper context, and as it turns out, ourselves as well. 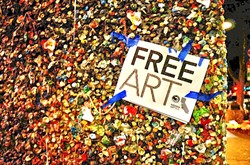 For Heidegger, the value of art comes in its ability to examine objects in their proper context. There is a certain “truthfulness” to art that cannot be captured by science or philosophy. Imagine the City Council put a sign up that read “this gum has been here for so-and-so.” Not only would such a sign be unnecessary, it would detract from the location by taking the observer away from the experience. History is built into the alley, the walls are made of the stuff. Especially important to the alley is one’s ability to contribute. The site isn’t “off limits” like you might expect from a traditional piece of art. By adding to it, you aren’t defacing it, you are contributing to its richness. In this sense, Bubblegum Alley might very well be the most authentic piece of art, as it allows you to place yourself within the piece in a way that traditional art cannot. One should also mention its location—off an ordinary street, not tucked away in a museum. Its location allows it to become a part of the lives of the denizens of SLO. One imagines for some that it has become entirely ready to hand; [it’s become] invisible. For the tourist, this is not the case. When visiting, the alley is very much present at hand; [it’s] removed from its context as an alley, instead [it’s viewed] as a destination.

Consider someone who happens to be chewing gum as they pass by the location. At first, the gum is ready to hand; chewing is an autonomous action. When passing by the wall, however, the gum becomes conspicuous in one’s mouth. By appreciating the alley, the context of the gum changes; it is no longer merely something to put in one’s mouth. Within the context of the alley, the gum is no longer merely a piece of gum the same way a bridge is not merely a bridge in the context of its location.

Now, perhaps, this person decides to place their gum on the wall and step back. Once again, the gum becomes invisible to perception, lost among the sea of its bygone siblings. This may invoke a feeling of the mathematical sublime. Important to the aesthetic appreciation of the location is both the gum and the alley. This may seem trivial, but consider Kant’s pyramid. When viewed too closely, it becomes difficult to comprehend the pyramid as a collection of layers, only being able to view each stone individually. However, when viewed too far away, it is impossible to appreciate the pyramid as a collection of stones. In the same way, when viewing the gum individually, one cannot perceive the alley; when viewing the alley merely geographically, one cannot perceive the gum.

However, our perception of Bubblegum Alley extends not merely in space but in time as well. Bubblegum Alley is interesting in that it is perpetually incomplete. Each piece of gum added to it enhances it, but does not finish it. We often view art as being static, fixed to the present. Yet to fully appreciate Bubblegum Alley means to recognize its being in the past and the future. Consider what it means to contribute to the alley. All blank space along the walls has long been filled (except perhaps the highest reaches, but even that has begun to be explored). One must consciously place one’s gum on top of someone else’s. This act not only acknowledges the existence of those who have been there before you, but the understanding that one day someone will place their gum over yours.

Consider Heidegger’s notion of dwelling. Dwelling seems to be the ultimate act of authenticity. It is an acceptance of our world and our place in it, of our life and our death. This is encapsulated by the fourfold—earth, sky, divinities, and mortals. Even common objects such as bridges may gather the fourfold. The alley, too, is able to gather the fourfold. The alley as a whole represents eternity, the appearance may change but the location remains the same. The gum is mortality; it is placed on the backs of its blackened brethren, a fate that awaits itself one day. Then, gum will be placed on it, and so on, such as generations come and go. Could there be a more poignant affirmation of one’s mortality? In this sense, I think it is entirely possible to achieve dwelling in the alley, just as your gum dwells within the alley. But what of the local for whom the alley is just another path to traverse? They can experience the fourfold perhaps better than any tourist. Every day, the wall changes its composition for them. Every day, it has a new story to tell. While the tourist can only intuit the alley as a piece of living geometry, the local gets to experience it. In this way, the alley and its gum becomes a part of the local’s dwelling, an old friend that will live and die with them.