An E. coli outbreak present in romaine lettuce that has caused 59 reported cases of illness and 23 hospitalizations in 15 states was linked back to Adam Brothers Farming Inc. 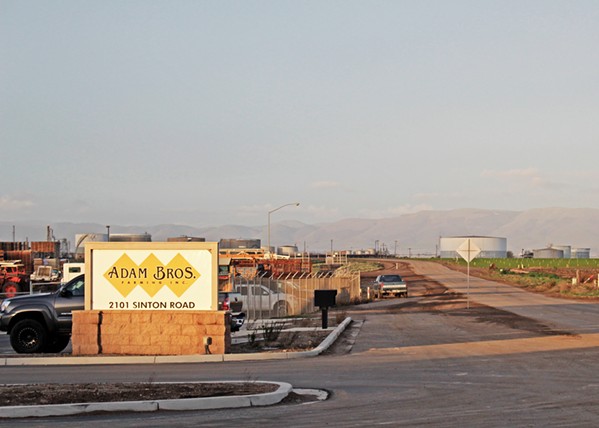 The Santa Maria farm is voluntarily recalling all red and green leaf lettuce and cauliflower that was harvested from Nov. 27 to 30 in cooperation with a U.S. Food and Drug Administration (FDA) investigation into the outbreak, according to an Adam Brothers press release from Dec. 13.

The recall was initiated after sediment from a reservoir near Adam Brothers produce tested positive for E. coli O157:H7, the same strain that was first reported to be present in romaine lettuce in early October, and has since impacted scores of individuals in multiple states. Adam Brothers stated in the release that while filtered and treated water from the reservoir may have come in contact with the farm's produce after it was harvested, none of the filtered water has tested positive for E. coli.

"Adam Bros. Farming Inc. feels a strong commitment to its customers and has worked for years to provide a safe and healthy food supply," the release read.

Adam Brothers Farming, which is run by Santa Barbara County 4th District Supervisor Peter Adam and his brothers Dominic and Kieran, did not respond to a request for comment. Officials of Supervisor Adam's office declined to comment and directed all requests for information about the E. coli outbreak to the farm's employees.

Adam Brothers Farming was one of eight farms identified by the Centers for Disease Control and Prevention (CDC) and the FDA in a trace-back investigation. While the strain of E. coli found in the Adam Brothers' reservoir was found to be closely related genetically to the strain discovered in ill people, it is likely that other farms have also contributed to the outbreak. The CDC is recommending that people avoid buying, serving, selling, or eating romaine lettuce from Monterey, San Benito, and Santa Barbara counties. Lettuce from San Luis Obispo County does not appear to be involved in the outbreak, according to the FDA.

Peter Cassell, a spokesperson for the FDA, said in an email to New Times that the organization is still investigating how the E. coli outbreak started and spread. Data collected by the CDC shows that roughly 46 percent of infected individuals were hospitalized, and two developed more serious kidney complications. No deaths have been reported so far.

More information will be released as it becomes available. Δ