E Pluribus Unum: From Many, One exhibit explores the immigrant's story at Studios on the Park

While the list of hot-button topics bound to start WWIII at your family dinner table are ever changing in the current political landscape, on any given day the wall President Donald Trump promised to build along the southern border is easily in the top three.

Well, hold on to that fork. Whether you’re on the “#fuckingwall” (you can thank the former president of Mexico for that one) or “#MAGA” (you know who to thank for that one) side of things—Studios on the Park is going there. 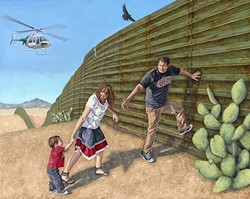 In a painting hanging at the gallery, a helicopter looms menacingly close to the ground as a man reaches a hand for his wife and young son, leading them to an industrial wall along the Mexico/U.S. border. That piece by artist Eric Almanza is part of the exhibit E Pluribus Unum: From Many, One currently on display at the Paso Robles gallery. The show aims to address the narrative of America as a nation of immigrants through the lens of Latino artists.

Henry Ramos, the curator for the show, lives in Santa Margarita and is a third generation Mexican American. He said the goal of the exhibit is to engage the community in a more nuanced dialogue about immigration.

“When we hear politicians talk about immigrants, it diverges from my experience significantly,” Henry said. “We are all immigrants, and that’s what makes our country great.”

Aside from Almanza’s depiction of a future wall, the works of about 14 other artists with Mexican and South American roots round out the show. A black and white photo of an immigrant farmworker’s hands by some freshly picked strawberries is affixed to a crate used for harvesting produce in artist Antonio Arredondo Juarez’s mixed-media piece La Fuerza de Resiliencia. In Trespassers by Natalia Anciso, a piece using embroidery and watercolor shows gorgeous bright flowers juxtaposed with a woman and two young boys in black and white hiding among the petals. 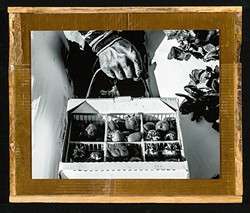 But E Pluribus Unum: From Many, One is more than just a passive art-viewing experience. It invites members of the community to step into the Latino culture through a series of events in June, including an interactive art installation, a Mexican rap concert, an art talk and dinner at La Cosecha, a live performance by the local New Hope Youth Folkloric Group, and a theatrical reading of Cuentos de Josefina by Vermont-based playwright Gregory Ramos, who happens to be the brother of show curator Henry.

The play features five actors telling stories based on Ramos’ interviews with Mexican families on both sides of the border. The story is framed through a narrator telling stories of her grandmother Josefina, who along with her brother was orphaned as a child in Mexico and crossed the border to be with relatives in the U.S.

“It’s an homage to heritage and a valentine to the people who undertook the reality and hardship of immigration,” Gregory said.

Above all, Henry said he hopes the show creates a sense of our shared humanity.

“This is a show for all people,” Henry said. “It’s for people who love our community and want a better understanding of the immigrant community.”

Send thoughts on the #fuckingwall and tales of immigration to Ryah Cooley at rcooley@newtimesslo.com.