After receiving extensive comments on a draft environmental impact report (EIR) for the Eagle Ranch development in Atascadero, ranch owners Greg and Jeff Smith decided to hit the brakes on moving the project forward.

The Smiths informed the city of Atascadero recently that they're suspending the Eagle Ranch planning process for an indefinite period, requesting more time to evaluate "significant new information" that impacts the "feasibility" and "marketability" of the development.

"We're trying to assess what kinds of impacts this has on our budget [and] our schedule," said David Armstrong, CEO of Smith-Hobson, the Smiths' company.

Eagle Ranch's long-awaited EIR was published in February and generated substantial public response—including some staunch opposition. The nonprofit Atascadero Neighborhood Alliance recently formed in response to Eagle Ranch, and the group's attorney wrote a scathing critique of the EIR. 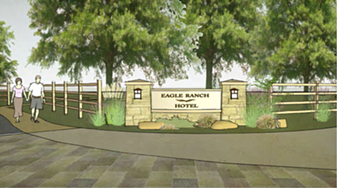 "There were more comments [on the EIR] than the city's consultants had anticipated," Armstrong said. "We're trying to understand how all this may play out and what the costs are going to be."

Proposed nearly two decades ago, the Eagle Ranch residential development would add 494 single-family lots and 93 multi-family units on 3,457 acres of property—to be annexed into the city. The project would also include a hotel and spa, and 2,285 acres of open space.

"When the fiscal impact analysis is complete, this will be released to the public," Dunsmore said in an email.