Ear candy: What you should have listened to in 2017, according to the staff at Boo Boo Records

I've been feeling like my repertoire of music needs a definitive update. And after the staff members at Boo Boo Records provided New Times with their Top 10 releases of 2017, I felt like I just needed to throw everything away and start over. But thankfully, Jan. 1 is almost here, and now I have some lists to help kick start my search for new tunes ... in 2018. 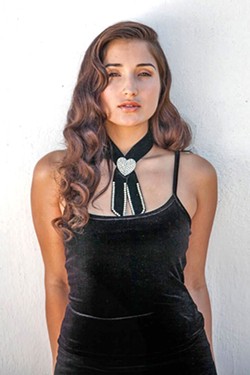 Guess what though? You probably are, too, unless you work at a record store. So, even though you won't admit it to yourself, I'm going to help you out.

Here's the down low on hip picks, in every genre imaginable but no particular order:

• Vijay Iyer Sextet: Far from over - "I saw this group at the Ojai Music Festival and they were amazing."

• Steve Winwood: Greatest Hits Live - "The songs span the length of his career."

• Ranky Tanky: Ranky Tanky - "Saw their performance at the Monterey Jazz Festival. I couldn't wait to get their CD."

• Jaco Pastorius: Truth, Liberty & Soul - "A never before released 1982 concert recording from the late genius of the bass."

• Mavis Staples: If All I Was Was Black - "Mavis keeps getting better with age."

• Stanton Moore: With You In Mind - "Outstanding tribute to Allen Toussaint."

• Don Bryant: Don't Give Up On Love - "A gem from this unknown veteran soul singer and writer."

• Cigarettes after Sex: Cigarettes After Sex - "Blissed out serenades. Simple yet seductive."

• Isaac Hayes: The Spirit of Memphis - "Record store day collection of the production muscle of our favorite chef."

• Thom Yorke: Tomorrow's Modern Boxes - "That falsetto and voice, and here it's warped and textured over electronic production."

• Jay-Z: 4:44 - "Slept on this until this month. A great bed of cut and paste soul provides the bed for a more personal examination."

Frank Hayes' metal masterpieces with other things, too

• War Cloud: War Cloud - "Modern technicians of a classic sound in the same vein as Pentagram, Black Sabbath, and UFO."

• Exhumed: Death Revenge - "It's the perfect soundtrack for any horror fan."

• Conan: Man is Myth - "It has been described as 'caveman battle doom.'"

• The Obsessed: Sacred - "A hard rock/metal masterpiece 20 years in the making."

• Slowdive: Slowdive - "A rare shoe-gaze treasure to take you back in time to when it was at the height of popularity."

• Iced Earth: Incorruptible - "It's epic, heavy, and full of dynamic flare that Iced Earth have always been known for."

• At the Drive-In: in•ter a•li•a - "It oozes raw, punctuated power that makes you want to challenge the world!"

• Slowdive: Slowdive - "Somehow this album is perfect for both a rainy day or a sunny beach cruise. How do they do it?!"

• Robert Turman: Veiling Reflections - "There are, without question, no rivals to his trance-inducing tape loop rhythms."

• Drew McDowell: Unnatural Channel -"The mastermind behind Time Machines and a key player in the experimental scene. This second solo effort really showcases his genius."

• Swans: The Great Annihilator/Drainland [reissue] - "One of my all-time favorite albums and the pinnacle of pre break-up Swans!"

• The Doors: The Doors & Strange Days [mono reissues] - "A breath of fresh air for these seminal albums. The mix sounds like you are the only audience member in a private show. Is everybody in?"

• Pink Floyd: 1965-1967 Cambridge Station - "While full of amazing and rare Barrett-era cuts, we finally see an official release, mix, and master of Scream Thy Last Scream and the fabled In The Beachwoods!"

• Jason Isbell and The 400 Unit: Nashville Sound - "Politically and emotionally charged alt-country from one of the most talented songwriters working today."

• Beck: Colors - "Such perfectly crafted pop with chops that get better with every listen."

• The Creston Line: Vagabonds -"Emotional roller coaster of an album that didn't leave my player for a month."

• Old '97s: Graveyard Whistling - "Check out the video for 'Good with God,' featuring Fred Armisen on drums, although unfortunately missing the haunting howl of Brandi Carlile as the voice of God."

• Thievery Corporation: The Temple of I & I - "Perfect rocksteady reggae rhythms featuring guest vocalists of the highest caliber."

• Machine Girl: Because I'm Young Arrogant And Hate Everything You Stand For - "38:46 of absolute chaos."

• Sleaford Mods: English Tapas -"I don't know how I got through life before I heard these guys."

• SQÜRL: EP - "Jim Jarmusch's band is way better than the last couple of movie's he's made."

• Ian Svenonius: Escape-ism - "'The sexiest boy alive' is back preaching the gospel with a new project. Must shake ass."

• Hüsker Dü: Savage Young Dü - "Another stellar release from the Numero Group that compiles all the early material from the band."

Editor Camillia Lanham knows you're waiting for Glen Starkey to come back, but still wants you to check the New Times' calendar for New Year's shows! Send comments to clanham@newtimesslo.com.