Earth and Oven serves up wood-fired pizza in Los Osos

Find Earth and Oven on Instagram @earthandoven to locate weekly pizza specials and for instructions on how to pick a time to place your order.

There's never a "good" time for a pandemic to hit. But for born-and-raised Los Osos resident and chef Kean McCabe, the timing was exceptionally vexing.

After 12 years of working his way up the culinary ladder, most recently at Ember Restaurant in Arroyo Grande, McCabe decided he wanted to work closer to his Los Osos home, where he lives with his fiancée and 2-year-old daughter. He had just accepted a new position at Morro Bay Oyster Company and put his notice in at Ember when stay-at-home orders hit and the world came to a halt. McCabe suddenly found himself without a job.

But after working on the line at Ember for the past four years, McCabe knew how to, "sling dough," as he calls it. Newly unemployed and looking for someone to feed, McCabe fired up his self-constructed pizza oven in his Baywood backyard.

"I started texting my friends and family in the Los Osos community saying, 'Hey, do you want pizza on Friday?'" McCabe recalls. "I sold probably about 20 pizzas the first week, so I thought, 'I should do this again.'"

The next week McCabe sold almost double that, and sales only went up from there. He started promoting his newfound business model on Instagram and gave it a name: Earth and Oven.

"I've been slinging pizzas every Friday and Saturday now for about six months," McCabe said. "Every week I do anywhere from 100 to 120 pizzas in two days."

McCabe has it down to a science: every Monday he posts his weekly pizza menu through a booking site linked on Earth and Oven's Instagram bio (@earthandoven). After choosing a Friday or Saturday pickup time slot, customers can order up to four pizzas from the five weekly options.

Earth and Oven's staples include classics like four-cheese and pepperoni, but McCabe also switches things up with a new special pizza each week.

I knew I had to go with the latter option the moment I saw the topping list: smoked salmon, dill-infused cream cheese, confit garden tomatoes, red onion, fried capers, and finger limes from Shanley Farms in Morro Bay. I'm a vegetarian, but I made an exception just for this pizza because ... how could I not?

I rolled up to McCabe's home in my Prius a couple of minutes before my time slot. As soon as the clock on my dashboard struck 7 p.m., a woman wearing a face mask came outside carrying a 10-inch pizza box, and through my car window instructed me on how to use finger limes (an absolute revelation). It took everything in me not to scarf down the pizza right then and there.

After a torturous 15-minute drive home with the scent of smoked salmon wafting around my car, I consumed what's easily the best pizza I've ever had. I'm talking better-than-Italy good.

McCabe recommends enjoying his wood-fired pizzas with a side of Los Osos scenery.

"My idea behind it was, during quarantine, you can come out to a spot that you might not normally come to in Montaña de Oro or Baywood Park," McCabe said. "It's my way of helping get the community members out of their norm."

In addition to his weekly pizza hustle, McCabe offers private dinners with elaborate menus that he orchestrates himself. Want to dine on Morro Bay Pacific Gold oysters, butter lettuce with yogurt dill dressing, cast-iron filet mignon, and orange zest crème brûlée to finish it off? Shoot McCabe a direct message on Instagram to see when his next available reservation is and what's on the menu.

"I'm giving people the ability to have a private chef come into their house and cater a meal, or to come to my location and get a fine dining experience like you would at a restaurant," he said. "It's your party." 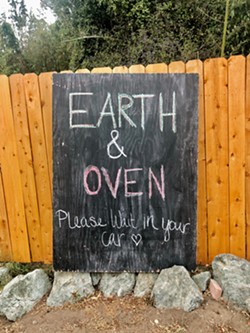 McCabe said he's always dreamed of opening a brick-and-mortar establishment, and it's something he thinks about for the future. But the pandemic brought a new opportunity for him to do what he loves from home, something he said he might have never tried if it weren't for restaurants closing down in March.

"I'm just trying to get caught up and figure out what's the next step," McCabe said. "I've been looking at getting more mobile and all that, but I don't want to take away from what I have going. It's a really good thing, but I'm at a max with how many people I can serve out of this oven."

For now, he's taking it week by week and enjoying the unexpected ride.

"It's given me the ability to push and launch and do something for myself that I've almost always wanted to do," he said. "2020's been the biggest surprise for everybody. I feel humbled and blessed that people want to support small and local, especially right now." Δ