Livin' and learnin' at Earth Day

As I’m riding the trolley to El Chorro Regional Park on Sunday, April 22, I can’t help but overhear two little girls talking behind me.

“Oil is precious,” says one.

“Water is precious,” says the other.

“So is oil,” repeats the first.

“You should keep oil in the ground,” counters the other.

The first person I see when I get off the trolley is Vincent from Dynamic Electric Vehicles, the little shop on Broad and Branch in SLO. He takes care of my eGO electric scooter, and he’s got three new electric vehicles he's showing off to the Earth Day throngs.

Then I see Briana Shean and her little bunny Bartholomew. She’s trying to get folks excited about the Central Coast Hour Exchange, which she says is “a way to use the stuff we do to get us the stuff we want.” 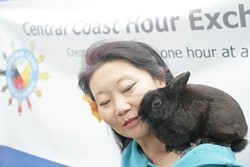 While our local chapter is just a couple months old, the Hour Exchange has been around for a long time. Members book hours and withdraw hours. You need someone to do flooring, someone else needs a plumber, another person needs a writer, another a massage therapist, and so on. Everyone’s hours are worth the same. For example, you massage for an hour; you withdraw an hour of plumbing.

“Unlike barter, where you need to find someone who needs what you do and you need what they do, and you’re often unhappy with the imbalance of the exchange, the hour exchange lets you bank hours and withdraw what you need,” explains Briana.

The local chapter has about 60 members and is growing, and you can learn more about it at CCHE.timebanks.org.

I continue to wander and soon run into Dan Melton of SLO Veg, the fresh produce delivery service that brings local produce right to your door.

“I was juicing, but I haven’t lately,” I admit. “It’s hard to keep produce around.”

“Well, you could sign up for a small, medium, or large, and have it delivered weekly, every other week, whatever,” he says.

I decide on the spot to try it—a small delivery every other week to see how it goes. Dan’s got nearly 700 happy clients. Sign up at sloveg.com.

I stop by the Central Coast chapter of the Bioneers booth and learn a bit about their local conference to be held Oct. 18 to 21 at SLO’s Monday Club. They’re currently accepting workshop proposals for the conference, and submission forms are available on their website at centralcoastbioneers.org.

Hmm. Someone seems to be cooking turkey sausage on a big solar oven. Cool! And there’s Sammy the Steelhead Trout! And there’s a tower garden. Awesome! 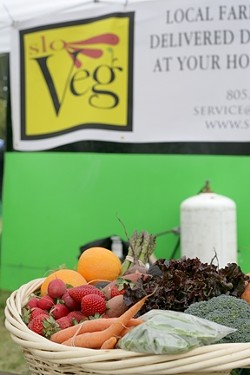 And there’s the Move to Amend booth, where volunteers are trying to get folks to sign a petition for a constitutional amendment “to unequivocally state that inalienable rights belong to human beings only, and that money is not a form of protected free speech under the First Amendment and can be regulated in political campaigns.” Sorry, Mitt, but corporations aren’t people, and corporations trying to control elections through Super PACs is not free speech. I sign it, natch! (Learn more or sign the petition at movetoamend.org/ca-san-luis-obispo.)

Hey, I see a green cape in the distance, and sure enough, it belongs to Cal Poly student Brett “Mr. Eco” Edwards, who tells me he’s going on stage in about 30 minutes to deliver a set of his environmental rap songs such as “The Prince of Fresh Air.” SLO’s environmental rap superhero is a big hit with the kids, with his green and gold outfit and electric hero vehicle. He’s handing out cards that list his favorite food (local), water (tap), and wrapper (None! Wrapping’s a waste of paper!). Learn more at mrecomusic.com.

Finally, I finish my Earth Day visit with a spin around the SLO Botanical Garden (slobg.org), where I see a bunch of plants I’ve never seen before! Wow, Earth, I hardly know thee! I do have to agree with the little girl, too, that you should keep your oil in the ground, but even a trolley needs to run on something.