Three days into the testimony stage of the federal trial of Charles Lynch, the Arroyo Grande man sat straight-faced, wearing a grey suit, pressed white shirt, and green tie, flanked on each side by a public defender. 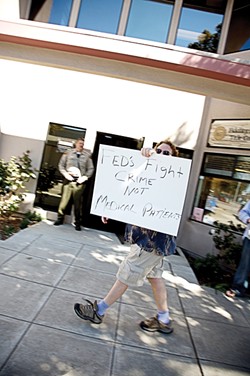 The trial of Lynch, who operated a medical marijuana dispensary in Morro Bay until it was raided last year at the request of Sheriff Patrick Hedges, is being closely watched as a test of the conflict between state and federal drug laws.

Lynch’s choice to have a jury trial, rather than plea bargain, is extremely rare in federal cases involving medical marijuana dispensaries, and it’s a big gamble as his five charges would carry a sentence of between five and 20 years in prison.

Testimony began with several local sheriffs’ detectives, who had worked on a yearlong stakeout of the dispensary, taking the stand. Their surveillance eventually led to a federal raid on the business and Lynch’s home.

The third day of testimony, July 29, was dominated by Rachel Burkdoll, a Drug Enforcement Administration agent whose role in the raid was paramount.

Lynch has been charged with crimes related to selling marijuana, selling to minors under 21 years of age, and operating a drug business. Whether or not Lynch was operating within California law, which allows dispensaries to grow and sell marijuana to medical patients, will not be considered during the federal case. In fact, Lynch’s attorneys have been told by the judge they can’t mention the words “medical marijuana,” although it appeared that jurors were getting the idea anyway.

When agent Burkdoll, a petite blonde in her mid-twenties, was sworn in, she explained in painstaking detail the types of documents that were seized during the raid. They included patient files, which identified patients by number and showed each patient’s full name, as well as a photo taken at the dispensary and copies of their California driver’s license. Also within those records, although it was not shown as evidence, was a physician’s statement, which explained the reason the patient was seeking medical marijuana.

Several employee files were shown throughout the day, including photos and Social Security cards, and for many employees, particularly the ones younger than 21 during their employment at Lynch’s Central Coast Compassionate Caregivers, records of sales were shown to the jury, indicating that these employees were also patients.

Lynch’s attorney, John Littrell, objected to each instance when the prosecution showed the medical records, citing patient privacy rights under federal HIPAA statutes. Lynch’s own records—he’s identified as “patient number one”—were an exception to the objections. Despite repeated obections to the use of patient records, Judge George Wu allowed it.

Without using the words “medical” or “dispensary,” prosecutors called Lynch’s operation a marijuana store, and used business records to show how much marijuana was sold during the course of a year. The records show exactly who sold what, to whom, and when.

Just before noon that day, the ground heaved and sent the courthouse—17 floors of courts and offices in magnificent Art-Deco style—swaying on its 70-year-old foundation. News of the quake, of 5.4 magnitude, dominated talk radio and TV news throughout Wednesday morning when people were still asking other people where they had been during the tremor.

Judge Wu broke for lunch early because of the disturbance, and outside the courtroom Lynch spoke with his supporters, who opined that it must be a sign. Surely, they said, the people of the United States of America would be shaken to their senses, and awakened to the injustice of criminalizing medical marijuana dispensers.

Lynch’s supporters numbered between 10 and 15. After lunch, the prosecution worked to show that Lynch had often sold marijuana to minors, a crime that carries an additional sentence enhancement.

Prosecutors presented the photo IDs of several men under the age of 21, and a five-page list of patients who were underage by federal standards. In all, about 10 percent of Lynch’s more than 2,000 patents were between the ages of 18 and 21. With the list in hand, Burkdoll said she looked for the minors’ names in the dispensary’s sign-in sheet, to prove that they had bought marijuana there. Later prosecutors showed security footage of the underage men buying marijuana. According to Burkdoll, the footage was compiled by a detective from the San Luis Obispo County Sheriff’s Department.

Owen Beck, who is possibly Lynch’s best known and most controversial patient, took the stand next, though only briefly. Beck was featured earlier this year in an episode on Drew Carey’s Web site, www.reason.tv, which explored the case against Lynch. Beck, who lost a leg to bone cancer, approached the stand on crutches, one leg of his slacks neatly pinned-up. Beck was only 17 years old when he obtained a marijuana prescription from his oncologist at Stanford University, and subsequently made Charles Lynch’s acquaintance.

Although Beck never bought marijuana himself—his parents had to purchase it—he was supposed to testify to Lynch’s character, and his law-abiding nature, based on the rigid rules concerned with the dispensary.

But Beck spoke for less than five minutes, mostly answering yes and no questions. When asked how he knew Lynch, Beck began by explaining his cancer, and his doctor’s recommendation that he seek medical marijuana. That was it; the jury was ordered out, and a debate ensued as to who would be a character witness, and whether abiding by California law matters in federal court. In this context, the judge ruled, it doesn’t. If Lynch was selling marijuana within the parameters of Proposition 215—the medical marijuana law—then he was clearly in violation of federal law. Lynch’s attorneys acted surprised, and protested that many of their character witnesses would be thrown out.

Beck was eventually asked to step down from the stand. His testimony was considered null and jurors were instructed to strike it from their memory.

In coming days, Lynch’s attorneys will have other battles to fight, including making an argument—described in opening statements—that Lynch had contacted the DEA before he ever opened his dispensary. His attorneys argue that if Lynch cleared his plans with the DEA, his subsequent arrest amounts to entrapment.

Lynch himself took take the stand July 30. The trial is expected to conclude in early August.