Teachers, staff, and students at SLO High School had a chaotic morning on Feb. 28 when what was supposed to be a standard earthquake drill turned into a lockdown that students thought was a real emergency. 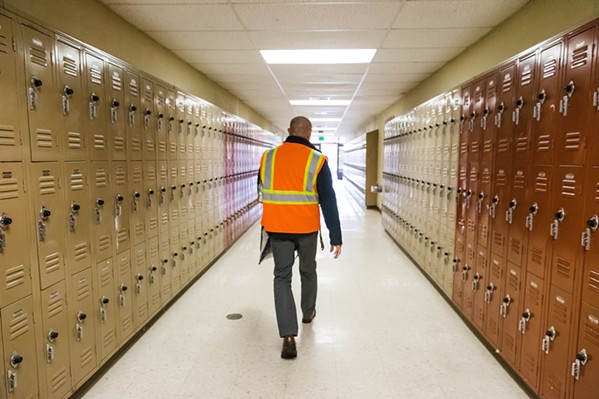 In an email sent to SLO High School families at about 9 a.m. on Feb. 28, administrators informed parents and guardians that an earthquake drill that had been scheduled for first period that morning had gone awry. The school's intercom system has a series of preset emergency announcements, according to the email, and instead of pressing the earthquake drill button, an employee accidentally hit the emergency lockdown preset.

It was a simple human error that caused some confusion, according to SLO High School Principal Leslie O'Connor, but he said the mistake was corrected and all teachers, parents, and students were informed of the mishap within the hour.

And on the bright side, O'Connor told New Times, "Students were well-trained."

Students and teachers at the school reacted appropriately to the faux lockdown, with individuals indoors hunkering down in their classrooms, and those outside moving away from campus as trained.

O'Connor said that while the school is working to ensure this kind of error doesn't occur again in the future, accidents do happen.

But one SLO High School student wants more than just a promise to try harder.

The student, who requested to remain anonymous for privacy reasons, was in first period when the lockdown announcement rang out over the intercom. At first, the student said she and her classmates didn't believe the lockdown was real. But when her teacher told the students to hide under their desks, everyone started to panic.

"Some students fled from the buildings because they were afraid for their lives," the student wrote in an email to New Times, "and others became so panicked that they couldn't move."

Then when another announcement was made telling students and teachers to go outside in preparation for an earthquake drill, the student said everyone pretty much assumed the lockdown had been an accident, "since if there was a shooter on campus, they probably wouldn't call an earthquake drill."

Things calmed down after that, but the student said she felt anxious for the rest of first period, and some other students had trouble focusing for the rest of the day. Something should be done to make sure that an accident like this isn't so easy to make, she said.

"Is it OK for a lockdown drill to not be called a drill if the impact on students is so severe?" the student wrote to New Times.

Emergency drills and their psychological impacts on students have been at the center of a national debate over how to keep kids prepared for school shooting incidents in ways that won't cause increased anxiety around the issue.

It's not always easy for schools to balance both, according to Josh Peters, a SLO County Behavioral Health program supervisor in the Prevention and Outreach Division, which in part provides counseling services to kids on school grounds.

Whenever there's a widely publicized school shooting, Peters said, "the level of anxiety definitely goes up on campuses among all the students and staff."

Those emotions are especially difficult to navigate for students who have already suffered some kind of trauma, and Peters said active shooter and emergency drills can trigger an intense emotional response. That's especially true in situations where students aren't aware that a drill is fake.

Once triggered, it can take students a long time to calm down and focus again in the classroom. So Peters said it's always best practice to let students know when a drill is happening, which he said local schools typically do.

"I do believe that schools do a good job of being trauma informed and notifying students," Peters told New Times. "I think it is a rare occurrence when something kind of goes sideways." Δ