On a recent sunny August afternoon in Atascadero, the Carlton Hotel lobby sat silent and empty, save for one lone concierge. The former gift shop where North County developer and owner David Weyrich has set up an office space—where he usually works on weekdays—was dark, with bottles of Fiji water and various papers scattered atop a sleek wooden desk. 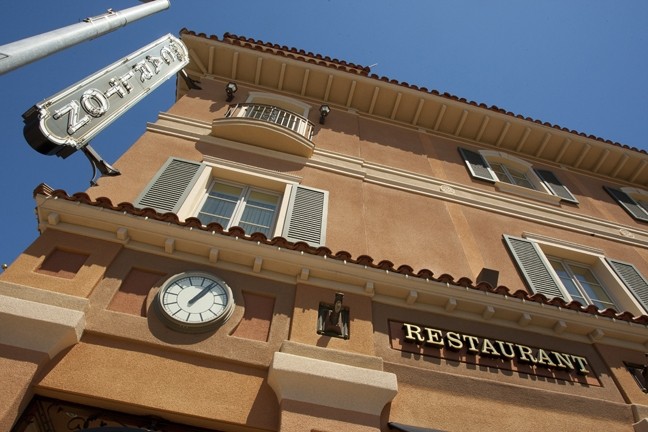 Asked about a vacant restaurant space, the clerk answered simply, “We don’t have a restaurant anymore. We don’t know what’s going to happen with it.”

The restaurant, Shockley’s, below the once-prominent hotel in the city’s historic Colony District, closed its doors when the owners decided not to renew their lease after just one year of operation, citing a fallout with Weyrich.

Now Weyrich and the city are looking to fill an empty space again, perhaps with a pot of taxpayer collateral as an incentive. Despite Weyrich’s history of financial troubles, whatever business decides to take over the spot could get a helping hand from the city in the form of restaurant stimulus loans.

“The city has said they would like to help get somebody in here, but right now money’s tied up in paperwork,” Weyrich told New Times.

The state Legislature has plans to disband city redevelopment agencies, and much of the money for similar projects is up in the air.

On July 28, following the “sudden and unexpected announcement” that Shockley’s was closing its doors, the city issued a press release to reassure residents that Weyrich is working with the city’s Office of Economic Development and the local Chamber of Commerce on an action plan to fill the “key food service anchor space.”

Shockley’s co-owners John Shockley and Kimberly Ness could not be reached for comment as of press time, but according to the city’s press release, Shockley cited “differences with the owner of the property” as the reason for not renewing the lease.

“But I saw it coming,” Weyrich said, adding that Shockley told him of his intentions in June.

Talks are already underway with another local restaurateur to possibly fill the vacancy. Jack Dorris, owner of Colby Jack Café in Atascadero, confirmed to New Times that he’s in early negotiations with Weyrich and the city.

Originally built in 1929, the 52-room historic property has been touted by the city as a “cornerstone” to downtown revitalization efforts.

Weyrich, along with two former partners, bought the hotel in 1999, and the business reopened its doors under the new ownership in January 2005. The first restaurant after the reopening, the Carlton Restaurant and Grill, was run by Weyrich until February 2010, when it was closed because of state tax problems.

Money woes continue to dog the hotel as well. According to the latest records from the county tax collector, Carlton Hotel Investments, LLC, owes more than $730,000 in back taxes, a figure that includes approximately $139,160 in interest and penalties.

After defaulting on an approximately $23 million loan for a package of several of his properties, Weyrich reached a forbearance with Lafayette-based real estate investment firm R.E. Loans. The agreement allows both parties to postpone a foreclosure on the hotel while renegotiating payment terms.

R.E. Loans, it turns out, is having problems of its own. On May 12, one of R.E. Loans’ managing members, Walter Ng, filed for bankruptcy. Furthermore, several investors have filed a class action complaint against Ng alleging they were scammed, according to court documents. The FBI has also opened an investigation.

While Weyrich struggles to keep the hotel afloat, mounting debt has forced him to go into foreclosure on a number of his other properties, including the posh Villa Toscana bed-and-breakfast in Paso Robles.

But he remains optimistic, he said, adding that the past three months’ sales have been the Carlton’s best in more than three years.

And that should make city officials very happy. Filling the hotel’s restaurant is among a list of top priorities for the city’s downtown revitalization efforts. On July 12, the Atascadero City Council accepted a “Strategic Planning 2011 Update on Council Goals,” which include retaining and expanding local businesses, attracting new people to the community, and spending “time on good investments.”

City officials have publicly stated that stimulus money may be available to help encourage a viable, long-term business to move into the Carlton space. According to Jim Lewis, president of the city’s Office of Economic Development, the stimulus consists of guaranteeing a portion of a commercial loan of up to $500,000 for new or expanding businesses. Loan amounts depend on a variety of factors, including the number of jobs that might be created, the size of restaurant, and how much tax revenue might be generated.

But the governor and the Legislature’s push to dismantle city redevelopment agencies across the state by October could scuttle that possibility. Such agencies use portions of property taxes to invest in special revitalization and economic stimulus projects. Changes at the state level would require those funds go toward schools and other projects.

Atascadero currently has a list of approved projects that depend on redevelopment money. On Aug. 25, the City Council ordered staff to come up with alternative funding options for the projects by Sept. 13.

“The problem right now is that we don’t know what’s going on with redevelopment projects,” Lewis said. “This all maybe moot.”

Lewis said that even if a stimulus loan could be dealt for a new Carlton restaurant, that assistance would go directly to the restaurant owner, not to Weyrich. He added that there has been no direct correspondence between the city and Weyrich regarding the space.

Staff Writer Matt Fountain can be reached at mfountain@newtimeslo.com.