Eats, shoots, and leaves: The fight continues against the Asian citrus psyllid

The Asian citrus psyllid is a persistent little bugger.

The tiny psyllid, which is creeping up California, can transmit Huanglongbing, or citrus greening disease, which is deadly to citrus trees. Huanglongbing has already ravished the Florida citrus industry, causing nearly $3 billion in damage, and has also been found in Mexico and in states across the southern U.S. 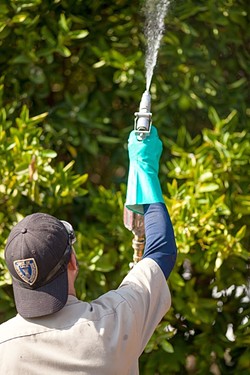 Since first discovered in San Luis Obispo County a year and a half ago, officials with the SLO Agriculture Commissioner/Sealer’s office and the California Department of Food and Agriculture (CDFA) have been abuzz with efforts to monitor the psyllid’s movements and respond with necessary action. The goal is to contain the Asian citrus psyllid faster than it can spread the disease, which thus far has only been found in Los Angeles County.

“We hope that we can keep populations knocked back and eradicated on the local level,” said Victoria Hornbaker, the citrus program manager for CDFA who oversees the state’s psyllid program.

A CDFA spray team spent Aug. 31 and Sept. 1 responding to the most recent detection, or “find,” in Nipomo. For each find, the team canvases the surrounding neighborhood to treat as many citrus trees as possible within an 800-meter radius. First, they drench the root zone with the insecticide imidacloprid, using a metal wand that resembles a garden hose. Next, the team sprays the leaves with cyfluthrin, slowly working in a circle around the tree to cover the foliage. Both insecticides are considered common household chemicals.

The CDFA’s pest detection and emergency projects division works with the property owner to get permission and then instructs them how to prepare their property for treatment. Bob Luna, who runs the spray team, said that SLO County residents have been very cooperative thus far. Every once in a while a resident raises a concern, often because they say they have a chemical sensitivity, but the issue is often resolved after some education and discussion.

Generally speaking, however, the residents recognize the need for the treatment. Hornbaker says that she’s seen more than a 95 percent cooperation level from residents. That cooperation comes in part, she says, because SLO County is an agricultural county, so local residents have a strong interest in protecting both their neighborhood citrus trees, and the area’s industry—last year, lemons brought in $15.9 million, and Valencia oranges reaped $1.7 million for SLO County.

“[The county] may not have hundreds of thousands of acres of citrus there, but people there do want to protect what citrus they have,” Hornbaker said.

Hornbaker is well aware of how Californians love their citrus—she grew up in Orange County, which got its name from the orange groves that once covered the horizon. Some of those trees still live in residential yards, standing as 100 year-old relics from times past.

“We’re fighting to protect that,” she said.

So far, all finds in the county have been in residential areas.

The psyllid first showed up on an Arroyo Grande lemon tree in March 2014. Since then, there have been 17 total detections in SLO County, including seven finds in San Luis Obispo, one in Cayucos, three in Arroyo Grande, and most recently, six in Nipomo, five of which were at the same detection site.

Each additional find means a stronger foothold for the psyllid network. After each psyllid appearance, quarantines are put in place. Within a 5-mile radius around the site, certain activities are prohibited, including the movement of citrus trees. Public outreach targets residents and landscaping companies to limit how far leaves and branches go after trimming.

The quarantine around the most recent Nipomo find connected to already existing quarantines, and CDFA now has a contiguous quarantine in place that stretches from Cayucos all the way to Mexico.

As eradication work continues throughout California, nerves of regulators and those in the industry are on edge because of several Huanglongbing (HLB) discoveries in San Gabriel this summer.

Up to 10 trees on eight residential properties tested positive for HLB. The last time the disease was found was the first instance of citrus greening in California. It was 2012 in Hacienda Heights—northwest of San Gabriel, also in LA County.

While Huanglongbing exists in Mexico 500 to 600 miles away from the California border, the disease infecting the Hacienda Heights tree is believed to be human transported via an infected pomelo (similar to a grapefruit) branch that was grafted onto a lemon tree.

While the disease has only been positively identified a few miles from its origin, it may only be a matter of time for the rest of California.

“[San Gabriel] is not that far away from where you are,” said Dr. Beth Grafton-Cardwell, entomologist at UC Riverside and director of the university’s Lindcove Research Extension Center, which specializes in citrus. “It’s going to start spreading in LA in the near future.”

Because of the frequency with which the psyllid reproduces and how Hunaglongbing takes effect—slowly moving from the leaves to the rest of the tree—the disease can be elusive and difficult to detect.

“They have this extremely efficient method of moving the disease, but we can’t tell that tree is diseased for about nine months,” Grafton-Cardwell said.

What’s more, the disease can at times have a long latency period, which means it can already be spreading but hasn’t yet shown itself.

“It could be more prevalent than we know,” said Martin Settevendemie, SLO County’s agricultural commissioner/sealer. “That’s the difficult part of this disease.”

Ag officials believe the psyllid didn’t fly up to SLO County but, instead, it had human help. That’s why Hornbaker underscores the importance of buying trees from a local nursery.

“Buy your fruit trees locally from a certified nursery; don’t go and buy it from somewhere else inside or outside of California, because that’s where we get the infections of HLB,” Hornbaker said.

If HLB does keep spreading, it could leave a large mark.

“This disease has the potential to change the landscape of California,” Grafton-Cardwell said. “If 60 percent of Californians have a tree in their yard, and this disease starts to wipe those trees out, you can see how that would change what California would look like.”

Staff Writer Jono Kinkade will be keeping an eye on the orange tree outside the New Times’ office. Contact him at jkinkade@newtimesslo.com.