Ebony offers the Central Coast a taste of Ethiopia

For current business hours, menu items, and prices, contact Ebony via Instagram @ebony_slo or email ebonysloca@gmail.com. Pick up orders at Ebony's new location at The Kitchen Terminal at 4750 Allene Way, in SLO.

At The Kitchen Terminal in San Luis Obispo, new eatery Ebony specializes in vegan cuisine from Ethiopia—home to teff, the world's tiniest grain, as well as gebeta, history's oldest board game.

In celebration of Ethiopian Christmas on Friday, Jan. 7, Ebony will be surprising randomly selected customers with one of two authentic, handcrafted gebeta games — also called mancala — as part of an Instagram giveaway. (Editor's note: this article was updated to include changes made to the giveaway after its publication.)

Initially launched in December from Benny's Kitchen in SLO, Ebony is the Central Coast's only Ethiopian restaurant. Customers are invited to place their to-go orders via Instagram, currently the restaurant's sole marketing channel, and pick up meals at its new expanded kitchen space off Allene Way. 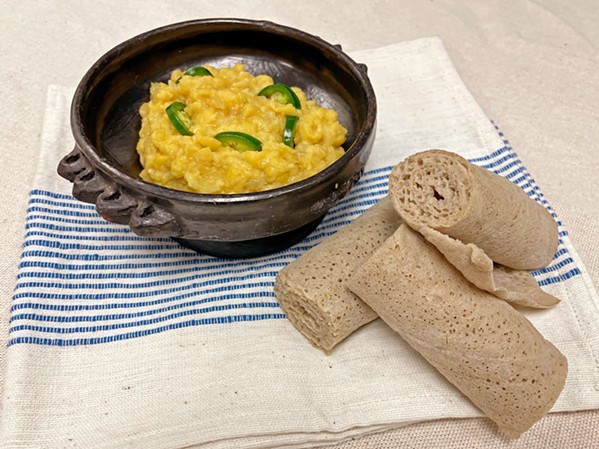 Named for Africa's prized ornamental hardwood, Ebony is the brainchild of four Ethiopian women, two of whom are silent partners. Chefs Helen Abraha and Martha Taezaz helm the kitchen. They are also sisters.

"I was born in Addis Ababa," said Abraha, who serves as executive chef and will develop Ebony's seasonal menus. "My parents had 10 of us, and I was the eighth child." Reflecting on her upbringing in Ethiopia's capital and largest city, Abraha said the family home featured "a big garden with lots of fruit trees such as plums, lemon, olive trees, passion fruits, and a vegetable garden with tomatoes, carrots, beans, spinach, all kinds of lettuce, and different kinds of herbs."

"The weather is beautiful all around the year," she continued, "Therefore, harvest season is all year.

"After school, we all had chores in the house, which included helping with the cooking or cleaning or gardening. As a young girl I loved to spend time in the garden and also helped my mom with her cooking. My mom was a great cook of traditional Ethiopian foods as well as Italian cuisine, and I got most of my cooking lessons from her."

In the 1990s, Abraha moved to New York, then New Jersey, where she launched her career.

"In 1996, I was employed by the New Community Corporation, where I served in different positions for almost 25 years," she said. "But I was always interested in going back to college to acquire extended knowledge in culinary art." 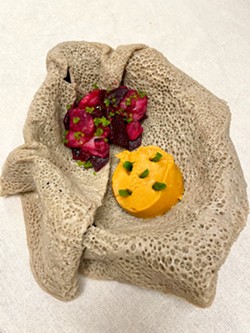 After graduation in 2019, she became a food service manager for the corporation until 2021, and now she runs a New Jersey-based food catering company.

She plans to rotate between coasts as needed to help develop and grow Ebony, and will potentially make a permanent move to SLO based on the restaurant's success.

Taezaz, meanwhile, Ebony's only full-time employee, has both food-handling and business experience, as well as a love of different cultures.

After graduating high school, she completed a one-year course in catering, food preparation, food safety, handling, and service at the Hotel and Tourism Training Institute in Addis Ababa, followed by a bachelor's degree in business administration from the capital's Royal University College.

She has worked at various international organizations and governmental bodies, including the U.S. Agency for International Development, IKEA, and the embassies of Zimbabwe and the Netherlands.

"I have traveled to different regions of my country Ethiopia, and to some countries in Europe and Asia to satisfy my interest in learning diversity in cultures, and life in general," she said.

In 2016, she relocated to Alexandria, Virginia, then in late 2021 moved to SLO to join Ebony's launch team.

"I will be the cook at Ebony following the standards and recipes of the chef [Abraha]," she said. Ethiopian food is a celebration of friends and family, with slow-cooked, often spicy dishes that are meant to be shared, the chefs say.

All meals are accompanied by injera, a tangy, porous bread that doubles as an eating utensil. Injera's primary ingredient is teff, a super grain native to Nigeria and rich in complete proteins, fiber, magnesium, iron, and calcium.

All four of Ebony's partners tout the quality and healthfulness of their products, importing traditional spices from Ethiopia and partnering with local growers for items such as onions, garlic, vegetables, and lentils.

The chefs cook with avocado oil, and all meals are organic, gluten-free, and vegan. 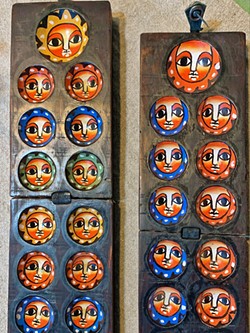 The team also shares a goal to support local needy families by providing free food on a regular basis. Details on their philanthropic efforts will be ironed out once the restaurant gathers steam.

Currently, Ebony is open Monday, Wednesday, and Friday from 11:30 a.m. to 4 p.m., or until supplies last. The limited takeout menu, available for pre-order or walk-in clients, is posted on its Instagram account and includes rotating dishes such as shiro wot, spicy misir wot, and ater kik alicha wot.

Wot is stew, jazzed up with a wealth of spices, primarily berbere and turmeric—and jalapeño for the more adventurous.

Ben Arrona, owner of Benny's Kitchen as well as Benny's Pizza Palace and Social Club in SLO, was excited to play a part in launching the new restaurant.

"I have two goals at Benny's—to bring more culture and flavor to SLO while supporting businesses of color," he said. "Ebony hits both of those goals with one delicious company."

Eventually, the team behind Ebony plans to expand hours and menu items, and, as their client base grows, evolve to a sit-down dining establishment.

Other ideas include brunch and a traditional Ethiopian coffee ceremony—a custom that starts with roasting the beans and would take another article to explain. Suffice it to say, it's not your average coffee. Δ