Citing concerns over growing animosity and division on the SLO County Board of Supervisors, 53-year-old Morro Bay businessman Jeff Eckles will run against incumbent 2nd District Supervisor Bruce Gibson in the 2018 elections.

Eckles told New Times that his final decision on the matter came after he floated the idea on his Facebook page in early January. 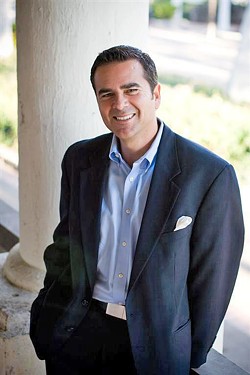 "[The feedback] was overwhelmingly positive," Eckles said. "The idea that we can do better really resonated with people."

Eckles is the owner of the Morro Bay House of Jerky and the former executive director of the Home Builders Association of the Central Coast. Prior to that, he worked for several years as a financial advisor at a firm he founded called Eckles Wealth Management.

Eckles said he decided to run against Gibson because he believed political division among the five supervisors was causing "acrimony and dysfunction" on the board.

"I think it's gotten to the point where it's damaging the political process in the county," Eckles said. "Where we are at today is that you have three Republicans and two Democrats. As a result there is a complete lack of cooperation and civility, and most importantly, a complete lack of communication."

Currently, many of the board's votes break along ideological lines, with conservative leaning members John Peschong, Debbie Arnold, and Lynn Compton voting against liberal leaning supervisors Gibson and Adam Hill. Eckles characterized his political ideology as "fiscally conservative and socially liberal" and said he'd been a "no party preference" voter for the last 12 years.

"I think the fact that I am truly non-partisan and a moderate [means] you'd have someone on the board who is not at either extreme, as it appears today," he said.

Campaign finance records showed that Eckles donated $145 to Peschong's campaign for 1st District supervisor in October 2016, which Eckles said was because he liked Peschong's platform "in regard to responsive and responsible government."

The candidate may face hurdles in connection to his work for the Home Builder's Association, which voiced support for repealing the county's inclusionary housing ordinance while he was its executive director. Eckles noted that as director of the association he was not a policymaker.

Eckles said he would file paperwork to run against Gibson by Jan. 18.

The second supervisorial district includes much of SLO County's north coast, stretching from the Monterey County line to Los Osos and parts of San Luis Obispo. The district also includes the city of Morro Bay, as well as the unincorporated communities of San Simeon and Cambria.

Gibson's is not the only supervisorial seat to be contested in this election. Last year, Arroyo Grande resident Jimmy Paulding announced his plans to run against Compton, currently the 4th District supervisor.