Gorgeous and with a rich history, the region produces superb wines and the best are yet to come 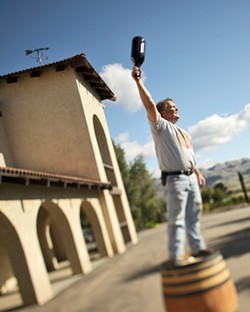 While reading about winemaker Mike Sinor’s upcoming wine tasting in Edna Valley on Nov. 8 during the SLO Vintners Harvest Celebration, which he described as a “Full Circle Tasting with Sinor-LaVallee at Corbett Canyon Winery,” I reflected upon the Edna Valley region’s impressive history. Although Corbett Canyon (who can forget those old “canyon, canyon, canyon” commercials?) was a pioneer in Edna Valley, it has been closed to the public for 12 years. Recently purchased by Rob Rossi, it re-opened this year as a custom crush facility where Sinor (among other small production winemakers) now produces his wines. For the first time since fall 1997, Corbett Canyon will open to the public for one day during the SLO Vintners Harvest Celebration, Nov. 6 through Nov. 8.

The halcyon Edna Valley wine region is among California’s smaller American Viticultural Areas (AVA) at 22,400 acres (Paso Robles AVA is 666,618 acres), but it’s had an impressive history since its start in 1973. Some wine writers still describe Edna Valley as Chardonnay country, but that belief is outdated. The Chardonnay, Pinot Noir, Syrah, and Grenache grown there have been stellar, and it’s clear the Spanish varietal Albarino can rank among the best in this country, all depending on the vintage, of course. With almost four decades of winemaking in Edna Valley, they haven’t hit the top of the barrel yet. These wineries are still discovering, as proven by their outstanding producers, the potential for wine varieties here.

Established as an AVA in 1987, Edna Valley began with two vineyards planted in 1973. It started when Jack and Catherine Niven planted Paragon Vineyard, and (within weeks of each other) Norman Goss planted Chamisal Vineyard, unbeknownst to each other, according to the Nivens. Both families built their wineries in 1980, but only Edna Valley Vineyard survived nearly four decades. Chamisal, named for a native shrub in the region, was a relatively small operation with only 70 acres of grapevines. During the ’80s it fell into decline due to the lack of interest of Goss’s children.

Andy MacGregor began planting his vineyard at the corner of Price Canyon and Highway 227 in 1975; a few years later he planted his larger vineyard on Orcutt Road (now Wolff Vineyards). The fourth in Edna Valley was Corbett Canyon, founded in 1978, but it was sold several times. Over the past decade, however, Chamisal Vineyard, and now Corbett Canyon have been revived. Chamisal Vineyard was restored in 1994 when Alfred “Terry” Speizer bought the historic property and modernized the declining vineyard. He introduced his Domaine Alfred label in 1998, with Sinor as winemaker, and earned critical acclaim. Ten years later, Speizer sold it to the Crimson Wine Group, who renamed it Chamisal Vineyard early in 2009 in tribute to its past as an Edna Valley pioneer. Like their other ultra premium wineries, Pine Ridge and Archery Summit, Crimson will keep Chamisal Vineyard focused on high quality.

The Niven Family has the longest record for continuous production in Edna Valley from Paragon Vineyard with more than 500 acres of premium wine grapes. Originally they sold grapes to Napa wineries, among other regions. Today, under the third generation, the highly respected, pioneering family has established the Niven Family Wine Estates, which includes: Baileyana, Tangent, Trenza, and Cadre. Only the Nivens’ first winery, Edna Valley Vineyard, was a partnership with the renowned Dick Graff of Chalone Vineyards. Edna Valley Vineyard is still co-owned but now the Nivens are partnered with Diageo North America.

From the beginning the Edna Valley region attracted attention for the quality of its premium wine grapes, which lured renowned Napa Valley winemaker Chuck Ortman, a consultant for Beringer. Naturally, Ortman relocated to the area when Beringer bought Meridian (which Ortman originally founded under his name in 1979) and moved it to Paso Robles in 1984. When Ortman retired in 2003, he put his energy into his family label, Ortman Family Vineyards, for which his son Matt is winemaker in Edna Valley.

The event at the old Corbett Canyon site is sure to be interesting. Mike Sinor and his wife Cheri LaVallee, hence the label Sinor-LaVallee, both started their wine industry careers at this winery. They met at Cal Poly while studying chemistry, about which he laughed: “We like to say we had chemistry.” And winemaker Matt Ortman has moved production of his family’s brand there.

Like France’s great wineries, handed down through the original families for centuries, Edna Valley’s second and third generations have taken over their families’ wineries. And it’s clear their sons and daughters have inherited the passion of their fathers before them.

This popular weekend festival features most of our great South County wineries with a few guest wineries from the north and south AVAs. It starts Friday night with winemaker dinners: Ancient Peaks has a gourmet pizza party; Baileyana and Tangent at Novo; Claiborne & Churchill at Buona Tavola; Tolosa at Et Voila; Wood at Sycamore Mineral Springs; and more. On Saturday the grand tasting and auctions take place at the Avila Beach Golf Resort, from 1 to 5 p.m. With more than 50 wineries and 23 restaurants to keep you sated, live auctions and live music to keep you entertained, it makes for a great afternoon at the beach. You’ll find our best local restaurants there, too: Buona Tavola, Corner View, Cracked Crab, Lido, Neon Carrot (chef Maegen Loring’s new eatery opening soon in SLO), Mee Heng Low Noodle House, Novo, Orchid, Sycamore Mineral Springs, among others. There will also be such treats as Ray’s Own Brand and Sweet Earth Organic Chocolates. The Central Coast Vineyard Team will feature an educational booth to teach wine lovers more about the outstanding vineyards throughout the Central Coast.

Remember to keep your wineglass and ticket from Saturday’s grand tasting: they’ll make you a VIP with free admission on Sunday when traveling the Edna, Arroyo Grande, and Avila Valley wine trails. The wineries will be offering open house parties with wine, food, and entertainment. Of course, if you’re a club member at any of these wineries, you always get the VIP treatment. Anyone can join the fun with prices ranging from $5 to $15 admission. There is one winery offering free admission to all, Kelsey See Canyon. The outstanding enticements at these wineries include: a taco feast; a jambalaya cook-off among chefs; White Castle hamburgers; bocce ball or horseshoe games; and special discounts on wine purchases. Get all of the details about who’s offering what, reservations and/or tickets by visiting slowine.com. This is a great weekend event whether you’re a wine collector or an occasional imbiber; there’s something to please everyone.