The Marriage of Figaro is a comic opera involving several pairs of would-be lovers, some faithful, some less so, recounting their exploits on a single day in a Spanish palace. For a more extensive synopsis, look online. For insights about the habits and lives of the performers who will be bringing the characters of sweet Susanna and gallant Figaro to life, look no further. From questions insightfully generated by Pacific Repertory Opera Marketing Assistant Carolyn Mason you’ll learn that there’s a lot more to opera singers than Viking helmets and spears. 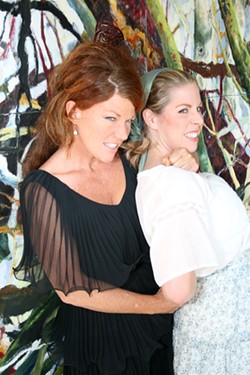 NEW TIMES Do you have an unusual hobby?

CADELAGO I’m an avid runner. In 2004, I ran the Napa Valley Marathon (my first) with my dad, who has run it every year since its inception.

CADELAGO It’s the ideal blend of individuality with an ensemble.

CADELAGO It’s just not my look.

NEW TIMES Tell me two truths and a lie about yourself.

CADELAGO I’m allergic to cats, I have a twin, and I can write backwards.

CHOI I guess you could say everything, including mens’ hearts. Just kidding! I’m a pack rat and never throw anything away.

NEW TIMES What is something people would never guess about you?

CHOI I teach a hip-hop class.

CHOI It’s fun! The challenge of delivering a theatrical piece in a different language while acting is awesome.

CHOI We’re not all huge people in Viking hats.

CHOI Yes, but that’s because that was my school mascot in high school.

NEW TIMES Do you have an unusual hobby?

DUNN I like to find unusual plants. When I see one when I’m out walking I like to collect it and grow it. I love succulents they’re invincible and they have beautiful blooms.

NEW TIMES Do you collect anything besides plants?

NEW TIMES What do you do in your spare time?

DUNN I like to get out and surf. I haven’t been able to do it lately but the joy of finding a good babysitter who can come at a moment’s notice if the waves are good is a real blessing.

DUNN It’s all-encompassing. It works all your senses all at once. I like being able to move people with it. I was a shy kid but in opera you can be someone else and it’s exciting.

DUNN That we’re the stereotype—standing around on stage, fat, and don’t have a life. We’re not up in the clouds. We’re like everyone else.

PENCE I have a deep and abiding love for comic books. I especially like oversize, hardbound comics. I generally avoid the term graphic novel as it has come to mean comics being read by people who are ashamed of reading comics.

NEW TIMES What is the best thing you’ve ever received before, during, or after a performance?

PENCE My wife. We met during a student production of Eugene Onegin.

PENCE No one gets angry at me for being too loud.

PENCE That we don’t like popular music. After a long day of rehearsing Mozart or Verdi, I find that Tom Waits is good for the soul.

NEW TIMES Tell me two truths and a lie about yourself.

STINSON I collect vintage clothing and jewelry and I collect cookware from the 1950s (like old CorningWare). I also collect music.

STINSON Most singers are just normal people who, at the end of the day, want to go home to friends and family, want to be home at holidays like everyone else. The problem is, the career often takes you away from these things. I have had the pleasure of meeting and speaking with some very famous opera singers, and they are really down to earth people with a slightly unusual profession.

STINSON Yes. I sang for a year in the San Diego Opera ensemble. We had a show that featured German music. At one point in our show, I would come out with horns and a spear and sing “Ho Yo Yo Ho!!!” One time at a San Diego high school, I came out doing this and didn’t realize the ceiling was low. I loudly sang my Ho Yo To Ho and lifted my spear high above my head and banged the ceiling at which point pieces of it fell on my head. The kids were in an uproar as well as my colleagues on the stage.

*One of thousands of nonsensical anagrams for Le nozze di Figaro.

Pacific Repertory Opera will perform Le Nozze di Figaro (The Marriage of Figaro) at 8 p.m. on Oct. 31 and Nov. 1 at the PAC. Tickets range from $12.50 for students and children to $65. To purchase tickets visit www.pacslo.org or www.propera.org or visit the PAC box office.