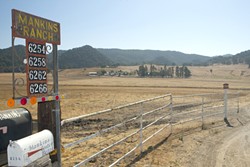 The report, released June 17, lists five potentially unavoidable environmental impacts that would result from the project.

Headed by Excelaron, a local subsidiary of the Australian Oil Company, the project was first proposed in 2007. Company officials originally said they planned to drill only four wells, and the project was slated to go through the approval process under a Mitigated Negative Declaration. However, a group of Huasna residents known as the Huasna Valley Association (HVA) countered company assertions with their own suspicions that the project’s true scope hadn’t been fully disclosed.

In 2009, Excelaron withdrew its first application. Soon after, it resubmitted a plan to drill four exploratory wells, then another eight wells if the first were found to produce enough oil. The new project was required to have a more stringent EIR.

The release of the current draft EIR signals a 45-day comment period, after which county officials will review the comments and begin formal public hearings on the project. San Luis Obispo County planning commissioners are tentatively scheduled to hold the first public hearing on Nov. 10. HVA members requested a 15-day extension to submit comments given the scope of the EIR, but were denied any extra time.

“Our initial examination is that there’s a number of Class 1 significant impacts which are going to change the nature of the Huasna Valley,” HVA coordinator and Huasna resident Ron Skinner said.

The most severe impacts include obscuring scenic vistas, odors from oil vapors, potential biological impacts in light of an oil spill, and noise, according to the draft EIR. Other mitigatable impacts include traffic from oil-hauling truck trips and the potential for pollutants to flow into water sources.

Carol Florence of Excelaron’s representative, Oasis Associates, said the draft EIR was a vindication because many of the impacts are less than significant or can be mitigated.

“Excelaron is committed to mitigating all of these concerns,” she said.

Residents are concerned that the EIR’s scope seems to go beyond what they were told at the last scoping meeting in January 2010. According to Skinner, the project outlined in the EIR will require more electricity and propane than the last description indicated, which has residents worried the 12 wells are just the beginning of larger plans.Florence said the increase is likely a “worst-case scenario” of the power necessary to drive the project and not indicative of a larger project scope.

On Feb. 17, Excelaron’s principal investor in the Huasna project, United Hunter Oil & Gas Corporation (UHO), announced it had oil exploration leases on 4,068 acres of Porter Ranch, which is also in Huasna Valley. In a letter to investors, the company said “it is possible that two exploration wells could be drilled as soon as approvals are granted by the county.”

Excelaron officials have maintained that the Huasna project will not expand in scope or become, as residents worry, like the Price Canyon oil fields outside the city of San Luis Obispo.