Ten residents at the Port of San Luis Trailer Park in Avila Beach are facing eviction from their landlord of more than 25 years: the Port San Luis Harbor District. 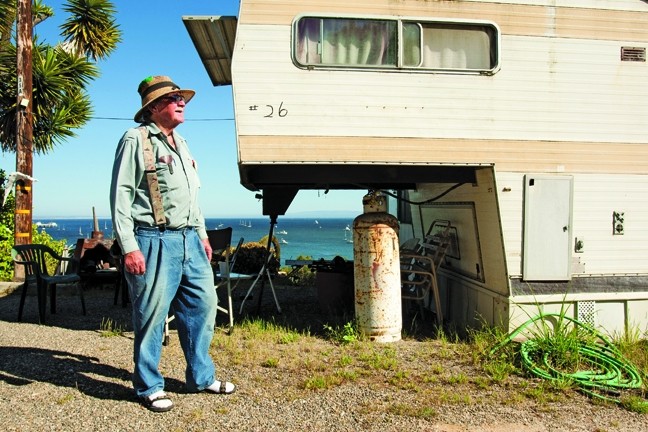 In 1984, the Port Harbor District took over the small trailer park, located on superior real estate overlooking the ocean. At the time, port officials took on responsibility of the park to save residents from eviction. The state Senate even passed a bill allowing the district to own and operate the trailer park.

Today, the 10 remaining park residents are facing eviction once again. The Harbor District wants to relocate them to make the land available for public use, and use the revenue generated to ensure financial stability in the region, as described in the district’s harbor master plan.

The district’s board of directors has yet to officially schedule the park’s closure and conversion. After resident protests, the district decided to push a final decision farther out and scheduled a public hearing for June 28.

“If residents are still there by the time we shut the park down, they will be compensated for relocation or receive the value of their coach based on appraisal,” Harbor Manager Steve McGrath told New Times.

Though that might sound like a fair deal, all of the current coaches in the park—excluding those for the camp hosts—can’t be moved to other parks because they’re old and outdated. In fact, due to restrictions outlined in the state legislation, residents would be evicted if they bought new trailers or moved to different spaces within the park.

Though the current residents—the youngest of whom is 61—say they’ve been good tenants, they still fear eviction. Tom McAlexander, 79, has been fighting the district for more than a year to keep his home, where he hopes to live out the rest of his life. He said park residents were told they could stay on the property until they move away, get evicted for breaking rules, or they die.

“Logic stops at the San Luis Creek Bridge,” McAlexander said. “We are not against them making money. We would just like to be relocated in the park. It is simple to move us to the top level and let us live out the rest of our lives.”

McAlexander was the park manager before 1984 and maintained the property when it was full of residents. Now the property is in poor condition and hasn’t been maintained by the district for years, he said.

McAlexander understands that the park will inevitably close, but he said he wants the Harbor District to follow the rules set by the state and to allow the current residents to stay without fearing eviction. ∆