A push by more than 200 property owners in North County to form a second water district over the Paso Robles Groundwater Basin will reach its finish line on Oct. 17, the last day of the district's mail-in election. 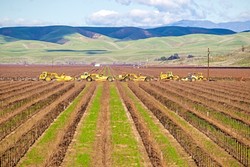 Both districts were launched to play prominent roles in the upcoming discussion about groundwater management for the Paso water basin, a 780-square-mile aquifer critically depleted during the last drought. When Paso basin overliers voted down a contentious proposal in 2016 to form one water district to govern the whole basin, local agricultural stakeholders splintered into the two "voluntary" water districts, which means area property owners can decide whether or not to be included in the districts' boundaries.

"We lost a lot of time fighting about all this," said Dana Merrill, owner of Mesa Vineyard Management near Templeton and one of the prospective board members of the EPC Water District. "[The two water district scheme] is different than the original vision, but it has some of the same elements. I think we can work on this and make some progress on it."

Several of the region's most well-known winemakers—and a few lesser-known stakeholders—have been steadily supporting the EPC Water District formation effort through financial contributions.

Since a district formation committee was started, it's received close to $70,000 in donations. The highest donation of $18,500 came from the now-disbanded Paso Robles Agricultural Alliance for Groundwater Solutions (PRAAGS), which was formed in 2013 and included leading stakeholders from both water districts.

If successfully formed, the EPC Water District will need the SLO County Board of Supervisors' approval to join the Paso Basin Cooperative Committee, which is tasked with writing a Groundwater Sustainability Plan for the basin. The plan is mandated be in place by 2020 by the California Sustainable Groundwater Management Act. The Paso Basin Cooperative Committee will begin its meetings on Oct. 18.

While the Shandon-San Juan Water District made it into the committee by launching before a June 2017 deadline—joining the county, the city of Paso, and other smaller agencies over the basin—the EPC district is arriving late in the game.

"I'm still counting on us being [a member on the committee]," Merrill said.