Earlier this year, I saw Sharon Jones & the Dap-Kings open for the great Tedeschi Trucks Band, and I couldn’t help but feel sorry that they had to follow Jones’ electrifying performance. Heck, I would’ve felt sorry if the Rolling Stones had to follow Jones, who has the sort of joy and energy that comes from surviving cancer. 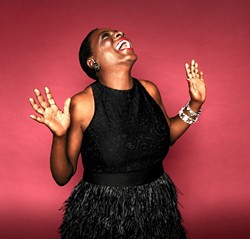 Best known as a live act, Jones’ most recent album, Give the People What They Want (2014) was nominated for the Best R&B Album Grammy Award and led Augusta, Ga., to instate a “Sharon Jones Day.” I would have given her a “Sharon Jones Month”!

Next Thursday, Oct. 29, at 7:30 p.m. in the Performing Arts Center, Jones & the Dap-Kings will deliver the goods—electrifying soul honed over more than a decade of sold-out concerts worldwide and TV appearances on the likes of Saturday Night Live.

“Other stellar moments include when Jones and the Dap-Kings were invited by Prince to open for his shows at New York’s Madison Square Garden and in Paris; when they joined John Legend and the National Symphony Orchestra to re-imagine Marvin Gaye’s ‘What’s Goin’ On’ at the Kennedy Center, and performing with the LA Philharmonic at the Hollywood Bowl,” reminded press materials. “The Dap-Kings backed Beck as the musical core of his innovative ‘Hello Again’ project, worked with David Byrne, and laid down studio tracks with producer Bob Rock. Jones has collaborated with David Byrne, They Might Be Giants, Rufus Wainwright, and Lou Reed. She also acted and sang in the Denzel Washington film, The Great Debaters, and the band joined her in the movie, The Wolf of Wall Street.”

Also at Cal Poly this week, check out Las Cafeteras during their “Dia de los Muertos” concert on Sunday, Oct. 25, at 7 p.m. in the Spanos Theatre. This promises to be a unique musical and cultural experience, “celebrating the living and honoring those who have passed through dance, movement, and songs.” Expect punk, hip-hop, beat music, cumbia, and rock sounds. Student and adult tickets are $27.20 and $34.

Is that you, Mozart?

How many 17-year-olds get to collaborate with Yes singer Jon Anderson on an original classical guitar concerto? I only know of one, Andrew Rubin—member of the trio The Spaces Between and the duo Andrew & Anya—who also happens to be the son of syndicated Rubes cartoonist Leigh Rubin. 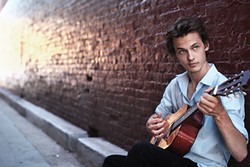 About three years ago, Rubin, now 20, met Anderson and started visiting him at his Central Coast studio. During a KCBX radio interview, Anderson said he recognized Rubin was a “great guitar player” with “great talent,” so he basically began mentoring him, offering suggestions on improving the ideas Rubin shared with him.

Their collaboration eventually led to a three-movement concerto, which Rubin subsequently scored for orchestra. Enter Bob Liepman, president of the San Luis Obispo Chamber Orchestra and member of the folk duo Bob & Wendy as well as Shadowlands.

Liepman offered the orchestra to perform the debut of Rubin and Anderson’s composition, and this Sunday, Oct. 25, you can witness the world premier of their guitar concerto in a program that will also include Shadowlands performing two of their compositions with the orchestra, which will also perform selections from Schumann’s Symphony No. 1 and Copland’s Outdoor Overture.

See all this at 3 p.m. in Trinity United Methodist Church in Los Osos for a $10 donation. Because no advanced tickets will be available, it’s advisable to arrive at least an hour early. Orchestra members will provide intermission snacks for the audience.

As for Rubin, this promises to be just the beginning of his composition career. “He’s currently working on his third classical piece, and aims to continue with great vigor the writing and performance that brings him so much joy, as well as further exploration and progress in all branches of his musical career,” his bio reads.

If anyone has taken the baton from heavy metal rocker Alice Cooper and run with it, it’s Marilyn Manson, a performer whose on-stage theatrics, creepy costuming, and screaming vocals have made him (Her? It?) a hero to everyone from angst-ridden adolescents to their adult death metal counterparts. 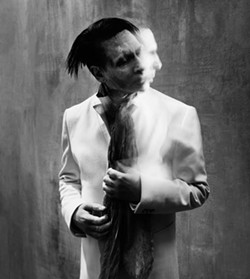 Born Brian Hugh Warner, he hit the scene in 1994 with his debut Portrait of an American Family, but really hit his commercially successful stride with his third and fourth albums Antichrist Superstar and Mechanical Animals. This year he released his ninth studio album, The Pale Emperor.

Instead of Manson’s typical industrial rock sounds, the new album’s instrumentation is sparser and the melodies more blues influenced. On a more somber note, Manson dedicated the album to his mother, who died during its making after an eight-year battle with Alzheimer’s disease and dementia.

This Friday, Oct. 23, Manson and special guest Head Wound City play Vina Robles Amphitheatre at 7:30 p.m. (doors at 6 p.m.; all ages; $40 to $55; visit vinaroblesamphitheatre.com). The show has a General Admission Pit in the front for your moshing pleasure.

Whether you’re in the mood for Red Dirt country, pre-war blues and jazz, or old-school punk, SLO Brew’s got you covered.

Stoney LaRue and the Arsenals kicks off the week this Thursday, Oct. 22 (7:30 p.m.; 21-and-older; $21.50 presale or $25 at the door), delivering country, blues, and soulful rock sounds into vocal-driven performances. The indie artist has sold a whopping half-million units without help from a major label and just made his debut at the Grand Ole Opry. His brand new album Us Time was released earlier this month. This one’s brought to you by Otter Productions and 98.1 KJUG.

Eclectic and mesmerizing, The Dustbowl Revival returns to the club this Friday, Oct. 23 (7:30 p.m.; all ages; $15 presale or $18 at the door). The Venice Beach collective “merges old-school bluegrass, gospel, pre-war blues, and the hot swing of New Orleans to form a spicy roots cocktail,” says their bio, which is about as good a description as I can conjure. “Imagine Old Crow Medicine Show teaming up with Louis Armstrong’s Hot Fives and Sevens, or Bob Dylan and The Band jamming with Benny Goodman and his orchestra in 1938.”

Eighties UK anarcho-punk heroes Subhumans play Sunday, Oct. 25 (7 p.m.; all ages; $15), with Love Songs and Maask. From 1980 to 1985, Subhumans seemingly ruled the punk rock universe. They re-formed in 1991, again in 1998, and finally in 2004, going strong ever since. Those last two concerts are thanks to Numbskull and Good Medicine Presents.

Nicole Stromsoe will headline the showcase on Monday, Oct. 26 (6:30 p.m.; free), at Bang the Drum Brewery, “performing an atmospheric blend of eclectic, old soul, jazz, and blues,” according to promoters. Special guests include guitarist Dorian Michael and BanjerDan. 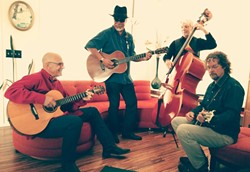 The Cal Poly Music Ensembles will perform this Friday, Oct. 23, at 8 p.m. in Harman Hall of the Performing Arts Center as part of Parent and Family Weekend. Hear the Arab Music Ensemble, the Cal Poly Choirs (PolyPhonics and The University Singers), the University Jazz Band I, the Cal Poly Symphony, and the Cal Poly Wind Ensemble. Tickets are $12 and $14 for the public and $9 and $12 for senior citizens and students. Call 756-4849.

The Young Dubliners, the hardest working band in Celtic Rock, play Sea Pines Resort this Saturday, Oct. 24 (2 to 6 p.m.; $15; theseapines.com), touring in support of their newest album, NINE. From Alaska to Denmark, the band’s ongoing tour never seems to end, but you’ve got to keep those fans happy. “We’re very appreciative of how the band’s fans have continued to support the live shows. Makes for a crazy, enjoyable summer despite the hectic travel schedule,” said lead singer Keith Roberts in press materials. Matthias Clark and Emily Brook will open.

Celtic harpist and storyteller Patrick Ball returns to Painted Sky Studios this Saturday, Oct. 24, for a very intimate 8 p.m. concert. “One of the premier Celtic harpers and storytellers in the world, Patrick is indeed a modern day bard,” Steve Crimmel, Painted Sky owner, said, “playing the ancient, legendary brass-strung harp of Ireland with its crystalline, bell-like voice, and telling marvelous tales of wit and enchantment.” Tickets are $20 available in The Cambria Music Box Shoppe, Boo Boo Records, or by calling 927-8330.

The CC Riders—Louie Ortega and Dorian Michael (guitars), Kenny Blackwell (mandolin), and Ken Hustad (bass)—will play Tex-Mex, roots country, and blues music this Saturday, Oct. 24, at 8 p.m. in D’Anbino’s Cellars for $12 (call 227-6800 for reservations). These are four of the finest players on the Central Coast, great improvisers, and Ortega shares a Grammy Award with the Texas Tornados.

Jeni & Billy—of whom Sing Out! magazine says, “some of the best Southern music we have heard in a very long time”—bring their original Appalachian story and song to Atascadero’s Brickyard Theatre this Sunday, Oct. 25, with special guest Craig Eastman (6 p.m.; $20 donation; reservations at 466-4653).

The Central City Swing Band will perform their annual Fall Concert on Tuesday, Oct. 27, at 7:30 p.m. in the Unity Chapel of Light Church of Orcutt. The concert will feature music arranged in a swing and modern jazz style, performed by an 18-piece big band and a vocalist. The show’s free, but anything thrown in the donation basket will be split between the venue and performers.

The Body & Thou plays the SLO Grange Hall this Wednesday, Oct. 28, from 6 to 10 p.m. with collaborating acts Heat Dust, Leucrota, and Hollow Sunshine ($8 at the door; all ages; sober space). “For this tour, the bands will be playing as a single seven-piece unit, with a handful of ‘solo’ sets,” according to organizers.