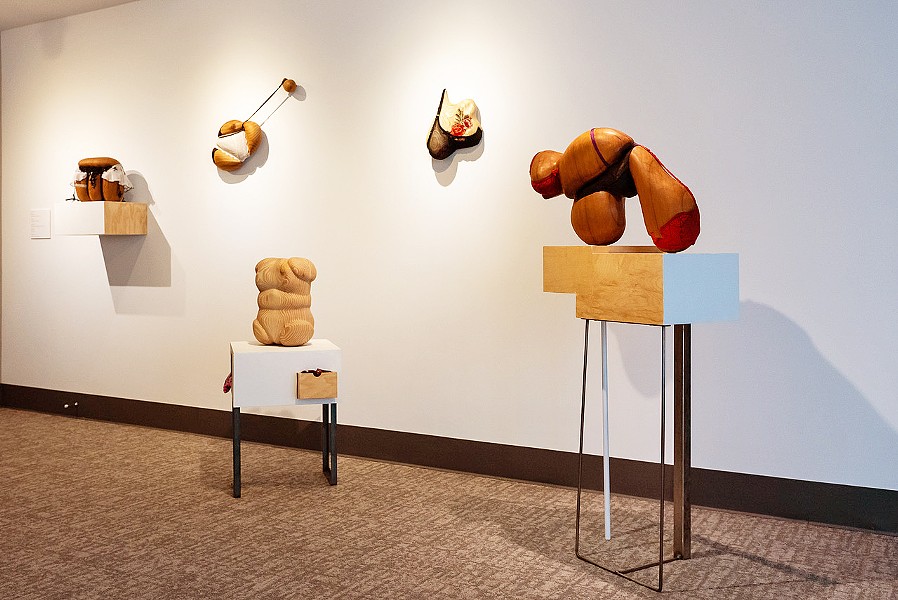 Photos Courtesy Of Elisa Ortega Montilla WOOD AND FABRIC Using reclaimed wood and secondhand clothing, Elisa Ortega Montilla creates art that explores her identity—being a woman with feminist values, maintaining her Spanish identity while living in the U.S., opposing consumerism, and being committed to environmental sustainability.

The San Luis Obispo Museum of Art is now open for in-person exhibits. You can view Objectifying through June 27 from 11 a.m. to 5 p.m. from Thursday through Monday at 1010 Broad St. in San Luis Obispo. To see more of Elisa Ortega Montilla's art, visit elisa-ortega-montilla.com.

Plywood grains curve, bending into a soft round shape plopped into half of an old black mesh bra. At its base, pink, red, and white petals make their way up to a misshapen second half, embroidered and pressed into the wooden beauty of Asimetría.

Artist Elisa Ortega Montilla said she's had a lot of women reach out to tell her how much they related to it.

"They all had breast cancer and it felt like a celebration of it," she said. "And the flower made it feel like the replacement of the breast that was taken."

Although that wasn't quite what Ortega Montilla was going for when she put the piece together, it's not important. What matters is how the pieces she creates speak to whoever's viewing them, she said.

"I love it when people share, because then I can see my work expanding outside of what I'm just creating," she said. "I love creating things that create confusion or create questions and just leaving it open to interpretation. ... Sometimes it's autobiographical in detail and sometimes it's just a reference point for people to look at and relate to it in different ways." 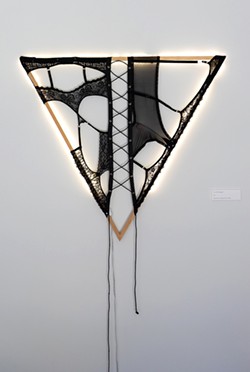 Ortega Montilla said she's trying to develop a body of work that doesn't necessarily replicate the specific shapes of male or female body parts; rather her pieces are made up of shapes that evoke them—distortions of the body or a part of the body. Mostly, those pieces investigate what it means to be a woman, the language that we use to talk about women, and the constructs embedded in how society perceives gender. Several of Ortega Montilla's pieces are on display at the San Luis Obispo Museum of Art (SLOMA) through June 27 in Objectifying, one of the museum's first exhibits that's open to the public for in-person viewing since the COVID-19 pandemic started.

SLOMA Executive Director Leann Standish said the museum is fortunate to have Ortega Montilla's thoughtful work in their program now that SLOMA's open again. Visitors have really responded to the show, which Standish said could indicate a new direction for the museum and the kind of work it displays.

"I think it is an important show, and I'm so impressed by Elisa's beautiful pieces. The fluidity of the sculptures really strikes me," Standish told New Times via email. "Elisa was a social worker before she dedicated herself to her art, I think that is relevant and important when considering exhibitions for the museum. Our programs are meant to explore interdisciplinarity and ways that the work on our walls can teach us something about the world we live in."

SLOMA's role in the community, Standish said, is to inspire conversation and facilitate a place where discourse can take place.

As a social worker, Ortega Montilla worked with women in the gypsy community of Spain as well as victims of domestic violence in Guatemala. In 2012, she moved to the United States from Spain because of the country's economic crisis. She did social work in LA with women from the LGBTQ-plus community and case management with homeless youth in Hollywood for about five years before applying to art school at UC Santa Barbara. 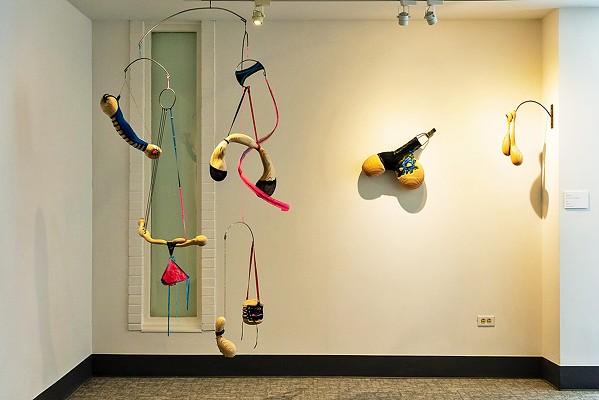 The art she creates is an intimate reflection of her lifetime experiences, as a social worker, as a woman, as a feminist, as a Spanish woman in the United States, as a child who grew up in Spain a decade after it transitioned from a fascist dictatorship. Austerity measures that her parents lived through were very much a part of her childhood.

"Everything that I wore was like mended or fixed, everything had second and third and even fourth lives if they could be fixed," she said.

Which is part of the reason why her art recycles already used products, such as reclaimed beams, old pieces of plywood, and used women's underwear. Ortega Montilla takes care to ensure the wood shows that it's on a second life. Glue seams, screws, and the bruises that come with use break up the perfection of the wood she sculpts.

"As an artist I was really interested in giving life to materials that were discarded, especially now, because consumerism is at an all-time high," she said. "Using reclaimed materials is trying to aim with those values of sustainability."

A painter in high school, Ortega Montilla applied to school with a portfolio of figurative paintings of women—the untold history of women she wasn't taught about in school. But when she arrived at UC Santa Barbara, she came across the woodshop while she was on a tour of the art facilities. 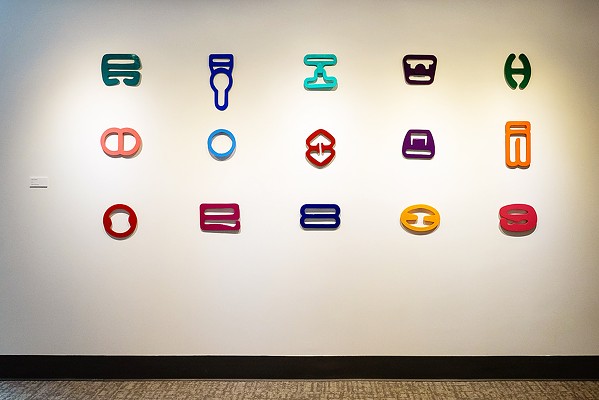 "I was like, 'fuck, I have to be here,'" she said. "I just felt a very visceral attraction to being in this space and working with wood."

Although UC Santa Barbara doesn't teach wood-sculpting classes, Ortega Montilla taught herself how to sculpt it with the help of a woodshop technician—which is what she does now.

Everyone will understand her work based on their own perspectives, Ortega Montilla said, but the body parts she sculpts and the way she attaches pieces of fabric to them create images that are familiar to everyone simply because of the way society talks about gender.

"If I allow my intuition to guide me, and I just focus on the materials and what they do to each other, then these things happen in a very subtle way," she said. "Like a coincidence or not, because it's all based on the images we are exposed to as women." Δ