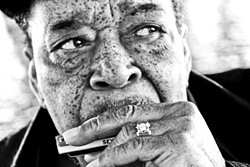 I'm listening to James Cotton’s new album Cotton Mouth Man, and his harmonica playing is just flat-out mesmerizing. He does things with a mouth harp that no one else can do, which is probably why he was able to enlist a bunch of incredible guest vocalists—everyone from Gregg Allman to Keb Mo to Ruthie Foster to Delbert McClinton to Warren Haynes on the new album. Or maybe it’s because Cotton is a living legend.

He started his career in the ’50s playing blues harp in Howlin’ Wolf’s band, made his first solo recordings with Sun Records, and cemented his career by playing harp on Muddy Waters’ Grammy-winning 1977 album Hard Again. He’s 78 years old now, and he doesn’t sing much anymore (he sings on the final track of his new album), but he’s working with a great singer, Darrell Nulisch, who appears on six of the new album’s 13 tracks, as well as an incredible touring band: Tom Holland (guitar), Noel Neal (bass), and Jerry Porter (drums).

“My audience always tells me how I’m doing,” said Cotton on his website. “If I look out there and don’t like what I see, I work harder.”

It’s hard not to be impressed with the sounds coming out of his harp, and his new album will nourish the soul of any blues lover.

James Cotton plays Thursday, Feb. 27, at the Performing Arts Center’s Cohan Center (7:30 p.m.; all ages; student and adult ticket prices from $29.20 to $59; call 756-4849). But that’s not all! Opening the show is Paul Thorn, a former boxer who’s been called the “Mark Twain of Americana.” On his newest CD, What The Hell Is Goin’ On?, he delivers gritty takes on some of his favorite songs, including the title track penned by his friend Elvin Bishop, who—did I mention?—headlines the show next Thursday at the PAC! 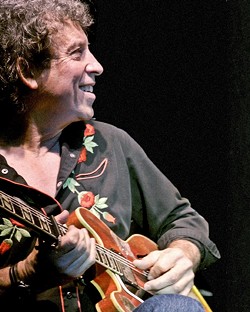 Elvin Bishop has long straddled the blues and rock worlds, slipping in and out and between them with equal aplomb. He first joined Paul Butterfield’s blues band, later played with Mike Bloomfield and Al Kooper, and eventually worked with everyone from The Allman Brothers to Clifton Chenier to John Lee Hooker to Bo Diddley to B.B. King. He’s best known for songs like “Fooled Around and Fell In Love,” “The Things That I Used to Do,” “Party ’Til the Cows Come Home,” and “Honey Bee.”

This will undoubtedly be an amazing show for fans of blues, blues-rock, and roots music.

As of last Tuesday, there were still tickets for Jeff Bridges & The Abiders, playing this Friday, Feb. 21, at the historic Fremont Theater (doors open at 6:30 p.m.; all ages; $40 presale at all Vallitix outlets including Boo Boo Records and online at vallitix.com; $45 at the door). Bridges will perform songs from his two solo albums, songs from the Crazy Heart soundtrack, and select covers. Hanging with The Dude in Fremont Theater? Priceless! This concert is sponsored by SLO Brew, which will also host a few shows at the club this week.

Night Riots return to the Brew on Friday, Feb. 21 (7 p.m.; all ages; $10 presale or $12 at the door), to finish off the end of a month-long tour that took the band through Arizona, Texas, Oklahoma, Missouri, Colorado, Utah, Oregon, and California. Their most recent EP, Young Lore, features six hooky rock tracks accented by lead singer Travis Hawley’s emotive and distinctive voice. These guys remind me of early U2 or classic ’80s acts such as Tears for Fears or the Cure. Harmony vocals and soaring choruses make this band sound stadium-ready. They’ve also gotten plenty of near-stardom accolades. They were one of the top unsigned bands in a Rolling Stone magazine competition, and MTV named them one of “The Most Criminally Overlooked Artists of 2012.” The Epilogues will open the show.

Reggae fans can rest assured that Natural Incense and Nada Rasta, playing Saturday, Feb. 22 (7:30 p.m.; all ages; $10 presale or $12 at the door), will deliver a night of energetic, locally grown reggae. Get irie.

If you’re looking for a night filled with surprising punk and alt rock, get thee to The Thermals, Colleen Green, and Fialta show on Sunday, Feb. 22 (7:30 p.m.; all ages; $12 presale or $13 at the door). Each of these acts delivers a roundhouse punch of awesomeness right to your ears. You won’t know what hit you! 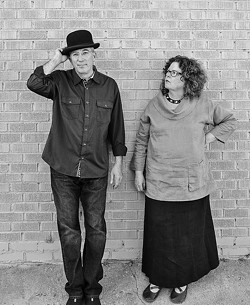 This Friday, Feb. 21, at 7:30 p.m. in the Cuesta CPAC, enjoy the sounds of The 10th Annual Cuesta Music Faculty Concert. The amazing Cuesta music faculty plays and sings, with 100 percent of the proceeds going to student scholarships. You’ll hear jazz, classical, folk, and more, with scheduled performances from Ron McCarley, Inga Swearingen, Jumi Kim, Jeff Miley, Cassandra Tarantino, Jennifer Martin, Darrell Voss, Marcy Irving, Aaron Wolf, Idona Cabrinha, Ken Hustad, and more! Order and print your tickets online at cpactickets.cuesta.edu and you can avoid the box office line. Parking is free for all of these events in Lot 2, just outside of the CPAC!

If you dig Unfinished Business and their approach to the great music of the ’60s, you’ll no doubt also love their offshoot power trio band Triple Down Theory, the brainchild of Ed Miller, who also formed Unfinished Business. They cover songs by The Beatles, Jeff Beck, Chuck Berry, Eric Clapton, Dick Dale, and other iconic acts from the ’60s and ’70s. Check them out this Friday, Feb. 21, at D’Anbino’s (7:30 p.m.; $10; call 227-6800 for reservations).

This Friday, Feb. 21, at 8 p.m. in the Performing Arts Center’s Cohan Center, Cal Poly Arts proudly presents the Bahia Orchestra Project. The 100-members orchestra is based in Salvador da Bahia and is conducted by acclaimed pianist Ricardo Castro. They perform in the Brazilian Carnival tradition as well as samba music, both of which originated in Salvador. (Student and adult tickets are $28.40 to $58; call 756-4849.)

SLOfolks presents Molly O’Brien and Richard Moore in concert this week on Friday, Feb. 21, at Coalesce Bookstore (7 p.m.; $20; call 772-2880) and on Saturday, Feb. 22 (7:30 p.m.; $20; call 238-0725). The singer-songwriter husband-and-wife duo mixes contemporary folk, powerhouse gospel, funky dance music, and everything in between. O’Brien is a Grammy Award winner and was a regular on the nationally-syndicated radio show A Prairie Home Companion from 2001 through 2005. Husband Rich Moore “is known to produce some of the funniest onstage running commentary, and he’s also a powerhouse guitar player who can keep up with O’Brien’s twists and turns from blues to traditional folk to jazz to rock ’n’ roll,” according to their bio.

Fish Out of Water plays Creeky Tiki on Friday and Saturday, Feb. 21 and 22, from 9 to 11:30 p.m. The local band tours endlessly, playing their 100 percent original rock, funk, reggae, and hip-hop. Over these next few months, they plan to get back in the studio to record their fifth full-length album, Soul Survivor.

Shadowlands continues their “residency” at Steynberg Gallery, playing a dinner show this Saturday, Feb. 22 (7 p.m.; $20; call 547-0278 for reservations). This continuously evolving ethereal folk quartet is currently working with local photographer Barry Goyette so they can take the world by storm. “We spent yesterday crawling around remote forested coastal terrain while Barry took photos and video, but [we] probably won’t have the results until next month’s show,” said cellist Bob Liepman. “We came home after the shoot and worked on a new song about the drought. It will likely open the show on Saturday.” They recently launched their website: shadowlandscalifornia.com. Dinner will be Peter Steynberg’s house-made curry. A vegetarian option is available. Not hungry? Come anyway for music only for $12 if space permits. Beer, wine, and café drinks are available by separate purchase.

Ventura-based Cameron Ray plays Saturday, Feb. 22, from 8 to 9:30 p.m. at Kreuzberg. The singer-songwriter’s music is influenced by rock, blues, folk, and country. In other words, he’s constantly exploring a variety of genres, taking “a carefree, almost reckless approach to songwriting,” according to his press materials. Ray is joined on stage by Stephen Nellis on bass and Daryell Perkins on drums and percussion.

San Fernando Valley Murder Revue plays Frog and Peach this Saturday, Feb. 22, performing country rock and outlaw country music. They “strive to bring the murder ballad art form to the fore while paying homage to many of the great country artists of the past,” according to their bio. “Original song ‘Rings in the River’ is a story of spousal betrayal that leads to the demise of both parties involved, while ‘Gut Shot’ and ‘.44 Special’ weave a tangled web of revenge that spans three generations of fathers and sons.” They also cover classics such as “Delia’s Gone,” “Knoxville Girl,” “Mama Tried,” and “Honky Tonk Heroes.” The show starts at 10 p.m.

“I tour the West Coast often, solo and with my band The Wayward Ones (it’s a funky roots rock band, based out of L.A.),” Rob Larkin explained. “I’ve been starting to play a lot in SLO County, especially wineries around Paso Robles. This week, Paso Robles let us know that they chose The Wayward Ones for one of the 2014 Concerts In The Park, and I’m definitely looking forward to that.” Larkin will be playing some solo shows this week: Monday, Feb. 24, at Bon Temps Creole Café for an installment Songwriters At Play singer-songwriter showcase (6:30 p.m.; all ages; free); Wednesday, Feb. 26, at Linnaea’s Café (7 p.m.; all ages free); and Thursday, Feb. 27, during Farmers Market near Broad Street (6 p.m.). Expect a homespun blend of Americana, roots rock, and soul.