Emails From Paris, an exhibition of encaustic paintings and sculptures by artist S. Kay Burnett, will be on display at the SLO Museum of Art through March 31. Burnett will also give a talk during Art at High Noon on March 7. Visit sloma.org for more information.

She was all alone in a strange, foreign city, with nothing but a new email address and a rickety DSL connection. So S. Kay Burnett wrote, a lot.

The year was 1996, email was relatively new to the world, and the city of Paris was brand new to Burnett, who was in France working for a tech firm doing online documentation for six months. It would be about another 11 years before Burnett started painting. It was during her time in Paris, traipsing about the Louvre and the Musee d'Orsay, that a love of art was sparked in her, and what began as a slow burn would become a roaring fire. Burnett's artistic renderings of her time in France, including encaustic paintings and sculptures, are currently on display as the Emails From Paris exhibit at the San Luis Obispo Museum of Art. 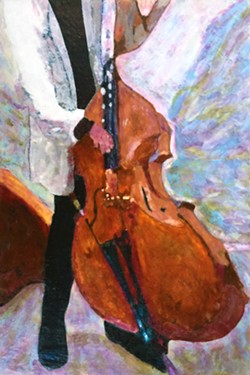 Particularly during her early days in Paris, Burnett didn't know a lot of people, and she got lonely. So she would write emails to friends and family back home about sightseeing or what it was like to be an expat living abroad. While Burnett didn't paint during this time, she did take a lot of photos, which would become the basis for her paintings of Paris years later.

Burnett's style is colorful, whimsical, and a little bit abstract. Her paintings are just out of focus enough to give them a dreamlike quality, much like the impressionist painters who Burnett first fell in love with all of those years ago.

Her piece Toy Boats captures the joy of children playing with makeshift sailboats. The painting To The Beat of the Bass takes Burnett back to her last free Sunday when she was living in Paris, soaking up the music playing at a local market.

"It was my last Sunday alone," Burnett said. "I went to the market, and there was this band playing, and it was as if the market was alive and there were all these smells. It was just kind of a magic moment for me." And Lunch at Musee d'Orsay shows the iconic clock window at the fine art museum where Burnett would grab lunch at a café after perusing impressionist paintings.

When local art aficionados spend time with Burnett's encaustic paintings and sculptures that make up Emails From Paris, she hopes that it inspires them to maybe take a risk or two in their own lives.

"I'm hoping that it makes them remember some of their memories, or encourages them to have an adventure, to do something they've always dreamed about doing," she said. Δ

Arts Writer Ryah Cooley loves Paris in the fall. Contact her at rcooley@newtimesslo.com.