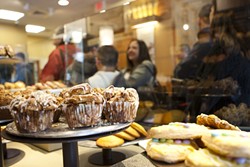 Walking up to Panera Bakery and Café on a Wednesday at 2 p.m. and finding the place packed, both inside and outside, was rather shocking—it had barely been open one week. It was only a couple of weeks earlier when I first noticed the sign on the building alongside Madonna Road announcing Panera’s imminent opening. I was glad to see it because I tried Panera Bread five years earlier while visiting Nashville, and I loved the artisan breads. After dining at the new SLO Panera, it occurred to me that it offers everything that’s crucial for a restaurant to survive in the current economy: good quality foods and beverages; value prices; prompt service; and a friendly, comfortable atmosphere. Its convenient location and easy parking doesn’t hurt a bit; it all adds up to a formula that’s sure to succeed.

Obviously, Panera can’t offer the same artisan foods you’d get dining with a local in-house chef running his or her own restaurant. But this chain eatery consistently delivers value, quality, and speedy service. You can dine inside or alfresco, they have Wi-Fi, and it’s convenient for picking up orders to go. Whether you order in or to go, the kitchen team gets orders out in five minutes or less. Although some of the foods, like soups and meats, are pre-made in a central commissary in Southern California, the breads, bagels, and pastries are baked fresh at the café nightly. All of the menu and bakery goods are created by Panera’s chefs, both of whom were formerly associate deans at the prestigious Culinary Institute of America in Hyde Park, N.Y.: Dan Kish, executive chef, and Tom Gumpel, baker and pastry chef. The chain, which includes the brands Saint Louis Bread (the original site) and Paradise Bakery & Café, had 1,453 cafés open by the end of 2010. They opened a Panera in Santa Maria, followed by one in SLO this year, and another is still being built in Santa Barbara, according to Meg Davis, an enthusiastic young woman who’s Panera’s district training specialist.

“No sandwich, salad, or entrée is pre-made,” Davis said while leading a tour of the café. She provided a detailed explanation for every question I asked of her. “Everything we serve is made fresh daily. We never serve left-over foods to our customers. At the end of the evening, everything left on the shelves is donated to the SLO Food Bank.” Davis noted that Panera supports community services wherever they open.

Judging by the number of people there to try out this new bakery and café, it was clear many also knew of Panera. It was amazing to learn that the SLO Panera started out with 75 employees—and they need more help. Davis said they plan to hire additional employees soon to keep up with the demand at this popular location. I was quick to visit because of my Nashville experience, but I learned much more about it my first visit here.

“People think we’re just a bakery, but I want them to know Panera Bakery and Café offers so much more,” Davis said. “We’re in control of our coffee from the bean to the cup; our roasting plants are committed to providing a good cup of coffee.”

Rare anywhere these days, coffee refills are complimentary. I was skeptical, but the coffee tasted much better than many cups I’ve had elsewhere.

“We have a full-time barista, and I want people to know we can make any specialty coffee drink they can imagine,” Davis said.

Smoothies are also made to order, using organic Stonyfield yogurt. I ordered wild berry, but, unknowingly, was given strawberry. By the time I sat at a table, an employee appeared with the correct smoothie, apologizing for the mistake. She said I could enjoy both. Talk about service; admitting such a mistake is a rare occurrence in any eatery. The smoothies seemed the ultimate milkshake: They taste decadent, but they’re also good for you. 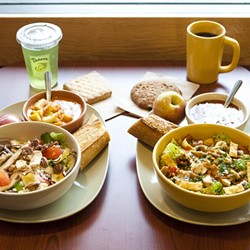 Davis was particularly pleased about their “signature sandwiches,” with combos like the bacon turkey bravo on thickly sliced tomato basil bread. It was good, but I was far more impressed by the signature salad: Thai chopped chicken salad with romaine, cashews, fire-roasted edamame, red peppers, carrots, cilantro, and toasted wonton strips dressed with a Thai chili vinaigrette and peanut sauce. It had the perfect degree of kick, neither too hot nor too mild. If you want the salad without the heat, you can choose another one of the interesting vinaigrettes offered. In fact, Davis said they do their best to accommodate everyone: “Whether you want to substitute tofu for meat, prefer another bread choice, or ask us to hold the onions or the cheese, we will do whatever we can to make it right for you.”

During the media opening on March 4, NFL football legend Keyshawn Johnson showed up and made a child’s wish come true with the Make-A-Wish Foundation of the Tri-Counties. Johnson is an executive officer of First Picks Management, the company that owns Panera Bread. Johnson presented a SLO 11-year-old named Tyler, who has the life-threatening condition neuroblastoma (extracranial solid cancer), with his wish-come-true of a Disney cruise to the Bahamas with his family. Davis recalled there was hardly a dry eye in the house.

For the event, Panera partnered with 805 Living, and Eberle Winery which donated their wines for the occasion, but Panera doesn’t sell alcoholic beverages. Neither do they accept tips, which means they pay their staff better to make up for it.

“Instead of tip boxes, we have donation boxes for spare change,” Davis pointed out. “Everything that goes into it is matched by the company and donated to the Make-A-Wish Foundation of the Tri-Counties (SLO, SBC, and Ventura).”

She finished: “It’s not just about quick service. You can sit down for a good dinner with your family and only spend $8 a person.”