Emmy-winning actor Jeff Daniels shows off his musical side on Nov. 4 at the SLOPAC

Emmy-winning actor Jeff Daniels has made a lot of great movies. After getting his start in Ragtime, he went on to a supporting role in Terms of Endearment before scoring the lead in Woody Allen’s The Purple Rose of Cairo. Then it was Heartburn, then the cult classic Something Wild with Melanie Griffith. He became familiar with the Central Coast when he starred in Arachnophobia, which was partly filmed in Cambria. Gettysburg, Speed, Dumb & Dumber, Pleasantville, Blood Work, The Hours, The Squid and the Whale, Infamous, Looper, as well as two films currently in theaters, Steve Jobs and The Martian—he seems to be everywhere, a familiar face and voice, sort of like one of the family. And now he’s coming here to the Performing Arts Center, not to act, but to sing and play with his son’s band, The Ben Daniels Band, on Wednesday, Nov. 4 (7:30 p.m.; $22.40 to $48; call 756-4849 go online to www.calpolyarts.org). 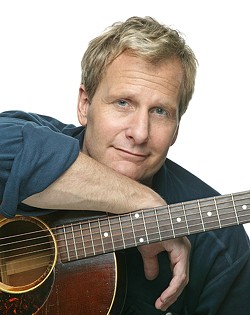 It’s not exactly a secret, but Daniels has been a lifelong musician whose acting career essentially eclipsed his musical aspirations, but he’s been writing songs for decades and recently released his sixth album, Days Like These. His first album and musical performance was a fundraiser for The Purple Rose Theatre, a not-for-profit professional company Daniels founded in his hometown, Chelsea, Mich. In the dozen years since then, he’s been on several national tours and shared the stage with Lyle Lovett, John Hiatt, and Keb’ Mo’. Daniels spoke to New Times by phone.

New Times You married your high school sweetheart in 1979 and are still married with three kids. You live in Michigan, the state you grew up in. You haven’t been arrested or gone to rehab. For a big Hollywood star, you seem to be doing it all wrong.

Jeff Daniels Yeah, why do I have a career? Usually those things are required, or so it seems. One reason we moved back to the Midwest is because we felt we couldn’t raise our kids in New York or L.A. We wanted to go back to a place we understood. I didn’t want to raise them in the business, which L.A. would have been to me. Instead we raised them outside the business but would still sometimes bring them to film sets. I was glad they got to experience both worlds but grew up in a more normal way.

New Times You were a stage actor before you became a movie star, so you know the rewards of performing before a live audience. Is that why you do music, or is there something more?

Jeff Daniels There is that allure of a live audience, and it’s certainly something I’ve known how to do since high school, where I did musicals and plays. I was never the sort of person to have stage fright, so I enjoy being on stage. When you do plays, you’re at the mercy of people who write plays and produce plays, at the mercy of Broadway. With music, I’m in control. I’m the producer and director, the writer—everything. All you’ve got to do is book the gigs and get out there on stage again. When I’m playing music, I’m playing my own material, which means I have all the responsibility, all the blame if it goes wrong, all the glory if it goes right. And I like to have creative control and freedom to create.

New Times You’re a playwright, and you’ve also written a lot of songs, like 400 or so. Are your songs mostly autobiographical or do you create characters and put them in situations?

Jeff Daniels A little bit of both. I’ve been very influenced by the playwrights I would see around New York, watching someone like Langford Wilson work for instance. I instantly became fascinated by what they were doing and how they were doing it. When I would watch Woody Allen re-write a scene after one take, I wanted to figure out why, what he saw, what he wanted to improve. As far as the songs go, most of them were never intended to be played out. I wanted to know how to write a song, and so I practiced. Probably the first 150 are terrible, sort of like singing from your journal. Every once in a while you write something that strikes on a universal truth.

New Times A lot of your songs are rife with humor, but some of them are incredibly poignant. It sort of feels like the musical equivalent of the rope-a-dope—clowning around in the corner before you knock them out with a big tearjerker. Is that your strategy?

Jeff Daniels I’ve never heard it put that way but yeah, rope-a-dope is a good. You fake left and go right. Storytelling should be unpredictable, and you don’t want to lose your audience. You get them at 8 p.m., and you don’t want to let them go until you’re ready to. I do a variety of styles—blues to jazz to bluegrass—changing tempos and changing keys, and I might do two or three in a row and then throw in a funny song, and come back with something really tender and it kills. It stops the show. That’s what you want and it’s what they want—to be moved in a way they haven’t been moved for a while. All I need is for the audience to go with me, to let go and let me guide them a little bit.

New Times I’m sure your fame as an actor is part of your draw when you’re touring as a singer-songwriter. Are audiences surprised to discover you’re actually a very talented singer and guitar player?

Jeff Daniels Thank you. And oh yeah, absolutely that’s part of my draw, and we play right into that. We don’t ignore the elephant in the room. Some people may be there because they like The Newsroom or Dumb & Dumber, so expectations can be pretty low. If I spent 40 years being an actor it means I didn’t spend 40 years being in music, so how can I possibly be any good? No, we play right into that. I’ve walked out solo and almost gone Andy Kaufman on them, moving from the key of E into a high F, fumbling around trying to find the right note, and I’ll string them along for 30 seconds and it just scares them, and then I’ll drop it down into E and I’ve got it and suddenly they know I’m in control and I’ve been playing them.

New Times When you come to SLO, you’ll be backed by your son Ben’s band. How is it working with family?

Jeff Daniels Oh, it’s good. I get to be the frontman to a great band, and my other son Lucas is the tour manager, so he’s the boss. It’s all pretty loose, being on the road, but these guys are all pros. They’re on time and ready to go. This is our fourth tour together, and they’ve become collaborators, helping to arrange songs. I learned this out of theater: I might have some ideas, but I know they’re limited, so I ask them, what do you guys hear? What are your thoughts? They’re all great musicians, and I want their ideas. It empowers them, and they’re invested in putting on a great show. It’s worked out great.

New Times Your songwriting has been compared to the likes of John Prine. Personally, I’d find the comparison terrifying. How about you?

Jeff Daniels No, I’m more honored because Prine and Steve Goodman, Lyle Lovett, John Hiatt, Keb’ Mo’—these are influences whose songs and lyrics I studied. I didn’t steal; I studied. Ben’s done the same thing. When he said he was interested in music, I said, OK, here’s Chronicles by Bob Dylan. Here’s No Direction Home by Martin Scorsese; watch this. I took him to Clarksdale, Mississippi, to the crossroads, to Robert Johnson’s grave. I told him to learn this stuff, to go to school on it. It’s what you do if you want to get good. I’ve been influenced by so many great artists, and it’s a great honor to be mentioned in the same sentence as Prine.

New Times Did I miss anything?

Jeff Daniels The whole father-son thing is a bit of a reoccurring theme. We play some songs together, one that I wrote for him when he was 3 years old. I get to stand on stage all these years later and play with my son. That’s pretty special. 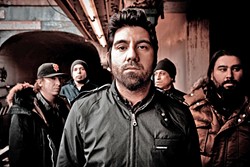 Deftones are a Grammy-winning, multiplatinum-selling act that delivers “songs defined by churning, double-fisted aggression while also testing the boundaries of music by incorporating elements of psychedelia and shoegaze.” Their seventh album, Koi No Yokan, led to an Album of the Year award at the Revolver Golden Gods Awards. They’re currently in the studio working on their eighth record to be released this year.

Plague Vendor is a Whittier-based act “centered on a predilection for dark tones and instinctual playing.”

Mosh it up, metalheads! 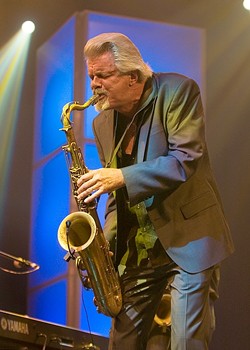 The SLO Blues Society is bringing the Terry Hanck Band to the SLO Vets Hall this Saturday, Oct. 31, for a big blues Halloween hoedown (8 p.m.; 21-and-older; $25 at the door or at Boo Boo’s and Cheap Thrills in advance). Dress up for the costume contest with prizes such as blues CDs, show passes, and SLO Blues Society clothing!

Hanck is a monster tenor sax player with an impressive vocal range, delivering everything from ’50s swing, ’60s R&B, ’70s soul, and ’80s Southern blues rock. Born to a bandleader father in Chicago, he was raised on the Windy City’s diverse blues, jazz, and soul sounds. In 1965, he headed west and by the ’70s he was touring with Elvin Bishop, who calls Hanck “a fine vocalist, an amazing showman, and my favorite sax player.”

By the ’90s, Hanck was a frontman, and he currently tours with Johnny “Cat” Soubrand on guitar, Tim Wagar on bass, and Butch Cousins on drums, and for the SLO show, he’ll be joined by Robert Cray Band keyboardist Jimmy Pugh. Hanck’s most recent album is Gotta Bring It On Home To You (Delta Groove, 2014), a tribute to the soul rocking blues of the 1950s and ’60s. Deep Blue will open the show. 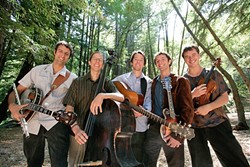 Numbskull and Good Medicine Presents have a trio of SLO Brew shows lined up for you this week, the most tasty of which is Hot Buttered Rum on Wednesday, Nov. 4 (7:30 p.m.; 21-and-older; $15 presale or $17 at the door). The Bay Area act started as an acoustic string band but has evolved into a plugged-in, percussive powerhouse whose most recent release is Limbs Akimbo, featuring “smart, soulful lyrics with West-African guitar and bell patterns, a bubbling mandolin, and a three-piece horn section.”