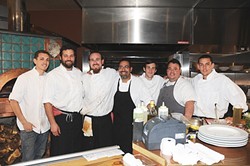 I asked chef Brian Collins, the owner and genius behind the exciting new restaurant, Ember, to describe his impressively fresh cuisine. He explained it’s farmers market driven, inspired by France and Spain. Collins is a professional with an innate talent for creating dishes. Nearly everything comes into his kitchen from this region’s most renowned farms, many of which are organic or sustainably farmed. I thoroughly enjoyed dinner there seven nights over the two months this fine dining establishment in Arroyo Grande has been open. And I envision many more brilliant menus to come from this inspired chef.

Ember is the best new addition to happen to the food scene in the Five Cities in many years. The fact that this casual eatery is packed nightly tells of the respect Collins rapidly earned in the town where he was born and raised. But rather than wax poetic over this passionate chef, let me tell you of his respect for his cooking team, the farmers who support him, and the impressive qualities that make this casual eatery a five-star dining experience.

Collins explained that his utmost goal was to build a team of cooks who are creative individuals who love food: “I want to hire people who are future sous chefs and executive chefs. While working at Chez Panisse in Berkeley, I learned that it takes years to build a network of cooks and purveyors. It’s really inspiring to cook with people who are passionate about food. At Chez Panisse it started at the top with Alice Waters.”

Like Alice, Collins inspires the team at Ember in creative cooking showcasing the freshest foods of the season. He recalled how much he enjoyed his three-plus-years at his last job, as chef at Full of Life Flatbread in Los Alamos. It was the closest experience to working with Waters where everyone on staff was part of her family. He has recreated that family work ethic at Ember. The Ember A-Team, as pictured above in the photo, includes: Brian Claiborne, executive chef Collins, sous chef David Marks, Adam Aguillon, pastry chef Matt Molacek, Treaver Lynch, and David Kullman. Each one of the cooks was hand-selected by Collins because they met his extremely high standards.

“I’m trying to keep it consistent five nights a week and do it well. Chez Panisse was the foundation for building my awesome cooking team. I want the staff to learn from me and I’m learning from them.”

While interviewing Collins, local farmer Jerry Rutiz of Rutiz Family Farms stopped in to discuss his sustainably farmed seasonal produce. Collins noted that he has a network of farmers from whom he buys specific products. He supplements additional pantry needs at the local farmers markets. “At Chez Panisse it took 25 years to build a network of purveyors,” Collins noted. “I like buying at the farmers markets. It’s so much better when you can personally select what you’re going to be cooking. When I create dishes, I want the best vegetables of the season on the plate.”

Collins once told me candidly that his best dishes are starters and shared courses, which shows in his menus that change every month, divided by salad and soup, share, oven, coals, and sweet. “Starters are my strong point, I’d like to offer more of them and less entrées,” Collins said frankly in late spring of 2011, after being chosen by Lido’s original executive chef Evan Treadwell. He believed Collins was the ideal person to replace him at Lido. Collins’ philosophy is crystal clear on his menus at Ember, which offer six selections of shared plates, and eight pizza choices.

Collins is right, and all of his starter and shared courses shine compared to most other restaurants. I’ve loved nearly every dish, and that is indeed a rarity. The chef can’t take the prosciutto wrapped artichoke with burrata mozzarella ($8) off the menu, and it’s too delicious to share. The bacon-wrapped scallops with Meyer lemon butter, and sage and kohlrabi slaw ($18) amazed us. We also loved the wood fired squid with cannellini beans, aioli, and toasted bread crumbs ($10). My favorite was the irresistible green garlic ravioli with wild and king trumpet mushrooms ($14).

I crave Ember’s pizzas (prices ranged from $15 to $17 in March). The organic pizza dough, made daily by Molacek, is exceptional. I’ve found that’s true whether I’m enjoying it fresh from the red-oak-fired pizza oven at Ember, or reheated in my toaster oven the following day. My favorite pizzas are the excellent pepperoni; the prosciutto and arugula over three cheeses and herbs; and the chorizo with gold potatoes, jalapeños,  and tomatillo salsa, but I haven’t tried  them all yet.

There are four entrees, and I rave to everyone about the excellent Mary’s Farm chicken cooked under a brick ($22) with grilled polenta and seasonal vegetables. My unexpected favorite, however, was the ethereal wood-fired duck lasagna ($22); it’s so unexpected.

My husband, Dan, loves the swordfish special of the day. The only reason I don’t is because I don’t like meaty fish; I can’t wait for the local wild salmon season. The crusty levain bread, baked fresh daily by Molacek, is hands-down my favorite loaf around. It’s like Acme’s levain made in Berkeley, which has always supplied Chez Panisse. Although it seems pricey at $10 a loaf, the two-and-a-half pound crusty levain is totally addictive. Many locals show up when Ember opens at 4 p.m. to buy that freshly baked bread to eat at home.

Another rare quality about the ardent Collins is the fact that he would never charge high prices, although he could get away with it. “I want to keep the prices as fair as I can, and want people to think it’s a good value,” Collins pointed out. “I want Ember to be accessible to families and provide good quality foods.”