One school's plans show the new reality for California education 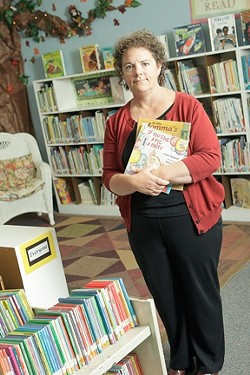 There’s nothing remarkable about the library at Grover Beach Elementary School. It’s just one portable building in a line of portable buildings. The carpet inside is stretched over a hollow floor that thuds under the lightest footstep. There aren’t many books, just enough to line three shelves taped with handmade labels on small scraps of paper.

Yet last year, when school librarian Piper Adelman arrived to open the library, there typically was a line of six students waiting to get in.

Things will be different this year: There may be a line in the morning; they just won’t be getting inside.

“I’m looking forward to this next year,” Adelman said, “but I think it’s going to be … it will prove challenging.”

Last year, the library was open six hours a day. It’s a hub for students. They usually gather there—sometimes 20 at a time—before and after school and during recess. Adelman’s job was cut to four hours per day for this year. Though it’s not a huge reduction, she won’t be there in the morning anymore.

Truncated library time at Grover Beach Elementary is just one concrete example of the many ways area schools will be noticeably different this school year, thanks to the budget.

Eleven teachers at Grover lost their jobs, and many of them were just beginning their teaching careers. Three classrooms previously filled with kindergarteners, third-graders, and fourth-graders will be empty this year. In response to layoffs the average class size will jump from about 18 to 20 students per teacher, to almost 30.

Juan Olivarria is a 34-year veteran with the Lucia Mar Unified School District. He became the new Grover Elementary principal last year. Toward the end of his first year he had to tell the 11 teachers they wouldn’t be returning.

“It was one of my saddest days because these are great teachers—great people—and I had to say, ‘I’m sorry, you will not have this job next year,’” he said.

It was clear Olivarria didn’t like talking about the layoffs, or any cuts for that matter. He looks and behaves like an archetype of a principal, a tall man with neatly combed hair who has a calmness about him. But Olivarria winced when he spoke about the cuts he’s had to make. He took every opportunity to steer the conversation toward the positives: how the community has shown its support and the comradery that developed among the staff.

After all, there isn’t much good news lately.

“We have no choice,” Grover Elementary third-grade teacher Nancy Shannon said. “We have to keep the rigor up and we have to work hard to make it happen. And I think that most teachers have that attitude; you wouldn’t teach if you didn’t.”

This year’s state budget fell into deficit shortly after it was passed. After an excruciatingly long process in Sacramento, the Legislature patched its budget with $6 billion in additional cuts to education.

In SLO County, that equated to at least $25 million—about $20,000 to $25,000 lost per classroom. There have been 200 layoffs countywide, with about 90 of those positions cut from the Lucia Mar district. Before a budget was passed there was hope some teachers would be hired back, County Superintendent of Schools Julian Crocker said, but now such hopes are more of a pipe dream.

• Grover Beach Elementary cut an arts program that brought local artists to classrooms about once per month. Field trips and assemblies are also likely to be cut.

• Some districts have either cut sports programs and extracurricular activities or are charging students to participate.

“There’s going to be a lot of question marks,” Olivarria said. “Are we going to be able to keep those things that make school fun?” Grover Elementary also had to cut staff in its new computer lab. “So we have a wonderful computer lab with no lab tech in there.”

Bottom line: The things meant to keep education from becoming too monotonous are all but gone. One of the most obvious changes will be the larger class size. Shannon will have about 10 more students this year compared to last. For her, that’s less one-on-one time with her students.

“We do individual teaching,” she boasted. “We don’t do the old format of getting up and trying to teach the whole class [at once].” Shannon was confident she’d get the job done this year, but acknowledged it’s going to be harder with more students.

There will be other, less noticeable cuts, too. Crocker said there’s less money for training and planning time, “but people don’t see that very much, at least initially.”

Then there are the cuts you can’t paste a dollar sign on. Although many of the students at Grover Elementary are too young to understand the financial hardships, they’ll know something’s wrong when their favorite teacher is missing, Olivarria said.

It can be just as emotional for the teachers who had to leave.

“To think that you’re not going to be there to watch them grow up is hard on the teachers,” Shannon said.

The flurry of cuts has subsided for now. If last year was a hurricane, those who survived the cuts speak as if they’re now in the eye of the storm, hoping it will change course and spare them further damage.

“Wow, if we have to do that again next year, what are we going to cut?” Olivarria said. “What do we have left to cut?” ∆