A defunct chicken farm north of Nipomo has become a hothouse of controversy that's seen a fire official's safety-related code ruling escalate to an outright battle for use of the property. 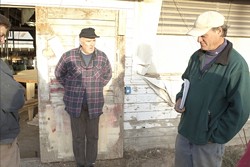 # The coops on the property are now used for activities like storage, recycling, or growing mushrooms, and it's been that way for more than a decade. But now a dozen or so tenants, who rent the property for a variety of uses, have been ordered to leave by May 1. And some residents are wondering if the evictions are procedural or personal.

The farm was raided in December of 2007 by more than 30 specially trained officers. They came armed with a variety of weapons and a fire-inspection warrant.

Some of the tenants described the raid as something like Marshall law they claim they were intimidated with guns while buildings were searched. Fire officials first defended the tactics, and later denied that any guns were displayed.

At that time, all of the tenants were given two months to vacate the property. Many scattered, but about a dozen wanted to remain until the buildings are torn down. Tenants had appeared before the county Board of Supervisors in 2006 to ask that their unconventional use of the coops be grandfathered in, even as zoning changed to allow development on the property. The group was given permission to stay.

Almost a year later, a small fire on the property drew the fire department to the property, and the raid followed.

Andy Anderson, a Cal Fire battalion chief, investigator, and law enforcement officer, staunchly insists that the buildings are not up to code and pose an immediate danger to human life.

Yet two businesses, a furniture builder and mushroom grower, which were explicitly named during the 2006 board meeting, have been allowed to stay, provided they get their buildings up to code. The rest of the businesses operating on the property don't have that option.

A group of tenants recently met with Supervisor Katcho Achadjian, who said he views all the businesses as a package deal--in other words, if one can stay while getting up to code, the rest should be able to as well.

Property owner Henri DeGroot told Andersen not to come back without a warrant, after tenants complained of being harassed.

But Andersen took the challenge and served a second warrant on April 7. A new round of eviction notices quickly followed. Andersen said that tenants, excluding the two, would be cited if they're still around after May 1.

DeGroot, who is 70 years old and has owned the property for a decade, said that he's thinking about selling it because of the hassle. Most of the tenants and DeGroot worry that if they make too much more noise, they could face punishment. Achadjian said that he plans to tour the property before the eviction deadline to see what can be worked out with fire officials.