Until I saw Cuesta drama instructor bree valle’s latest production, I’d forgotten how funny Alexandre Dumas’ The Three Musketeers can be. Even when they’re completely surrounded by Cardinal Richilieu’s guards, about to be ruthlessly skewered, Athos, Porthos, Aramis, and d’Artagnan still manage to deliver some of literature’s most valiant and grandiose one-liners.

“Come at me, varmints!” snarls Porthos, played by Aleksander Hewitt, brandishing a knife and a dagger. “I’ll cut off your heads and roast them for my suppaahh!!”

Dumas doesn’t half-ass anything. Neither does valle, whose ambitious productions tend to involve enormous casts, opulent wardrobes, stunning visual effects, and some other extremely challenging variable. Last year’s production, Rent, was a physically demanding four-hour rock opera that required near-nonstop singing. This year’s Three Musketeers requires no less than nine fight sequences—most of them with swords. And it’s going to be awesome.

Three Musketeers opens as Dumas, played by Martin Young, is seated as his desk, quill in hand, at the upper left corner of the stage. His rather removed narration—it’s 1625 in Paris, and everyone is battling everyone, basically—is contrasted with the sharp immediacy of the Musketeer Academy warming up for its morning drill. As Captain de Tréville, played by Greg Threlkind, recites “The Paradoxes of Defense,” (“The exercising of weapons puts away aches and griefs and diseases; it increases strength and sharpens the wits. It gives a man perfect judgment, it expels melancholy, choleric, and evil conceits … .”) his musketeers move through their rigorous fencing exercises.

It’s into this world that the young, eager, provincial d’Artagnan (Austin Whitford) enters, carrying only his father’s sword and his foolhardy dreams of entering the ranks of the musketeers. 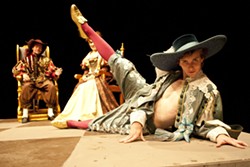 “It is my destiny!” he announces to an unimpressed Captain de Tréville, a bit too enthusiastically.

But Tréville, having greatly respected the boy’s father, takes a chance on the young d’Artagnan, who gleefully bounds from Tréville’s office, letter of recommendation in hand, and runs smack into the wounded shoulder of Athos (Eric Atwood). It’s neither the first nor the last time d’Artagnan, in his eagerness, is challenged to a duel by one of the three musketeers. But the duel is intercepted before it can take place. The Count de Rochefort (played by Philip Valle), his right hand man Jussac (Cooper Wise), and their guards threaten to arrest d’Artagnan and the musketeers for dueling in the streets. After d’Artagnan jumps in to assist Athos, Porthos, and Aramis (Chris Kamas) in some serious ass-kicking, the musketeers reconsider their previous judgments of this hapless country bumpkin with a heart of gold and some unexpected swordsmanship skills.

“Violence moves the plot forward,” explained David Barker, the fight choreographer hired to work with the cast. “It really is a vital part.”

(Barker, who teaches stage combat at the University of Arizona, flew out to California three times over the course of the rehearsal process to work with the cast on the show’s many combat scenes.)

Thus d’Artagnan is initiated into the danger, intrigue, and adventure of a musketeer’s life. He falls in love with the queen’s dressmaker, Constance Bonacieux (Mary Karrigan), who is unfortunately married to his landlord.

Meanwhile, in the King’s Court, the sinister top villain Cardinal Richilieu (played deliciously by Jeremy Ketzel) to whom Rochefort reports, is basically running the country, through the all-too-easy manipulation of King Louis XIII. Nik Johnson, as the effeminate, inbred royal, is flouncing, foppish, and floppy, his portrayal dipping into the territory of Monty Python and Little Britain. He is beyond ridiculous. You will probably wet your pants. At the King’s side is the serene, unruffled Queen Anne (Fatima Safaverdi) who holds beneath her calm, regal demeanor a trove of secrets involving a certain Duke of Buckingham (John Green). The Cardinal finds another secret ally in Milady de Winter (Kate Sachen), an overtly conniving seductress.

There is so much major talent to be found in minor roles—such as Paul Whip’s portrayal of the Count de Wardes as a sissy oddball—that it’s impossible to commend each performer by name. The show is positively brimming with them. Then there’s Dumas’ colorful wordplay, which ascends to near-Shakespearean heights. And those fabulous costumes, culled from the Oregon Shakespeare Festival—incidentally the event for which this adaptation was written. And it’s funny!

“This rousing adaptation of Dumas’ epic story has the right ingredients: sword play, villains, and plot twists,” said valle, who, in case you haven’t noticed, eschews capitalization in the manner of e. e. cummings. “But above all, it made me laugh.”

Above all, Arts Editor Anna Weltner can be reached at aweltner@newtimesslo.com.