The silent half of the Pendragons talks to New Times 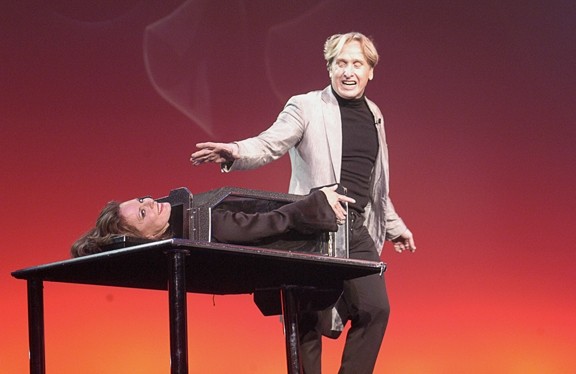 New Times How did you meet?

Pendragon We met swimming, at UC Irvine. I thought he said he was a “musician” but when I saw his apartment he had all this strange stuff including a straitjacket. Then I realized he was a magician. He did, then I tried it. Three days later we were engaged.

New Times How did you end up in a show together?

Pendragon At a Renaissance fair, we were street performers and that is how we really started; on the streets ... in 1976. A lot of our material we did then, we still have in our show today. It is very one-on-one entertainment, and you had to be good or your audience would walk away.

New Times What can we expect from your show at the Clark Center on Friday?

Pendragon The show is an hour and a half with an intermission. Magic is universal, everyone will enjoy it—from kids to grandmas. All languages. It’s theater and we approach it as theater—art and acting, comedy, dance—it is all included in our performance. There is an amazing illusion. …

New Times Oh yes, I heard about this. You were in the 50th anniversary edition of the Guinness Book of World Records for a split-second illusion, Metamorphosis—the fastest transformation illusion in the world. Describe!

Pendragon Houdini first started performing it ... but it may have existed before him, but I’m not sure … I place Jonathan in a locked box/trunk and I climb on top with just a cloth in front of me … In a blink of an eye, a half a second, I change into Jonathan.

New Times Wow. What is Jonathan like on stage?

Pendragon Jonathan does most of the speaking. It’s like he’s in your living room. We take away that theatrical invisible curtain between the stage and the audience. We do a meet and greet after the show as well.

New Times So what is your role? Are you a magician’s assistant?

Pendragon We are partners, just like Penn and Teller. I don’t talk, not much anyway. Jonathan is Mr. Personality. His range is wonderful, from comedy to Shakespeare. It’s not boring, it is a lot of fun.

New Times Your background is in dance and physical fitness.

Pendragon I grew up dancing, so performing physical feats isn’t new to me, it is a part of me. I don’t use the mirrors, flashlights, and glitzy costumes of previous decades in this profession. It was a radical change to become partners, equal with Jonathan. I got rid of glitter and rhinestones, even the shoes .

Pendragon I do a mental piece. We are mentalists as well. I paint an audience member’s feeling or word … empathy or a letter pattern … and nine times out of 10 I nail what they’re thinking. I don’t know how I do it.

New Times You’ve performed for presidents, dignitaries, and royalty and regular folks. Which was the most memorable show for you?

Pendragon Probably the show for the President and Hillary Clinton. They had a spotlight on them and they were very close to the stage. You have to react to them. Normally you don’t see the audience, you just sense them and their energy. It was so distracting, but they had a good time.

New Times I heard Jonathan was shot in the heart with an arrow? Is he OK?

Pendragon The arrow went completely through his heart. He is a member of the archery club and was rehearsing an illusion … it’s a miracle he’s alive. That is magic in and of itself.

Christy Heron has been to the Magic Castle in Hollywood and lived to tell about it. Chop her in half at cheron@newtimesslo.com.