End of an era? Vote to ban off-roading in the Oceano Dunes brings hope for stability in neighboring communities

The final moments of a nearly 12-hour California Coastal Commission meeting on March 18—where commissioners voted to eliminate off-roading and most other vehicle access in the Oceano Dunes within the next three years—were crushing for the SLO County and California residents who've long spent their weekends and family vacations zipping around the dunes.

It was a long-awaited moment of relief and celebration for many others, who have argued for years that off-roading in the Oceano Dunes State Vehicular Recreation Area (SVRA) disrupts sensitive habitats, culturally important lands, and negatively impacts the economic vitality and health of neighboring communities.

For South County Chambers of Commerce President and CEO Jocelyn Brennan, the decision felt bittersweet. It puts an end to a decades-old tradition in SLO County, a unique pastime that has garnered love and adoration from those near and far and brought much-needed revenue to Oceano for generations. It's an activity that, in all of California, is only really offered here.

But while Brennan said she's concerned and sad for the South County business owners who depend on off-roading tourists to stay afloat, she's simultaneously relieved to see the 40-year battle over vehicle access in the dunes laid to rest. It's an opportunity, finally, for everyone to move on. Rebuild. Heal.

"I feel like it's been hard for the businesses to have this hanging over their heads for so long," Brennan told New Times. "Now we know what we're dealing with, and we just have to figure it out."

The historic Coastal Commission decision still allows for street-legal vehicles and some night driving on the beach between West Grand and Pier avenues, where up to 500 drive-up campsites can continue to operate indefinitely.

The Coastal Commission also voted to close the park's Pier Avenue entrance, but extended the closure deadline from July 1 of this year to July 1, 2022.

Though commissioners said they were moved by the many comments they heard from off-highway vehicle (OHV) enthusiasts vehemently opposed to the ban, all agreed that OHV use in the Oceano Dunes is not consistent with the Coastal Act or the park's designation as an Environmentally Sensitive Habitat Area.

"It's clear how impacts occurring at the park are having a disproportionate impact on adjacent and downwind underserved communities," Commissioner Linda Escalante said at the meeting. "It is clear that Oceano, Nipomo, Guadalupe, and Santa Maria qualify as [environmental justice] communities that are experiencing these adverse effects of pollution. And it is clear that prohibiting those activities would reduce or eliminate the environmental burden on these communities."

It's not the conclusion that some business owners and residents in South County had hoped for, but it at least offers some semblance of closure and certainty to a community that Grover Beach Mayor Jeff Lee said has been living in limbo for decades.

"Whether you agree or disagree with the decision, there's a direction," Lee told New Times. "There's a scope that as a city we can work with. We were going to be able to work with either choice, but certainty is really going to help."

Lee recently helped draft a March 12 letter to the Coastal Commission in which Grover Beach criticized portions of the plan to eliminate off-roading in the SVRA, noting the potential for major traffic impacts resulting from the Pier Avenue entrance closure and requesting economic assistance for businesses impacted by the prohibition. Grover Beach didn't take a hard stance for or against vehicle access, instead asking for a permanent decision above all else.

That, Lee said, is because the uncertainty surrounding the dunes access issue has had lasting impacts on the Grover Beach area. It's made it hard to attract new businesses and for existing businesses to plan for the future. With the fate of the SVRA always in question, Lee said corporations and entrepreneurs are often wary of setting up shop in South County.

"It's like when you start to have conversations with developers and those interested in making an investment in Grover, invariably the question either to the city or to the chamber of commerce or to other business organizations is, 'Hey, what's the status of the dunes?'" Lee said.

Grover Beach actually had to partner with the South County Chambers of Commerce to help attract new businesses to the area, which is likely not an issue for many other coastal towns. The South County Chambers is also working to diversify Grover Beach's economy, a move that Lee said was partly an attempt to prepare for the potential elimination of off-roading at the dunes.

A lot of existing businesses are heavily impacted by off-roading tourists too, including ATV rental companies, gas stations, grocery stores, and even Nan's Pre-Owned Books, a used bookstore that just happens to be situated next to a Laundromat frequented by campers. For those business owners, former Grover Beach City Councilmember Mariam Shah said the temporary nature of vehicle access in the dunes has made it hard to plan ahead.

You can't expect a business like BJ's ATV Rentals to spend money updating and beautifying its facility when it's under the constant threat of closure, Shah said. Rugged Radios, which sells intercoms and headsets that off-roaders use to communicate with each other while riding, recently debated whether to expand its business in Arroyo Grande. Eventually it did. Shah wonders what will become of that now.

Bruce Van Vort is the owner of Fin's Bar & Grill, a beachside seafood restaurant situated next to the SVRA entrance on West Grand Avenue. Due in part to its location, many of Van Vort's customers are off-roaders and campers.

"I've talked to OHV riders today," Van Vort told New Times the day after the Coastal Commission's vote, "and, I mean, they're in tears."

Though the Coastal Commission's decision is about the strongest stance any agency has taken on the matter in years, Van Vort said there's still a lot pending, making it difficult for him to prepare for the looming closure. The details of the phase-out plan and Pier Avenue closure remain to be seen, and the Friends of the Oceano Dunes, an organization that supports OHV access in the dunes, is gathering support and donations online to fight the ban in court.

If that lawsuit isn't successful and off-roading is banned, Van Vort said one thing is for certain. 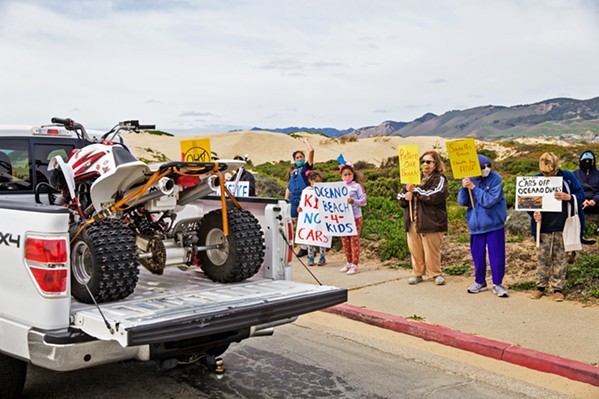 Still, he said, he's confident that the South County community will get through it together. He'd like to see a boardwalk and pier installed, and some kind of financial assistance program to help the most severely hit businesses.

If business owners have learned anything throughout the last year, it's how to think outside the box.

"Anybody who survived COVID knows how to deal with a crisis," Van Vort said. Δ