Enjoy a treat that's so, so cool 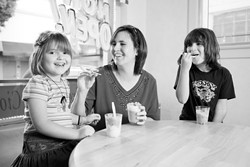 Dean Giordano, owner of the establishment, said that what he's dishing out is "a healthy alternative to ice cream. It's non-fat and non-dairy."

Giordano prefers to call his fruity frozen treat "Italian freeze" because it's made from whole fruit and not pureed, unlike some other fruit-and-ice purveyors. According to Giordano, "it's fruit and nothing but the fruit!" This distinction ensures that all of his delicious options actually taste like what they're made from.

But don't get his concoctions confused with Italian ice. Despite sharing the same country of origin in their name, the two frozen treats are quite different in consistency--Giordano's freeze is significantly softer than its icy cousin.

Giordano has used his recipe for years, at first for parties and then for treats he sold at Pismo Beach and car shows during the late 1990s. After taking an extended break for the birth of his daughters, Giordano felt it was time to offer San Luis Obispo something different again.

He decided to open his shop after a brief stint at San Luis Obispo Farmers' Market at the end of last year. Despite the cold weather, Giordano's Italian freezes stood out as specialty items and immediately developed a loyal group of customers. After four weeks at the market, Giordano felt that the response he received was good enough to justify opening his own shop.

Now settled at 1126 Morro St. (the former home of Beary Cute Bears), Giordano offers several flavors of his freeze, biscotti, and European-style hot chocolate. Eventually, he might add canoles and smoothies to the menu, but for right now he's focusing on the freeze.

"Best way to explain it is to come in and try it," Giordano said. "There's always free samples."