Amazing. Stunning. Wild. Alive. Those are just a few of the words Cal Poly professor Mike Geringer uses to describe the new handcrafted kitchen cabinets in his Arroyo Grande home. 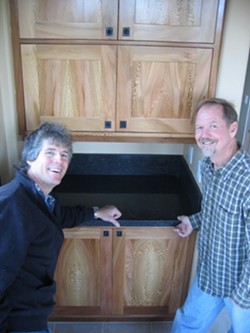 # The cabinets are made not of standard maple or oak, but of a locally grown sycamore tree removed from Phyllis Madonna's yard in a SLO neighborhood. Rather than hauling it off to the landfill, wood specialist Don Seawater of Pacific Coast Lumber took the massive tree to his Prado Road property to join a jumbled pile of logs destined for a new life as functional art.

Cayucos cabinetmaker Clark Kluver knew that local native sycamore would be the perfect material for Geringer's new kitchen, and was happy to find just what he was looking for from Seawater. The three men worked together to cut and plane the huge log into workable pieces for Kluver's handiwork.

"Everyone who sees our cabinets says, 'Wow, what is that?' They're always amazed to find out it's local," Geringer said as he gently stroked the intricate grain of the wood.

"There's no reason to bring in teak out of the rainforest and ship it halfway around the world. We have beautiful local woods right here," he added.

For Geringer, a professor of strategy and international business, it makes sense to reduce energy use and transport costs by using local materials. The inherent beauty of sycamore wood is an extra benefit.

"Unlike pressed wood products made with glue and chemicals, this is alive. It's a piece of art. It has that energy, that life force," he said. "It's the whole notion that you can continue the life of the tree, and reflect its energy in your home.

"This is cut, planed, and crafted locally. This wood has never been more than 50 miles from where it grew," he said with obvious satisfaction.

Cabinetmaker Kluver said he approaches the sycamore wood as an artist would.

"I fall in love with the material and the way it feels, with such appreciation of the natural qualities of the tree being reinterpreted to make something practical to us," Kluver said. 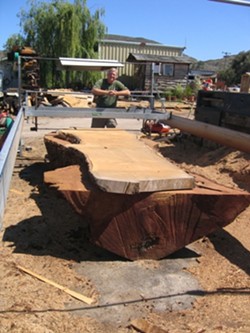 # Sycamore wood ranges in color from very light beige to dark reddish brown, with variations in its grain. Inspired by its beauty, Geringer said he "hated to throw away even the smallest sliver" while Kluver and he worked on building the cabinets that now grace his kitchen, living room, and bedroom.

"Sycamore has an iridescence to the grain. It picks up the light and reflects it with vibrancy. The way it captures the light, it sometimes looks almost like scales on a fish. This wood is so alive, it transforms the personality of the house," he said, beaming.

"The grain creates images," Geringer noted. "Look at this piece, above the stove. It has a Japanese-painting view of ocean waves and spray. It looks like a piece of art someone created."

Native sycamores aren't the only local trees that look beautiful indoors. Seawater at Pacific Coast Lumber said it's one of his favorite local woods along with olive and acacia but he also salvages local Monterey pine, Monterey cypress, walnut, and redwood trees that have blown down or become diseased. Property owners bring in Seawater and his crew to remove trees that have become a hazard like Madonna's sycamore or that stand in the way of a development project. Central Coast oak isn't suitable for woodworking, though, because the wood twists and cracks as it dries.

Seawater has been recycling local trees for nearly 20 years, after learning about the qualities of the wood from the former SLO city arborist, John Richardson. He's received grant funding from the Integrated Waste Management Authority for his equipment, and now his operation is self-supporting.

Pacific Coast Lumber has supplied wood from local trees for rebuilding the Santa Barbara Presidio, a historic gazebo in Ojai, and the Awahnee Hotel in Yosemite, among other projects, Seawater said.

He uses slabs of Monterey pine from Los Osos and Cambria to build rustic structures he calls "thinking rooms," which now decorate gardens and yards around the state. Chunky slabs edged with natural bark are in demand too, as rustic furniture is going more upscale.

"We're wood-waste management people. We've worked hard to create a market that other people haven't been able to do," Seawater said as he made an adjustment on a saw before cutting a thick slice from a sturdy Monterey cypress log destined to become restaurant dining tables at the Clubhouse at This Old House.

"People feel good about these wood products, their textures and feeling," he said. "There's a tremendous number of people having so much fun and creative expression with this wood."