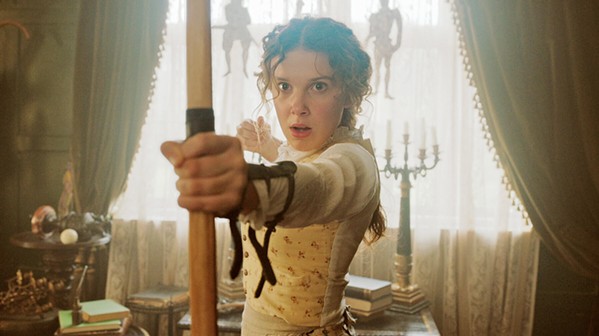 I smell a franchise coming. Harry Bradbeer (Dickensian, Fleabag) directs this story based on young adult author Nancy Springer's book The Case of the Missing Marquess: An Enola Holmes Mystery, the first in a series of mystery novels about Sherlock and Mycroft Holmes' precocious younger sister, Enola (Millie Bobby Brown). Henry Cavill is the crack detective, Sherlock, and Sam Claflin is the politician, Mycroft.

When Enola discovers her mother, Eudoria (Helena Bonham Carter), has gone missing, she embarks on a mission to find her. On the train to London, she encounters a runaway lord, young Tewkesbury (Louis Partridge), who's being followed by man named Linthorn (Burn Gorman), who appears to want Tewkesbury dead.

As she's following clues to her mother, she realizes Tewkesbury is in grave danger and unable to protect himself. What follows is an exciting and perilous adventure. There's a bit of the same feel as Guy Richie's excellent rebooting, Sherlock Holmes (2009), but Enola's penchant for breaking the Fourth Wall and acknowledging the audience gives this film a cheeky and charming quality that's hard to deny, and Brown is positively effervescent in the role. (123 min.) Δ