The battle over the Oceano Dunes State Vehicular Recreation Area is once again heating up, after the SLO County Air Pollution Control District threatened to issue violations against the California Department of Parks and Recreation for allegedly failing to properly enact dust mitigation measures.

And while there doesn’t appear to be an end in sight for the local controversy over the dunes, a similar battle is raging at the state level over a proposed bill that calls for a number of changes to California’s off-highway recreational vehicle areas. 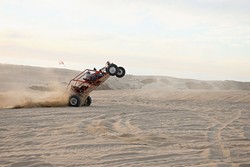 Part of the proposed bill focuses on beefing up environmental regulations to prevent off-road vehicle use from damaging sensitive habitats in OHV parks.

“You have tires spinning and running over the ground, so you have damaged soil, broken-up vegetation. Erosion occurs and habitats are lost,” said Greg Suba, conservation director for the California Native Plant Society, a nonprofit organization that helped craft the proposed bill.

Among its other provisions, SB 249 would add protecting cultural and natural resources as one of the OHV division’s highest priorities and would require that areas damaged by off-highway vehicle riding be closed until the damage can be repaired. If such damage occurs repeatedly, the area could be permanently closed.

In addition to addressing environmental concerns about the impact of OHV activity, the bill would also make major changes to how the division gets funded. Under the current law, the state’s OHV division receives a percentage of the state’s fuel tax. The bill’s other supporters argue that the division receives a substantial percentage of that money, despite the fact that OHV activity accounts for a much smaller percentage of outdoor activities than non-motorized recreation like hiking, camping, and biking. The current funding formula has resulted in large funding surplus for the division ($145 million this year), even though a 2012 study by state parks showed just 4.7 percent of respondents said they engaged in off-road riding while visiting a state park.

“Whether you support OHV or not … chances are you’re paying for it,” Suba said.

The bill would change the formula used to calculate the division’s share of the fuel tax and allow state parks to determine the percentage allocated to the OHV division, which supporters believe will result in a more equitable distribution of the money. The funding allocated to state parks would be used to support non-motorized vehicle activity.

While its advocates tout the proposed legislation’s reforms as necessary, off-highway vehicle enthusiasts and lobbying groups have taken firm stances against the bill. One of those groups, the Blue Ribbon Coalition, opposes the bill, which it says would gut the state’s current OHV program, which they say already sets a “gold standard.”

“It is my belief that SB 249 would have a devastating impact on managed OHV recreation in California,” Amador wrote. “The affected parties include; OHV recreationists, small businesses, county and federal partners, rural economies, and our natural resources.”

Like the local battle over the Oceano Dunes, the fate of SB 249 remains to be seen. The proposed legislation has already passed through the natural resources committee, and must also be approved by the Senate’s appropriations committee before a full vote.