"The result is just an explosion of its own, encompassing so many different aspects of what it means to be a part of the LGBTQ community," Kawamoto said. "And it's now obviously affecting children." 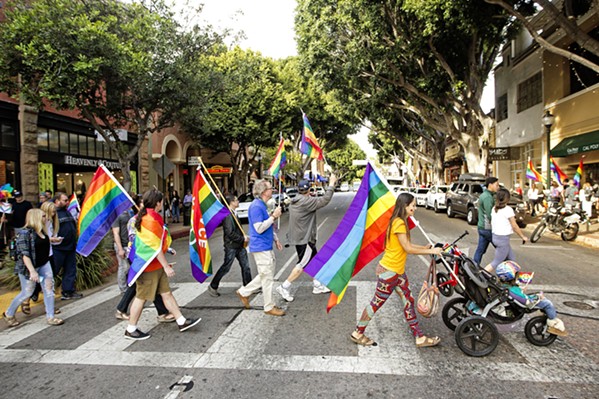 The Equality Act, passed by the House of Representatives in February, defines and includes sex, sexual orientation, and gender identity among the prohibited categories of discrimination or segregation.

The legislation would amend the 1964 Civil Rights Act to protect people from being discriminated against based on sexual orientation and gender identity in employment, housing, and other services.

"A lot of it [is happening] in the conservative Bible area of Tennessee, Mississippi, and Arkansas where we're seeing doctors and schools are given the right to deny people access to medicine and care," Kawamoto said.

Anti-transgender legislation, Kawamoto said, is only going to continue until the Equality Act has passed the Senate.

"Every American should be treated equally and with dignity, regardless of their sexual or gender orientation. Unfortunately, discriminatory legal barriers hinder the LGBTQ-plus community's access to employment, health care, adoption, housing, education, and so much more," Carbajal said. "By amending our civil rights laws to make sexual orientation and gender identity protected classes, the Equality Act would provide consistent and explicit protections for LGBTQ-plus people in every state."

Carbajal voted in support of passing the Equality Act in the House of Representatives. He said he's grateful the House "stood on the right side of history" to bring the country one step closer to full equality for every American; however, the work isn't finished. He said he's hopeful it will be given due consideration in the Senate.

The 2020 American Values Atlas of the nonpartisan Public Religion Research Institute surveyed more than 10,000 adults in the U.S. from January to December in 2020. It found that 76 percent of adults favor LGBTQ protections. Less than 1 in 5 adults, 19 percent, opposed such protections.

Kawamoto said while there is strong support, she believes there's a lack of representation of transgender individuals to stand up and say to society that "we have to take action."

For the past year, Kawamoto has been grateful for her Morro Bay community that's been a part of her transition, but she said it's also been a scary experience to be an Asian American transgender woman who's a lesbian.

The fear has only heightened, she said, when she learned about two alarming statistics. The Human Rights Campaign reported at least 37 transgender and non-conforming people were murdered, more than any other year since the nonprofit started tracking deaths in 2013.

But it's not new.

"My uncle lived through this already. He was put into Manzanar, which was an internment camp in [Independence, California] for Japanese Americans during World War ll. So I come from a history of living this through this form of racism. As long as my family has been here, we've been a part of it," she said.

Kawamoto's father had a 33-year career with the United States government that included working for the U.S. National Institutes of Health. She said that her father also enlisted in the U.S. military and was ranked a corporal acting sergeant, and he was proud of his accomplishments and contributions to his country.

Despite Kawamoto's father's work, she remembers growing up in Maryland and being mocked for the shape of her eyes or her English pronunciation. And now as a transgender woman, she's been called "coronavirus" or has purposefully been given directions to the men's bathroom instead of the women's bathroom.

"Having to explain who and what I am is a double whammy because it's not only the transgender part of me but also the Asian American part of me," she said.

Kawamoto said she's ready to start a conversation and create a support system for herself and others. She wants the community to acknowledge and appreciate the contributions of its Asian American and transgender neighbors, but more importantly, she wants the community to understand the importance of the Equality Act for not only herself but for others on the Central Coast and beyond.

"If America is a mosaic of its people and you pull out the threads of Asian Americans in that mosaic, you're left with a mosaic that's incomplete," she said. "We belong in the mosaic." Δ