On June 26 the Supreme Court issued its most direct and monumental LGBT-rights decision to date. With a 5-4 ruling, the highest court in the country called marriage a right and shut down all state laws that prohibit same-sex marriage. From here on out, there’s no more “gay marriage,” only marriage.

Locals gathered at the SLO County Courthouse Friday afternoon to celebrate the ruling. A crowd of about 100 people cheered and waved flags. Morro Bay High School student AnneMarie Aiena cellebrated with her father and fellow student Kayla Burkman, who was wearing a rainbow flag for a cape and waving a small American and rainbow flag. 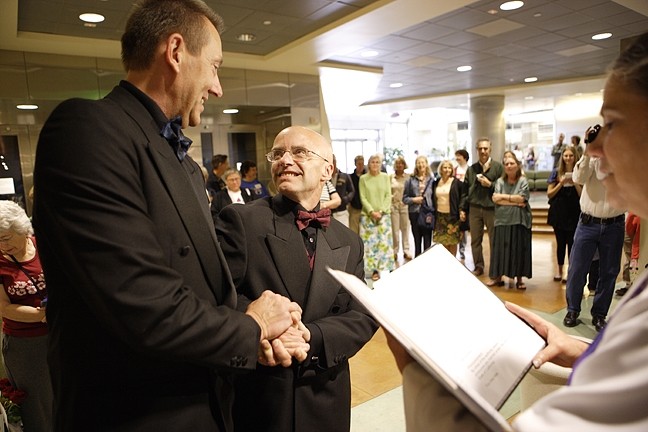 Same-sex couples have been able to marry in California since 2013, but until this ruling, 14 states still banned same-sex marriage, and there was no continuity between states. A same-sex couple traveling between states could lose their marriage status, including the legal benefits in states that didn’t legally recognize same-sex marriage. The Supreme Court’s ruling made clear that such laws violated the 14th Amendment of the Constitution, which guarantees all citizens equal protection under the law.

Justice Anthony Kennedy, who wrote the majority opinion, made it clear that, in at least one arena, same-sex couples are equal to heterosexual couples.

“The right to marry is a fundamental right inherent in the liberty of the person,” Kennedy wrote. “Couples of the same sex may not be deprived of that right and that liberty.”

The ruling is no panacea for discrimination, nor does it address the full range of issues the LGBT community is seeking to change. Jon Davidson, legal director for Lambda Legal—a group specialiazing in LGBT legal issues, which represented one of the couples in the Supreme Court case—said his group is still looking to dismantle numerous laws which explicitly discriminate against LGBT people. In several states, a person can still be fired from his or her job for being gay, for example.

“There’s still many problems that we need to address,” Davidson said. “But today is a day to celebrate.”

Outside the SLO County Courthouse on Friday, Mark Plants and Mike Hughes, whose relationship spans three decades, and Paul LaRiviere and Jim Lipsett stood under a fig tree as the rally wound down and reflected on the ruling.

“I never thought we’d see it,” Plants said. “We were alive when you could get arrested for dancing with someone of the same sex. To see this amount of change, this is really remarkable.”

Plants and Hughes’ relationship perfectly charts the progression of LGBT rights in the country. The pair started dating in 1990, and in 1993 they were wed in a commitment ceremony on the steps of the IRS building in Washington, D.C. They exchanged rings, were sealed by the Rev. Troy Perry, and that was it. The pair still considers it their “real” wedding, but as far as the government was concerned, it was a commitment made without legal backing.

Almost a decade later they were granted a domestic partnership by the state, and three years after that they had to file more papers with the state to “re-up” their status. They were granted legal rights, like hospital visits, end-of-life decision making, and inheritance, but it wasn’t “marriage” yet.

In 2008, there was a brief window when same-sex couples could marry in the state. Plants and Hughes got hitched for real that October—15 years after their ring exchange. Weeks later, California voters passed Proposition 8, the constitutional amendment to ban same-sex marriage. It didn’t matter.

“We were married,” Hughes said, “and they couldn’t take that away from us.”

For Huges and Plants, the next step in the saga will be a religious ceremony.

June 26 was an important date for many LGBT people before the recent ruling. On this day in 2003, the Supreme Court struck down a Texas anti-sodomy law, which targeted gay men. In 2013, the court struck down DOMA, the Defense of Marriage Act, and California’s voter-approved constitutional ban on same-sex marriage. Supreme Court rulings are usually announced Tuesdays and Thursdays, which caused many people in the LGBT community to take notice when the court announced it would release a decision on a Friday. June 26 is now a quadruple anniversary for the LGBT community.

June 28 is also the anniversary of the 1969 Stonewall riots, which set in motion the LGBT rights movement. Pride festivals typically occur around this anniversary, and SLO’s pride celebration will happen the weekends of July 4 and 11.

Hughes, Plants, LaRiviere, and Lipsett briefly fretted about the potential legal backlash to the ruling. In theory, Congress could amend the U.S. Constitution to make same-sex marriage illegal again, but Lipsett bushed it aside, saying, “We’ll just have to do it again. We’ll go all the way to the Supreme Court.”

Kylie Mendonca is a staff writer for New Times. Reach her at kmendonca@newtimesslo.com.