Life isn't wonderful, but theater is

At the risk of coming across as pedantic and overly cultured, I’m going to sum up my feelings about the film version of It’s a Wonderful Life by quoting Phoebe Buffay (beloved Friends airhead): “It should have been called it’s a sucky life and just when you think it can’t suck any more—it does.” 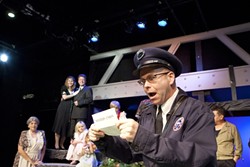 As a child, the film terrified and depressed me. Who knew children could get their ears boxed until they bled for performing a good deed? And as if George Bailey wasn’t sufficiently punished for that good deed, the entire plot seemed like an endless sequence of punishments and disappointments for nothing less than more good deeds.

So obviously I was the natural choice to review SLO Little Theatre’s production of It’s a Wonderful Life. If I loved it, I could credit the Little Theatre with helping me to discover a newfound passion for an old—and at 66 years, the story is definitely that—Christmas classic. And if I hated it, well, I’d have another opportunity to rant about how the story of a guy trying to commit suicide on Christmas Eve cannot possibly qualify as uplifting holiday fare, no matter how many freaking carols you throw in. And I do love a good rant. Or 12.

As it turns out, the theatrical version of It’s a Wonderful Life is a pretty faithful spin off the film—cheesy, full of heart, and far too over the top, though I happen to think cheese reads better in live theater than on screen. Take the four carolers who appear throughout the play to sing holiday classics and effectively set the mood for the inevitably cheesy, over-the-top drama happening onstage. Through some trick of science, there’s something about the human voice—not captured in some deceptive sound system and played back, but directly in front of you—that mellows and uplifts even the most sarcastic of reviewers.

From there, the actors took over and were—with a few minor exceptions—exactly who you would expect them to be, assuming you’ve seen the movie. And I’m making that assumption, so if you haven’t, go and watch it and then come back and finish this review. As the angel Clarence, Richard Dresp is bumbling and funny and well intentioned. And, best still, he resembles a spiritual guru, dressed all in white. Maggie Coons is a charming Mary Hatch.

And Chad Stevens is a more than competent George Bailey. However—and this is where the resources of a film undeniably win out over a “little” community theater—he fails to pull off Jimmy Stewart’s age-transcending jaunt through memory lane. In Stevens’ defense, Stewart was in his late 30s when the film was made, whereas Stevens has the challenge of playing a man in his 20s and 30s from the vantage point of a man in his 50s. And there’s something desperately unnatural about the sight of a man in his mid-50s speaking eagerly about the prospect of college while dressed as a high school football player. George Bailey’s defining characteristic—well, before the attempted suicide, at least—is his youthful optimism and drive. And when you cast a character a full 20 years older than the character he’s playing—and that’s at George Bailey’s oldest—you can’t help but remind people of the fact that they’re watching a play. Chad Stevens is pretending—and again, he does this well—to be George Bailey.

At the other end of the spectrum, Sarah Willingham appears perfectly cast as Violet Peterson. But while you might describe Violet as the town flirt—though a harmless flirt, and one who seems to have a good heart—I had no idea, based on the movie, that she was supposed to out-vamp Jessica Rabbit. In the original film, Gloria Grahame might have given Marilyn Monroe a run for her money, but there’s an exaggerated, cartoonish quality to Willingham’s Violet that far exceeds the definition of flirt. I expected a degree of overacting. This is, after all, a play based on a movie made in an era in which all acting was essentially overacting—at least by contemporary standards. But there’s a difference between a character and a caricature and, though it’s sometimes difficult to figure out where the line is, it’s obvious when it’s been crossed.

Now there’s the question of whether the rest of the audience would agree with me on these points. And the answer is: probably not. The SLO Little Theatre is at least one place on the Central Coast where you’re guaranteed a white Christmas—and that’s a reference to both the age and ethnicity of the audience. And they seemed to have a fine time. Had there been other people in their 20s or 30s in the audience, I rather doubt their reaction would have been the same. You’re not going to convince someone in their 20s or 30s that a middle-aged man saying, in all seriousness, “Hot dog, just like the church choir sings it!” is something to be taken all that seriously. Of course, if you belong to the generation for whom “hot dog” was a legitimate exclamation, attending church was something real people actually did, and young men made a point of flirting with their aunts for fun, SLO Little Theatre’s production of It’s a Wonderful Life is an absolute bulls-eye. But there will never, ever be a play that can get away with referencing “the little Mrs.” without my feminist hackles rising. I always walk away from the story with a very clear picture of a protagonist fighting for a man’s right to put a roof over his family’s head, and there’s something very marginalizing about that view of The American Family. And that’s even before you take all the proselytizing into account.

In the play’s defense, there are some ideas that leap boldly across the space of 66 years. There’s something timeless about being young and wanting a future bigger and brighter than the one your small town can hand you. And, unfortunately, there’s also something timeless about watching those big, bright dreams deferred year after year. And there will always be men like Mr. Potter, for whom the bottom line is the only thing that matters. In fact, viewed through the political and social unrest that spawned the Occupy movement, It’s a Wonderful Life is nothing if not timely.

While we’re on the subject, as far as villains go, Michael Siebrass’ Mr. Potter steals the show as the wheelchair-bound menace of Bedford Falls. He rolls around town making demands—fiendish, plotting, unapologetic. Siebrass is more than up to the task of gleefully being the most hated man in Bedford Falls. There’s no redemption for Mr. Potter, no epiphany, no secret longing for human companionship, no moment of contrition catering to the whims of an audience demanding a happy ending at all costs. And that’s a nod to reality I can appreciate.

And just when the socio-political commentary and an avaricious old coot in a wheelchair are drawing me steadily toward the cheese-slathered fiction of Bedford Falls, George Bailey delivers the line “We’re willing to build him a house worth $5,000.” And I’m firmly back in my seat. It’s 2012. And you’re not going to buy a house in San Luis Obispo for less than $600,000. Where’s George Bailey when you need him?