Erik Howell criticized for comments about the Oceano Dunes

Erik Howell doesn't believe the debate over the Oceano Dunes is an environmental justice issue—that's what he implied at a recent California Coastal Commission meeting, anyway—and now he's facing scrutiny from some locals who say his comments were way off base. 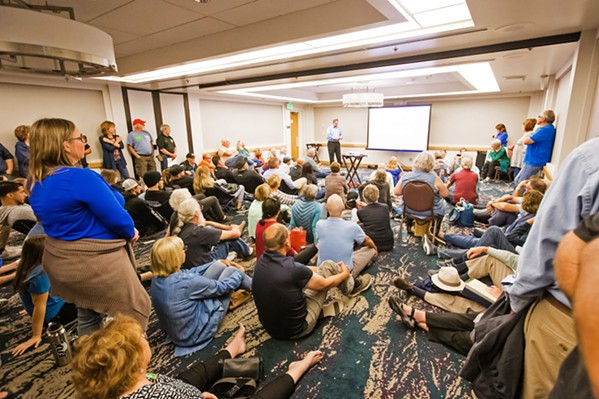 At a Coastal Commission meeting on Oct. 18, California State Parks presented a quarterly update on its public works plan, a still-developing set of strategies aimed at addressing longstanding environmental and health concerns in and around the Oceano Dunes State Vehicular Recreation Area—problems that are largely thought to be caused by off-highway vehicle riding.

After a presentation from State Parks staff regarding its various public outreach efforts, safety campaign, and the development of its website dedicated to all matters regarding the Oceano Dunes, Commissioner Linda Escalante asked what State Parks is doing to address the environmental justice issues at play in Oceano, a concern Coastal Commission staff have repeatedly requested State Parks to consider.

Commissioner Escalante said that disadvantaged residents in Oceano and Nipomo are being exposed to potentially harmful dust emissions, and if they're getting sick, it could prevent them from getting to work, which could in turn feed the cycle of poverty.

But Commissioner Howell, who is also a Pismo Beach City Council member, disagreed.

"What I have to say is I don't like any of this," Howell said at the meeting. "Quite frankly, with all due respect to Commissioner Escalante, the comments regarding environmental justice indicate an ignorance of the geography and the demographics of this area."

Howell continued by saying that SLO County community members, elected officials, and business owners want to keep the park as is. He said that when he went on a tour of the dunes earlier this year, those in attendance were "non-minority, by and large, non-elects, and they weren't really affected by the dunes at all."

"I am of course passionate about this," Howell said. "I'm well acquainted with Oceano Dunes, Pismo, Oceano, and I guess I'm frustrated because I don't feel like the commission has really stepped up to get themselves as informed on the issue as I think they should. I also, with all due respect to staff, I don't think that they've done their homework."

Those comments put Howell at odds with Oceano residents like Cynthia Replogle, director of the Oceano Community Services District, who said Howell's comments were "misleading" and in some places totally inaccurate.

A number of community members, business owners, and elected officials in SLO County avidly support limiting off-highway vehicle riding in the dunes, Replogle said, for both environmental and health reasons.

With Oceano and Nipomo's populations being made up largely of Latino residents and those at the federal poverty level, Replogle said the issues at the Oceano Dunes clearly amount to environmental injustices, which she said Coastal Commission staff have acknowledged in various presentations and reports.

In its staff report for the Oct. 18 meeting, staff included information on the ways in which vehicle use in the dunes has disproportionately impacted residents of Oceano and Nipomo, "who bear the burdens of the [Oceano Dunes State Vehicular Recreation Area] operations with essentially none of the benefits."

Oceano's population is about 50 percent Latino with a federal poverty rate of nearly 20 percent, according to the staff report, and Nipomo's is 40 percent Latino with a federal poverty rate of 10 percent. While businesses in Pismo Beach—which is 84 percent white and has an 8.4 percent poverty rate—are frequented by out-of-town off-highway vehicle users, the staff report says Oceano is economically depressed, especially for a coastal town, and its residents and those in Nipomo are forced to deal with the traffic, dust, and damage caused by riders in the dunes.

Coastal Commission staff have done their research, Replogle told New Times. They've been out for tours of the beach and riding areas, they've been to meetings, and they've spoken with community members.

"I believe Mr. Howell was unaware of all those contacts, but staff is very knowledgable on this issue and they know what they're talking about," Replogle said. "And I don't think he does."

In a letter to New Times, community member Bonnie Ernst also shared her concerns over Howell's Oct. 18 statements, and she said that his comments regarding the tour he attended were untrue. Ernst said attendees of the meeting, which Howell said included few minorities and elected officials, actually included members of the Oceano Community Services District, the president of the Chumash Tribal Council, Oceano Beach Community Association members, other group representatives, and several home and business owners of Oceano.

The quarterly public works plan updates like the one presented at the Oct. 18 meeting are part of an agreement State Parks and the Coastal Commission settled on after a July 11 meeting, where commissioners considered staff recommendations to limit off-highway vehicle riding in some portions of the park. The various recommendations were intended to better protect endangered species that live and breed in the dunes, as well as the neighboring communities that have long fought to reduce potentially dangerous dust emissions that are thought to be worsened by vehicle riding.

The recommendations were voted down 8-2 by the Coastal Commission at the July meeting, with the condition that State Parks seriously address each of the issues laid out by the recommendations in its public works plan. Δ