Pismo Beach City Councilmember and California Coastal Commissioner Erik Howell had his law license suspended for 60 days by the state bar last month for professional misconduct stemming from his work on a 2011 civil case against San Luis Obispo County.

In a state bar decision made in October 2018, Howell was found in violation of multiple laws, including causing "significant harm" to his client by repeatedly failing to attend court hearings, file oppositions to the county's motions, and answer client communications—which resulted in a losing case and his client owing $10,000 in opponent attorney's fees. 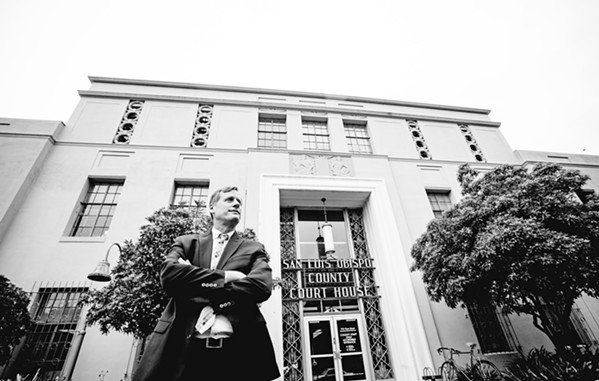 When the case concluded, the client, Linda McCormick, sued Howell for legal malpractice, and in 2016 a SLO County judge awarded her $187,067 in damages. The state bar claims that Howell failed to report the outcome of that case to the agency as obligated by law.

In total, the bar found Howell in violation of five statutes, with aggravating circumstances of committing multiple acts of wrongdoing. According to the bar, Howell acknowledged his misconduct and submitted 10 letters of good character from area attorneys and community members, which, in addition to his lack of a prior record, were considered mitigating circumstances.

Howell did not respond to New Times' requests for comment before press time.

McCormick first hired Howell as her attorney in 2013. He represented her as a Jane Doe in a suit filed in 2011 against SLO County that alleged medical malpractice and negligence.

James Rummonds, the Aptos-based attorney who represented McCormick in her lawsuit against Howell, called the case "among the worst examples that I've seen of total absence of legal ethics, morality, and skill."

"[The 60-day suspension] is not even a slap on the hand; it was a tap," Rummonds, a legal malpractice specialist, told New Times.

Howell's suspension is effective Feb. 22, and he'll remain on probation for a year, according to the bar.

In June 2018, Howell was one of five current and former coastal commissioners to be fined for violating transparency rules regarding ex parte communications.