Escape to 15 Degrees C Wine Shop and Bar in Templeton

The barstools in 15 Degrees C Wine Shop and Bar and the view of chef Nathan Clapp's open kitchen are on hold for the time being, but the authentic Italian food and neighborhood wine stop in Templeton has an outdoor oasis just for you.

Clapp dances and sings around his turntable of from-scratch pizzas and pastas, shared plates, salads, burgers, and hot dogs. You can take your food and wine to an outside table with a nearby mist machine to calm down and level out during the continuously unfolding series of historic events we keep experiencing.

Clapp said he appreciates that their customers have been patiently working with them and sticking with them as they navigate the ever-changing COVID-19 restaurant/bar regulations and recommendations.

"We're trying to learn how to get through it together," Clapp said. 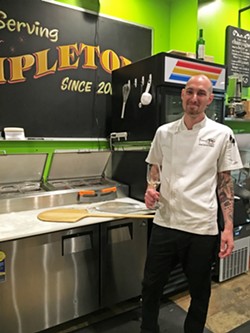 All that is required of you is to order at the counter and sit down in the breezeway or on the adorable patio that looks onto Main Street. Menus have QR codes for your phone to interpret, or you can go old-school and check out the ol' sandwich board on the sidewalk. Clapp will tell you the specials as well. The vibe is casual, cool, and relaxing with farmhouse/industrial decor and colorful hometown charm.

If you are one of the many Templeton regulars, you already know this, and you will be greeted by name. Clapp knows all of you. Templeton kind of reminds him of his hometown of Montezuma, Indiana. At 7,700 people, Templeton's population is the size of his entire hometown county. When he grew up, he knew every single person by name, and they knew him as well. He fits right in in North County, right down to the back of the 15 Degrees C T-shirt: "Keep Templeton Country."

The place reminds everyone of the famed Boston bar from that old '80s TV show we used to watch, Cheers, "Where everybody knows your name, and they're always glad you came."

Clapp brought us Mexican Coca-Colas, and I tasted some wine that Carscaden had opened—a rare glass of white. Carscaden has advanced certification through the WSET (Wine and Spirit Education Trust) and is a certified sommelier through The Court of Master Sommeliers. Her wine shop and bar serves both local wines, such as the Barton Family's Grey Wolf, but also specializes in boutique and hard-to-find imports and interesting varieties.

For this reason, 15 Degrees is one of those places frequented by winemakers and beloved by wine geeks. Clapp and Carscaden love their customers, and you feel that kind of Templeton hospitality when you come in.

You can order from a handful of pizza options—from the Calabrian to the Napoletana. I've written about Neapolitan pizza before, that chewy, crispy crust with Italian tomatoes and fresh mozzarella.

It occurred to me that it must be difficult to wear a mask as a chef when you need to taste the nuance and variations in your dishes and that it must be hard to go from open kitchen to pizza oven without that key sense of smell. Not surprisingly at all, when I visited 15c in mid-August, I found that Clapp is making it happen despite the odds. My pizza and pasta were so delicious and authentically Italian, I realized I wasn't the only one looking at plane ticket prices to Italy. 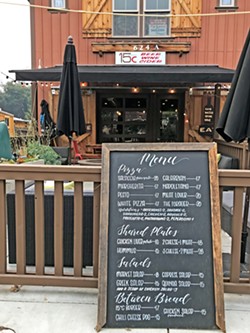 Clapp said as soon as coronavirus hit, he felt the need to travel again, and though he didn't have plans to travel, he said, "The second you tell me I cannot go to Italy, I need to go there real bad."

He said his interest in cooking started when he was a teenager, at a time when his mother had a tough pregnancy and needed him to heat up some food. It made him feel so good to be a part of the meal prep. The next time he became interested in cooking came when looking through a calendar of Italy at a kiosk in the mall.

Clapp worked two jobs for an entire year so that he could move to Rome, Italy, and he fell in love with cooking while living in the Trastevere district of Rome. He said the inspiration came from the open-air markets, where he would buy food and experiment with it in his apartment.

"It completely changed my life," Clapp said. "It showed me that there was a whole world out there that was not small-town Indiana."

At that time he didn't see a future in being a chef.

"There's no money, long hours—it's hot. It's dirty, ... and you work every holiday forever," he said with a laugh.

So he enrolled at Indiana University, earned a master's degree in business, and moved to Dallas, finding work in the business world. Yet after a year of feeling unfulfilled, Clapp left his job to enroll in Le Cordon Bleu Institute of Culinary Arts in Dallas.

He loved it, moved back to Italy, and vowed to instill the cultural experience in all his cooking. He traveled the world working in restaurants in Australia and faraway rainforests. When back in the states, he found a trusted mentor while working with chef Nicholas Walker at Rosewood Mansion on Turtle Creek and worked as a chef on a cruise ship in the Bahamas.

He and his future wife settled down in California, where Clapp worked as executive chef at Villa San-Juliette Winery in San Miguel prior to joining 15c. Mid-August marked his two-year anniversary at 15c. It wasn't too long ago that Clapp convinced Carscaden that he was the chef she needed to bring a little Italy to Templeton.

The neighborhood place has rolled with the punches since the mid-March shutdown. They expanded the to-go food options and wine bottles for takeout and secured a Paycheck Protection Program loan.

Clapp said sometimes he worries about the uncertainty that rainy and winter weather will bring as well as the ever-changing pandemic mandates and requirements, but not enough that he will stop whistling while he works. No matter how sarcastic you think he sounds when you ask him how he's doing, he's going to say, "Living the dream," and mean it. 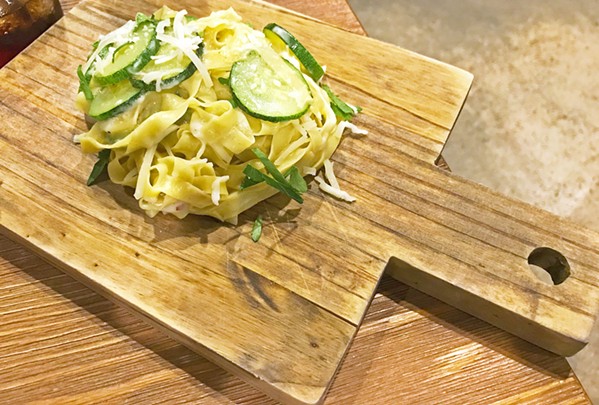 If you haven't been to 15 Degrees C yet, I hope you will take Clapp's advice and order the Margherita pizza. He says it proves his pizza is the real deal. I assure you, it is.

But after that, make sure you order at least one pizza to-go, so you have some 15c love for tomorrow. Locals' pizza of choice is the Forager: Roasted mushrooms perfectly executed in a Parmesan cream truffle sauce, topped with fresh arugula, grated Parmesan, and speck (smoked prosciutto).

But what really made my day was the homemade pasta special: the Pasta al' Nerano, a dish invented in the '50s in Nerano, a small town on the Sorrento peninsula on the Amalfi Coast, where they grow divine zucchini. The flavors were wonderful and delicate.

A vacation of the senses, and a welcome escape. Δ