Situated along Pismo Beach's famous stretch of sand, with a stunning panoramic view of the pier, Somerset Grill is located within the luxury hotel: Vespera on Ocean, a brand-new 124-room upscale hotel. The restaurant provides market-fresh, regionally inspired oceanside Americana cuisine for breakfast, lunch, and dinner, with an oceanfront poolside bar and breezy patio seating offering craft cocktails, local beer and wine, and a gorgeous sunset view. For reservations, visit somersetgrillpismo.com or call (805) 779-4065, or follow Somerset Grill on Instagram and Facebook. The Somerset Grill is offering a special Thanksgiving by the Sea on Nov. 28 from noon to 8 p.m. for $65 per person. Visit somersetgrillpismo.com to take a peek at the menu.

Let's stroll along the Pismo Beach boardwalk for a moment. The sun is setting, and you're in the mood for dinner and drinks just as this new hotel catches your eye.

Beyond the Vespera on Ocean's artsy modern front desk, the Somerset Grill's dining room beckons with sophisticated custom furnishings and plush booths. From the tables, diners can see the high-energy showcase kitchen and wood-fired grill that doubles as a rotisserie oven.

Inside is warm and convivial. But for the coastal experience, the beachfront bar is the place to hit before sitting at a table. 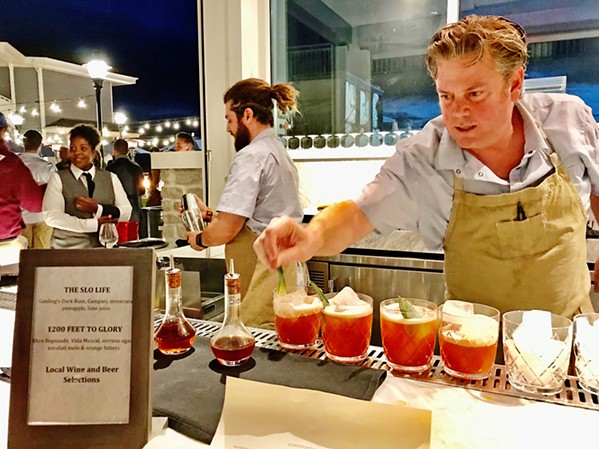 While waiting for a cocktail or glass of wine, diners can people watch as locals and tourists take their American-style passeggiata (leisurely stroll) along the wooden boardwalk. The poolside patio is dotted with little camps of lit, brick fire pits and white Adirondack chairs. This is where vacationers and lovebirds would want to have an intimate conversation. 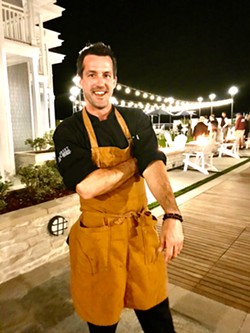 The Somerset has been open since mid-October, and during its opening party in mid-November, I met Executive Chef James King. He was glowing with high energy as the sky darkened.

King described why he chose to move to SLO County and open the Somerset in the Vespera on Ocean after a recruiter told him about the opportunity.

"I think what really sold me was the whole comfort-food aspect," he said, adding that the restaurant was modeled to be a neighborhood place, an eatery that provides relaxation to unwind over drinks and coastal American food, but with that theatrical open kitchen and wood fire centerpiece.

At the ribbon cutting, Cory Alder, president of Nexus Companies—the developer of Vespera on Ocean—told the community that after one interview with King, he knew he'd found the right captain to steer his new restaurant.

"He's passionate and he cares," said Alder, noting that in addition to heart, King is meticulous with his attention to detail.

He said King took on opening the new restaurant like a true professional.

From the helm, this new captain recommended trying the wood-grilled romaine salad, a twist on regular ol' greens. The smoky, charred whole-heart Caesar salad goes well with oven-dried tomatoes, focaccia croutons, Parmesan-Reggiano, and a white anchovy Caesar dressing, which could be made into an entree with added wood-grilled Pacific shrimp, chicken breast, salmon filet, or ahi tuna.

I had never had "grilled" salad before—is that a Pennsylvania thing, I asked, since King grew up in Lancaster. He said no.

King said he remembered grilled romaine from ordering it from a restaurant on his first date back in his high school days.

"We just grill it real quick to get the char and the grill flavor," he said.

King also recommended the Central Coast lobster roll, which is on both the lunch and dinner menus—a satisfying lobster sandwich dressed in spicy aioli, flavored with celery, scallions, and citrus on a buttered and toasted brioche roll.

King said he's especially proud of his open-fire-grilled artichoke served with lemon aioli. I can't think of anything better than the artichoke dish and a SLO Life cocktail, made with Gosling's dark rum, Campari, demerara syrup, pineapple, and lime juice.

Dessert does not disappoint.

For the chocolate lovers, there's a sinful chocolate mousse dome made with brownie crumble, vanilla whipped cream, red cherry compote, and dark chocolate ice cream. And for those in need of even more richness in life, the menu offers a goat cheesecake with raspberries, candied lemon, mint crystals, and a graham cracker crust. 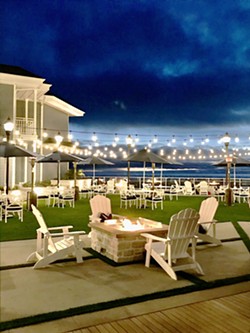 To take the job at the Somerset, King moved his wife and 5-year-old son from Santa Barbara, where he was working as the chef de cuisine at the Hotel Californian. King holds a culinary degree and bachelor's degree in Hotel and Restaurant Management from Mercyhurst University in Erie, Pennsylvania. His résumé is colorful, with experience at fine dining restaurants and posh hotels, from working as a chef de partie at the elegant Bouchon Bistro to the high volume job of executive chef at the Sunset Tower Hotel in West Hollywood.

The energetic chef learned to love the art of cooking and entertaining from his father, a traveling salesman and veritable Jedi master of homemade gnocchi, who loved to experiment from his vast library of cookbooks. He said his mom made lasagna and meatloaf, but his dad would woo him with chicken liver ragu and homemade pasta.

King has a dynamite staff of two sous chefs—Anthony Reeves and Christine Reyes—and a cooking staff of 20. With a silly, Monty Python-esque sense of humor, he keeps the kitchen morale up by engaging with both the front and back of the house. There may be some air guitar going on, and King said he likes to sing on the job.

Flavor writer Beth Giuffre is getting her hands on another grilled salad. Send Caesar dressing to bgiuffre@newtimesslo.com.