Escape to the outside

Poly Escapes takes students off campus and into the wild

ASI Poly Escapes trips open for registration on Sept. 17. The first trip heads to Pear Lake in Sequoia National Forest on Sept. 29. You can learn more about the program by attending an informational meeting in the training room at the Recreation Center on Oct. 4 at 7 p.m. Interested in becoming a trip leader? Head to the training room at the Rec Center on Oct. 11 at 7 p.m. Visit asi.calpoly.edu/recreation_center/poly_escapes for more details.

She woke up to a foot and a half of snow, and fellow campers with tents that were caving in under its weight. Then, one of the vans got stuck in the fresh powder covering that section of the Alabama Hills on the east side of the Sierra Nevada. And on top of all that, everyone seemed to be a little bit sick.

Kate Lane was on an ASI Poly Escapes trip, where potential trip leaders were attempting to learn snow camping skills. An aspiring trip leader at the time, Lane was in training to lead fellow Cal Poly students on backpacking and camping trips through places like the Sierra, Big Sur, and Joshua Tree National Park.

"Everything that could go wrong did, and it was a really great opportunity for us to come together and figure it out," said Lane, now a senior anthropology and geography student at Cal Poly. "It was a really great experience, and a lot of us bonded really well because of it."

Of all of the trips she's been on in her three years working for Poly Escapes, that one is her favorite. There's something about pulling together and making things work that appeals to her: strength in the face of adversity, conquering the elements, self-reliance, trusting your adventure partners. These are the things you depend on when you're outside in the wild. Well, that, and your equipment.

Luckily, Poly Escapes also has an outdoor equipment rental shop on campus. The Associated Students Inc. (ASI)-run program has three facets, according to ASI Outdoor Recreation Coordinator Matt Eaton: a trips program (which Eaton said they're best known for), a rental shop, and an outdoor climbing park at the campus Recreation Center (which is also owned and operated by ASI). Paid for in part by student fees, ASI is a student-driven organization that provides programs, services, employment opportunities, and facilities on campus.

Employing about 100 to 120 students, Poly Escapes gives students an opportunity to get outside by hosting trips to recreational hot spots on the Central Coast and beyond. Through the rental center, students and community members can rent equipment to backpack, hike, paddle, or rock climb at a discounted rate. And the climbing park is open to all skill levels—whether you're an old hat or a newb.

"We are really the avenue to connect Cal Poly students to the outdoors," Eaton said. "Cal Poly students work so hard academically, they work so hard professionally, it's really important to break away, get off campus, and to get outside in general. To refresh, gain some perspective, learn about themselves, and learn about the environment in California and connect with other people."

Eaton said Poly Escapes does about 20 trips a quarter, 60 trips a year, and takes out about 600 students every school year. Employees can man the climbing wall, the rental center, or train to be a trip leader, like Lane.

For Lane, the program fit with her life perfectly. She grew up in Colorado, spent much of her free time outside backpacking and climbing, and traveled a lot. She didn't know much about Poly Escapes, but came upon it at the end of her freshman year. 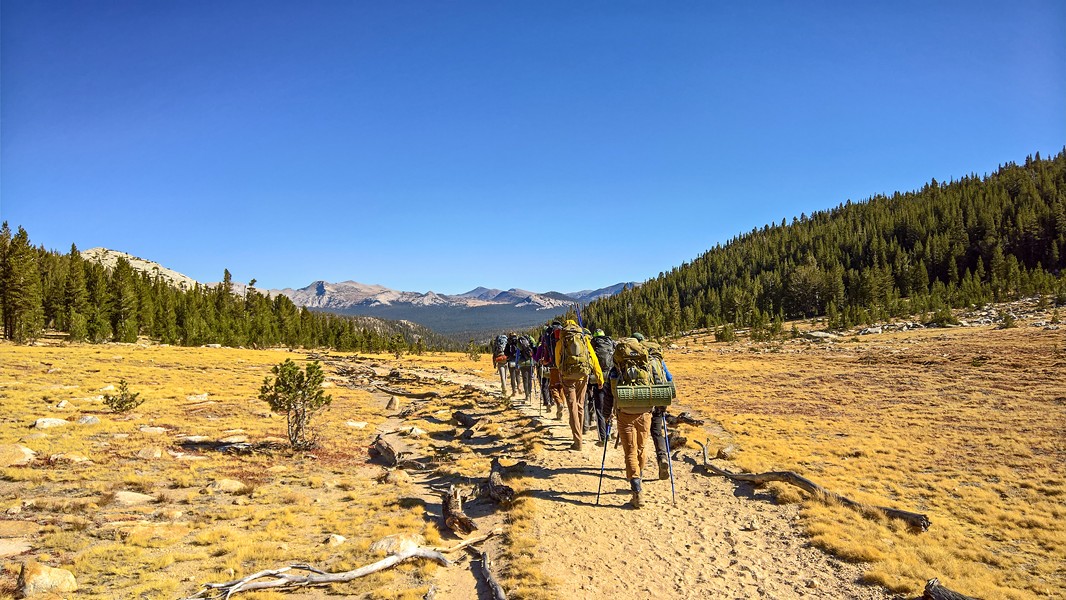 "Immediately, [I] really fell in love with it and met a lot of kindred spirits, a lot of people who were passionate about getting out and not staying in town and partying," Lane said. "It just gave me an opportunity to explore California in a way that I wouldn't have got to otherwise."

But you don't have to be a backpacking fiend or an avid rock climber to join the program. Lane said she's watched students come in with little outdoorsy experience and grow as they learn about what makes being outside so great.

"Choosing Poly Escapes, if you're a little bit unsure about it, isn't going to be a bad decision for anyone," Lane said. "I would say do it." Δ