It's been nearly 11 months since the onset of the COVID-19 pandemic in the United States, and the virus continues to exacerbate existing vulnerabilities in farmworker communities.

Farmworker advocates say that as the health crisis continues, its impacts have only intensified workplace inequalities and economic burdens, household and community-level stress, and even more disparate access to health care, and a lack of social and economic support. 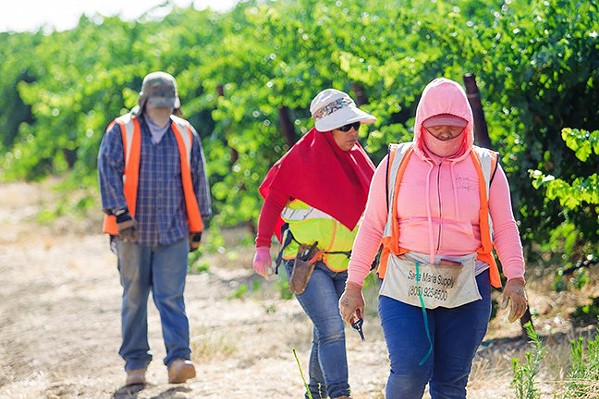 The California Institute for Rural Studies, six social science researchers, and six farmworker-serving community-based organizations released the initial findings of a COVID-19 Farmworker Study in July 2020. The team recently released phase two of the study, in which researchers conducted in-depth interviews with 63 farmworkers throughout California, including on the Central Coast, from August to October 2020. Many of the findings parallel the first study.

Farmworkers continue to experience uneven COVID-19 protections and little enforcement of COVID-19 protocols, the study found. Several workers in the San Joaquin Valley reported a lack of personal protective equipment from employers and little to no social distancing enforcement.

According to recent data from the California State Department of Industrial Relations, the Occupational Safety and Health Administration (OSHA) issued three Salinas-based agricultural operations, with citations for not enforcing social distancing, not placing barriers between workers at harvesting stations, and not requiring employees to wear face coverings at the worksite. The behavior observed by OSHA compliance officers occured from September to December 2020.

The July report also found that agricultural labor demand in California had declined by 39 percent from the three-year average, and 52 percent of phase one survey respondents reported lost work due to the coronavirus.

"Reported reasons for lost work time included both employer-based decisions, such as decreased market demand, and worker concerns of lack of child care or fear of contracting the virus," the study said.

Others experienced sporadic work schedules because employers attempting to reduce the spread of the virus cut back on the number of employees they would allow to work in the same place at the same time.

About 70 percent of workers surveyed during phase one of the study reported more difficulty paying for food than in pre-pandemic times, 63 percent had difficulty paying rent, 60 percent struggled with child care, and 51 percent had trouble purchasing water. The study found that these families often supplemented their income by providing child care for other farmworkers, housekeeping services, or working as vendors at local swap meets.

During phase two of the study, a 38-year-old farmworker from the Central Coast told researchers that his family's income had changed because his wife was no longer providing child care for others.

"Now all the children that stayed home that aren't going to school, they're taking care of themselves. My wife isn't taking care of the kids, and with this, she's not making an income for our household," he said.

While farmworkers with citizenship status were eligible to receive stimulus checks and unemployment benefits, many undocumented families or families of mixed status weren't able to receive that same support. Those who tried to utilize state and county-established hotlines that provided guidance on obtaining federal assistance, told researchers that those avenues were frustrating to navigate.

A 46-year-old farmworker from the Central Coast region said he didn't get any help.

"Sometimes they give a number, and one calls, but no one answers, or they just tell you that they'll call you back, and up to now, no one has called us," he said.

During a Feb. 2 virtual press conference, California Insitute for Rural Studies Executive Director Ildi Carlisle-Cummins said that the entire team behind the study is refining policy recommendations that would reduce barriers and increase access to assistance for farmworkers in the state, expand health care access, increase protections for those who have COVID-19-related complaints, and address language barriers—all regardless of documentation status.

The team recommends a portion of the state budget surplus of $15 billion be invested to ensure farmworkers receive what they need to stay healthy at work and at home. Δ